When the Internet Corporation For Assigned Names and Numbers (ICANN) begins accepting applications for new generic Top Level Domains (gTLDs) in January, there will be a Wild West-style land rush to stake a claim on the Web, according to intellectual property rights lawyers.

So far, there have been only a limited number of TLDs available for companies to claim on the Web. These include the generic variety which includes the most-popular dot-com, and the country code variety such as Canada’s dot-ca. As the popularity of Web sites has taken off, it’s become more difficult to register a domain with your company’s name – for example, Thrifty Car Rental nabbed thrifty.com so Thrifty Foods had to register thrifty.ca.

So ICANN is allowing organizations to register their own gTLDs starting next year. This opens the door for Web sites to be dot-anything; from general categories such as dot-shoes to specific company domains such as dot-Nike. That new opportunity also brings new risk, says Jim Davis, partner at Arent Fox LLP, based in Washington D.C.

“There are significant threats to brand owners and companies,” he says. “Any time you open up a lot of real estate like this, you start to attract the scammers and the criminals.”

For example, a counterfeit product maker could try to snap up a domain name with a manufacturer’s brand name in it. Or a cyber-squatter could try to anticipate what domain names will be deemed valuable to corporations to own.

“It’s going to put a burden on all the brand owners to enforce their trademarks and do more monitoring than they are right now,” Davis says.

The new gTLDs won’t be easy for scammers to pick up. The cost outlay is nothing to sneeze at, requiring a one-time fee of $185,000 and an annual fee of $25,000 for a minimum commitment of 10 years. That’s the cost for the first round of applications that ICANN will be accepting Jan. 12 to April 12, 2012. The greater risk comes from scammers registering Web sites from these new domain operators with a trademark name they could potentially exploit.

But the new gTLD owners and ICANN will have some obligations to make sure the rights of trademark owners are respected, says John McKeown, a partner at Cassels, Brock & Blackwell LLP. That will give aggrieved businesses several ways to prevent their trademark being used, and some methods of recourse if they find it has already happened.

ICANN will do a search on all new domains applied for to ensure it is not identical or “confusingly similar” to another domain, he says. There’s also a legal rights objection process if the new domain isn’t identical, but a trademark holder still feels it is infringing on their brand. In that case, a panel review will decide if there is a conflict or not. 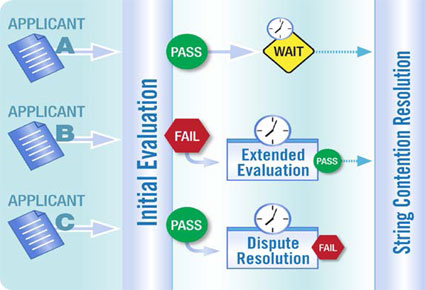 String contention resolution begins once previous evaluation has been completed.

“ICANN wants this to be the last kick of the cat,” McKeown says. “I don’t think it’s going to work that way.” If ICANN’s processes don’t satisfy a trademark holder, they always have the option to take the alleged infringer to court.

Each new registry must also have a sunrise period in which trademark owners have the opportunity to register their domain 30 days before the general public does, Davis says. But businesses will have to be registered with ICANN’s trademark clearinghouse to be eligible for this.

But after the sunrise period, a trademark owner is only notified of a registration that may infringe on their mark after the registration is completed, he says. And that’s only for identical matches, not near-misses or plurals.

“This is really not rocket science, but it’s a big deal and it’s going to be international and it’s going to affect everyone,” Davis says. “Once we start getting into the spring and summer of next year, information will be coming out about the new gTLDs and that’s when you’ll know if there’s a potential conflict.”

Businesses that do find their marks infringed upon can follow ICANN’s Trademark Post-Delegation Dispute Resolution Procedure (PDDRP) to bring their case before a panel. But before doing that, the business must attempt to contact the infringer and give 30 days for response time. If a response is received, then good-faith discussions must be held.

“Some thought is going to have to be given to this one to see if it really makes any sense in any given case,” McKeown says. Businesses may choose to just take an infringer to court and forego ICANN’s process.