And according to a panel of experts, they won’t unless digitalpublishers overcome two problems with e-content aimed at kids: parentswho feel cut out of the reading experience by today’s digital kids’books, and school textbooks that don’t incorporate interactivelearning. 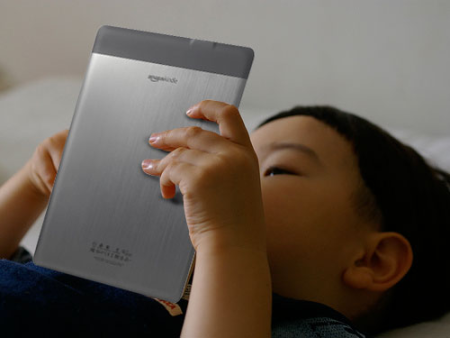 Devices like this Kindle haven’tmade children’s books extinct yet.

The ongoing shift from paper to digital kids’ books was the focus of apanel called “What’s the Next Chapter?: The Current and Future State ofBooks.” It was featured at the INplay 2012 summit on interactivedigital kids’content held in Toronto on Wednesday.

All the ingredients are there for digital books to make paperchildren’s books extinct. Parents are snapping up tabletsand e-readersfor their children to read on. Plus, digital books and e-reader appsfor kids have flooded onto the market, with about 6,000 kids’ book appsavailable in Apple’s App Store alone.

So why haven’t e-books overtaken paper ones as the most popular readingoptions for kids? Since today’s children have grown up with iPads andKindles almost from birth, itseems like digital kids’ book dominanceshould be a slam dunk. But it’s not.

Part of it is because mobile reading devices (and much of theinteractive kids’ content created for them) encourage kids to readalone rather than with their parents, said panelist Anne MartinRichards. That’s just not as fun as opening up a picture book together,she told the conference.

“Do these (devices) take the place of me?” asked Richards. The motherof a three-year-old is also creative director at No Crusts Interactive,a New York firm that designs interactive digital games for kids.

To address that common complaint, digital publishers need to focus more on creating kids’ content that engages parents rather than alienates them, said Dr. James Bower, CEO of Numedeon Inc. The California company is best known for creating Whyville, a virtual online world for kids aged eight to 15.

“If there’s an alternative (form of digital content) that parents canactually see and understand, they’ll give (their kids) an extra halfhour on the computer” instead of kicking them off of it, Bower said.
The other frontier in digital versus traditional kids’ books istextbooks, which Bower declared an endangered species.

“Who thinks textbooks have a future?” he asked the audience. “I don’tthink they do…Paper textbooks are basically dead.”

It’s no wonder. Bower noted that California governor ArnoldSchwarzenegger passed a law banning the state’s school boards frombuying paper textbooks, so now only digital ones can be purchased.Similar policies have been adopted in Texas and Florida, Bower said.

The move to digital textbooks hasn’tworked, though, he said, becausepublishers simply took the exact same content from paper textbooks andtransferred it into digital format. Instead, they need to reshapeschool curriculum entirely to reflect the interactive learning stylekids have become more comfortable with through using the Web and mobiledevices, Bower suggested.

“With the digitization of textbooks, you’re going to find that theydon’t work. And because they don’t work, they’re not used (by kids andteachers),” he said. “Textbooks are single person entities. TheInternet is a social cooperative space. Textbooks won’t live there(either)…If you can’t figure out a way to make it social, it won’tfly,” he said.

New technologies (including self-publishing tools like Apple’s iBooks)have made publishing high quality e-books and reading apps easier,faster and cheaper than ever before. But that means there’s now waymore content on the market — so the competition to grab readers isgetting fierce. Since 90 per cent of apps have 1,000 or fewerdownloads, e-publishers must explore other ways of distributing theircontent to widen its potential reach, said panelist Dave Skwarczek,president of Eat Your Lunch LLC. The Los Angeles firm makes digitalkids’ media content for clients such as the Sesame Street franchise andCanadian toymaker Spin Master Ltd.

Greater competition is driving publishers to put out kids’ materialsthat are richer than ever, including games, books and stories that areimmersive (with children becoming the characters), interactive,non-linear (kids choose what happens next), and data-aware (the storyor game changes to reflect the weather, location or other variable inthe reader’s surroundings), Skwarczek said.

The bumps along the road from print to digital are to be expected,Bower said: “This is the biggest change in technology in 600 years.”

“Most of them are not going to survive. The medium itself is changingand (for) what little people expect, the bar is really high,” saidParikh. The KiteReaders division of his Sunnyvale, Ca. firm released 50new children’s e-books and apps last year.

Christine Wonghttp://www.itbusiness.ca
Christine Wong has been an on-air reporter for a national daily show on Rogers TV and at High Tech TV, a weekly news magazine on CTV's Ottawa affiliate. She was also an associate producer at Report On Business Television (now called BNN) and CBC's The Hour With George Stroumboulopoulos. As an associate producer at Slice TV, she helped launch two national daily talk shows, The Mom Show and Three Takes. Recently, she was a Staff Writer at ITBusiness.ca and is now a freelance contributor.
Previous article
Wozniak spills beans on why Steve Jobs loved secrecy
Next article
Plugable aims to offer small businesses, schools $50 thin clients