What can be learned from the government’s cybersecurity bungling

Would you sleep at night knowing your business is only protected from cybercriminals during regular banker’s hours?

Apparently the bureaucrats in Ottawa thought that plan was just a-okay(or is that ‘eh-okay’?) for this country’s entire IT security strategy.As detailed in our source story from the Globe and Mail, therecentauditor-general’s report really stuck it to the feds’ cybersecuritystrategy, pointing out that the Canadian Cyber Incident Response Centre(CIRC) only monitors suspicious stuff from 8 a.m. to 4 p.m.

Related Story | How to avoid an Ontario Elections style breach

Coincidentally, Ottawa announced shortly before the A-G’s report cameout that CIRC’s hours will be extended to 15 hours per day. So ifyou’re a hacker, now you only have a daily nine-hour window when noone’s really minding the store.

We dialed up security expert Tony Busseri for his take on the report.His main takeaway? After spending over a decade (and hundreds ofmillions of tax dollars) to develop a cybersecurity strategy, Ottawahas done far worse than most businesses in moving to keep its data andnetworks safe. 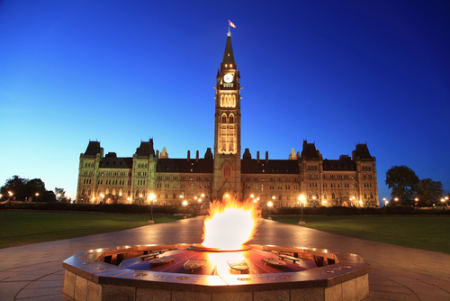 It’s 11 o’clock Canada. Do youknow where your government data is? (Photo: Shutterstock)

“The Canadian federal government’s (cybersecurity) response and programis an example of what businesses shouldn’t do,” said Busseri, CEO ofToronto-based IT security firm Route1.

Security tips
Busseri offered us some tips, based on the mistakes made by Ottawa,that Canadian businesses of any size can use to protect their ITassets.

Use two-factorauthentication: This usually entails a device (like asecurity smartcard that goes into a USB port) plus a passcode enteredby the user. “It’s something you have (the device) and something youknow (the code).”

Honour thy firewalls:“Use a solution where the data’s never going beyond the firewall of thenetwork, not a VPN or a browser-based solution that pulls data fromyour network to a remote access point.”

Be open to newersolutions on the market: “It’s not that the bad guys aretoo smart. It’s that (the feds) are being really dumb around theadoptionof new technologies.”

Christine Wonghttp://www.itbusiness.ca
Christine Wong has been an on-air reporter for a national daily show on Rogers TV and at High Tech TV, a weekly news magazine on CTV's Ottawa affiliate. She was also an associate producer at Report On Business Television (now called BNN) and CBC's The Hour With George Stroumboulopoulos. As an associate producer at Slice TV, she helped launch two national daily talk shows, The Mom Show and Three Takes. Recently, she was a Staff Writer at ITBusiness.ca and is now a freelance contributor.
Previous articleIT World Canada president honoured with Queen’s Diamond Jubilee Medal
Next articleJolt startups get jump start at demo day