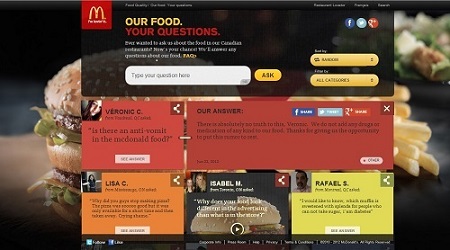 Canadian marketing companies garnered a number of wins at the 17th annual Webby Awards this year, scoring nods for their work in advertising, public service and activism.

Last June, Tribal DDB Toronto set up an online campaign for McDonald’s called “Our food. Your questions.” It allows Canadians to type in 140-character questions about food quality, ingredients and menu items at the fast food super-chain. The questions are then answered with either text or video.

McDonald’s Canada later featured “Our food. Your questions” as an ad during the Canadian broadcast of the 2013 Super Bowl.

Other Canadian winners include electropop singer Grimes, who scored “Webby Artist of the Year,” and pop celebrity Justin Bieber for his social media campaign in launching his new fragrance, “Girlfriend.” The National Film Board also took home a win for its interactive Web documentary, Bear 71, which won “Best Net Art (General Web site).”

Thanks to your support, I won both #Webbys (juried & People's Voice) for overall social presence http://t.co/cUyCxssYwO

We're thrilled to announce @frank_ocean as this year's Webby Person of the Year – http://t.co/yuKpH90GLe #webbys

The ceremony will be streamed online from New York City at www.watch.webbyawards.com, starting at 9 a.m. ET on May 22. This year’s host will be comedian Patton Oswalt, who has appeared on Comedy Central, “Late Night with Conan O’Brien,” and most recently, The Newsroom, a drama from HBO.

Candice Sohttp://www.itbusiness.ca
Candice is a graduate of Carleton University and has worked in several newsrooms as a freelance reporter and intern, including the Edmonton Journal, the Ottawa Citizen, the Globe and Mail, and the Windsor Star. Candice is a dog lover and a coffee drinker.
Previous articleBlackBerry Q10 hits Canadian stores
Next article4K monitors’ future bright because ‘people love pixels’