Torontonians can now use Uber’s mobile app to order a taxi.

Uber has raised about $45 million in venture capital since it was founded in San Francisco in 2010. Its service – which also allows customers to order cars for hire on demand using its mobile app – is now available in 18 cities around the world, including Toronto as of March 2012.

That original system using livery cars and drivers exclusively employed by Uber will continue in Toronto. But Tuesday morning the company officially launched a similar service for taxi orders after doing a pilot test during the Labour Day weekend. Not surprisingly for a holiday long weekend, demand is already proving strong.

“Including our test over the weekend, we’ve had a few hundred(customers),” said Andrew Macdonald, general manager of Uber Toronto. 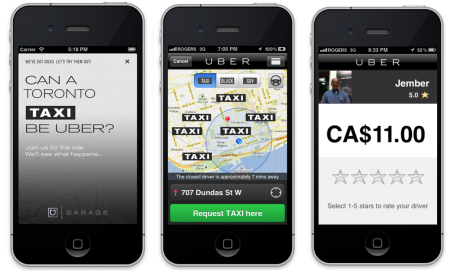 Uber is now promoting its new taxiservice which officially launched today in Toronto.

He wouldn’t say exactly how many customers and taxi drivers have used the system so far.

“We’re adding dozens (of taxi drivers) every day and they’re referring their friends on a daily basis. We’re going to be scaling (service)every day,” Macdonald said.

How it works
Here’s how it works: Uber has teamed up with some Toronto taxi drivers(some work for local cab companies, some are independently cab drivers still licensed by the city) to ensure they can fill mobile requests from Uber app customers who want taxis. The Uber app (available for Android, iPhone and mobile browsers for other phone operating systems)lets customers track where their taxi is by GPS and also emails them a receipt for the fare they paid. Uber bills the fare directly to the customer’s credit card.

Uber isn’t cutting into the money made by the taxi companies or the cabdrivers, however. The app itself is free to use for cab drivers and passengers. The regular metered fare still goes to the cab drivers and their companies, but a 20 per cent gratuity fee is automatically charged on top of each ride; Uber generates revenue by taking a cut of that 20 per cent fee.

“Some (cab) drivers are independent and some drive for a company. Wework directly only with licensed drivers and we help them supplement(their income). The same way they can pick up a street hail, they canuse Uber for (filling taxi requests),” Macdonald explained, “as long as they’re fulfilling their obligations to their (taxi companies).”

Although Macdonald said Uber taxi rides cost about 30 to 40 per cent more than regular taxi fares, he points out that includes the 20 per cent gratuity. Uber’s taxi service has also been tested in Chicago and will be officially launched in New York City soon, Macdonald said.

Along with $45 million in venture capital, Uber has also attracted the attention of transportation regulatory officials. Its original delivery car service was threatened with shut down orders in San Francisco and Washington, D.C. for allegedly operating an unlicensed taxi or limousine service. But a social media outcry from Uber supporters successfully helped thwart both regulatory probes. In the most recent incident, Uber’s car hiring service was shut down for 12 hours over concerns that a smartphone with GPS is not a device licensed to calculate limousine fares in the state of Massachusetts. Yet another social media campaign supporting Uber helped restore the company’s operations in Boston.

Related Story | In-car tech that could save your life

“Every market has unique challenges. This is a disruptive technology.And if we go into a new market there can be people who are resistant to change. What happened (in Boston) was there were some issues butultimately customers stepped up and said ‘We want this service,’”Macdonald said.

Uber hasn’t had any formal discussions yet with Toronto taxi and limocompanies or their industry groups, Macdonald said. Asked if Uber anticipates scrutiny from Toronto licensing officials, he said Uber has“an ongoing dialogue” with City of Toronto officials and that none ofit has been “negative” towards Uber operating here.

In terms of competition driving up alongside Uber in Toronto’s taxi app market, there’s UK-based Hailo (is hailing itself as the first companyto be granted a license for an app-based taxi service in Toronto),local company Tap’n Ride and a free iPhone app launched by Beck Taxi.

Christine Wonghttp://www.itbusiness.ca
Christine Wong has been an on-air reporter for a national daily show on Rogers TV and at High Tech TV, a weekly news magazine on CTV's Ottawa affiliate. She was also an associate producer at Report On Business Television (now called BNN) and CBC's The Hour With George Stroumboulopoulos. As an associate producer at Slice TV, she helped launch two national daily talk shows, The Mom Show and Three Takes. Recently, she was a Staff Writer at ITBusiness.ca and is now a freelance contributor.
Previous articleOoomf gets $500,000 vote of confidence for app discovery platform
Next articleReal-time map of Kickstarter projects to launch Monday