Uber admits it has work to do in public diversity report

Uber Technologies Inc., the addictively convenient yet scandal-ridden Silicon Valley-based ride-hailing giant, has taken a long, clear look at its diversity numbers and knows that it’s coming up short.

However, if one is basing the success of Uber’s efforts to increase diversity solely on its employee base, there is no stepping around the company’s low marks: globally, nearly 64 per cent of employees were men, while nearly half were white (and more than 30 per cent were Asian – a common occurrence in Valley-based tech firms). 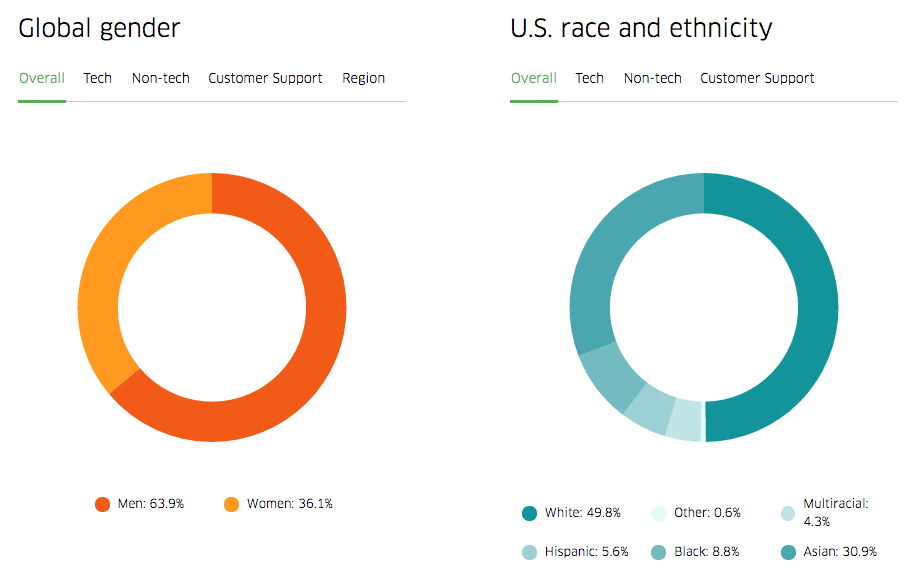 “It’s no secret that we’re late to release these numbers,” Hornsey wrote. “And I’d like to thank our employees for their tenacity in arguing the case for greater transparency—because what you don’t measure, you can’t improve.”

In order to recover from its recent PR nightmares, which have included a viral blog alleging a company culture of sexual harassment, a viral video of CEO Travis Kalanick harassing one of the company’s drivers over declining fares, and the public resignation of a president appointed to remake the company culture that led to them, Uber is now focused on improving three aspects of its organization, Hornsey wrote: leadership and accountability; its relationship with drivers; and its culture and organization – including workplace diversity.

“While there are many things we need to change about our culture, I believe that making Uber a more diverse and inclusive workplace is key,” she wrote.

To address its lack of diversity, the company plans to increase its presence at recruiting events across the country and at historically black and Hispanic colleges and universities, Hornsey wrote. It also plans to commit $3 million USD over the next three years to support organizations aimed at increasing the number of women and underrepresented groups in tech, with existing employees taking a leading role in choosing which organizations to partner with.

Uber also plans to quickly build support and engagement teams for key functions such as diversity, people operations, legal, and policy and communications, all run by women on the company’s management team, she wrote. The company will also be seeking advice from diversity and inclusion experts, and from others in the tech industry “who have been working on these issues for longer than we’ve been around, and who are working to make change happen.”

“We’ll keep you updated about what we’re learning and, importantly, how we’re implementing the great ideas we hear about,” she wrote.

Hornsey also noted Uber’s pride in creating an inclusive environment for members of the LGBTQ community, which earned the company a top score of 100 on the Human Rights Campaign Foundation’s 2017 Corporate Equality Index.

“No matter where you come from — and 15 per cent of our U.S. employees have work visas, immigrating from 71 countries — we want you to know that you have a place at Uber,” she wrote. “And we will continue to speak out against discrimination.”

Eric Emin Wood
Former editor of ITBusiness.ca turned consultant with public relations firm Porter Novelli. When not writing for the tech industry enjoys photography, movies, travelling, the Oxford comma, and will talk your ear off about animation if you give him an opening.
Previous article
Samsung highlights AI assistant, edge-free display in official reveal of Galaxy S8
Next article
PayPal releases mobile app for SMBs