Two-thirds of Canadian SMBs run Windows 7, or plan to this year

Calgarian Lanny Meyer doesn’t care to spend much time thinking about whatsort of operating system his Hearth and Home Fireplace Specialties Ltd. business should use – he just wants it to work.

“We only spend time thinking about it when it’s not functioning right, and then you realize how much you rely on your OS,” the president and general manager says. “Most of us are happy as long as our system is working, then we don’t care what operating system is running.”

Meyer’s business – which does exactly what the name implies, installing fireplaces into homes – operates with 10 core employees and 12 sub-contractors. Those workers use 14 desktop PCs, 12 of which run Windows XP and two that run the more updated Windows 7 because “that’s what came with them,” he says. The PCs are used mainly to run a point-of-sales system from a main server and access employee e-mail and productivity software in the form of Microsoft Office. 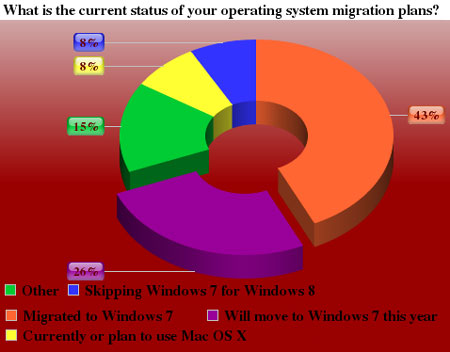 Windows 7 is in the cards for most Canadian SMBs.

Hearth and Home isn’t alone in its complacency towards what operating system runs on its PCs. In the 2011 ITBusiness.ca Sate of the Canadian SMB survey, more than a quarter of respondents said they hadn’t migrated to Windows 7 yet, but planned to do so this year. Another eight per cent said they’d skip Windows 7 altogether and wait for Windows 8 to come out.

Meanwhile, many businesses have made the upgrade to Windows 7 already. Forty-three per cent of SMBs say they’ve completed the migration, and another eight per cent operate in a Mac OS X environment or plan to move there soon.

Ever since Microsoft Corp. introduced Windows, it has become the de facto operating system of choice for small businesses everywhere, and nothing has changed drastically in 2011. A Toronto-based Microsoft Gold channel partner, CMS Consulting Inc., reports that Windows 7 migrations has been its largest source of revenue since the OS was launched two years ago. That trend is going to continue in the short term, says Alex Chan, vice-president of business development for the solutions provider.

Despite CMS’ business success in rolling out Windows 7, most SMBs don’t use a third-party service provider to implement a new OS. Only 6.8 per cent of respondents reported doing this in the ITBusiness.ca survey. But this was the option Cirrus Environmental Services Inc. went with. The Calgary-based regulations consultant relied on service provider CTech consulting Group Inc. to migrate from Windows XP to Windows 7 in October. 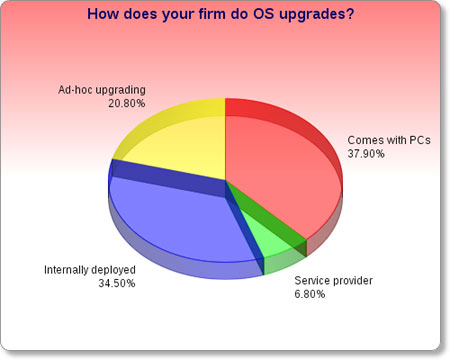 OS upgrades look to be done as-needed at SMBs.

Cirrus manages 20 desktops and four laptops, according to president Greg Whyte. The firm typically upgrades its IT equipment every five years, but the 2009 downturn caused them to delay until this year. That extra wait to upgrade computers was starting to affect more than office productivity.

“We had a team meeting and people were saying that efficiency was dropping, and so was morale, most importantly,” Whyte says. “They have enough to deal with on the job without worrying about their computer crashing or their document being an outdated format.”

Whyte estimates the cost of upgrading his office desktops, screens, industry-specific software (like AutoCAD), Windows 7 licences, and managing the project to be more than $15,000. But the cost is worth it in his eyes, and he found the migration less painful than the other two he’s been through. The immediate benefits have been seen in more responsive internal networking for tasks like document sharing and printing – but it also goes beyond that.

“Generally, there are a lot more smiling faces in the office,” he says. “People are much happier coming to work every day.”

Most Canadian SMBs are just using whatever OS happens to come loaded onto the new PC they buy (37.88 per cent). That’s the approach of Meyer, who is also a CTech client. His approach is to replace a PC “whenever it breaks down.”

That’s not the approach recommended by CMS’ Chan. “Some due diligence should be done to explore the technology out there that has changed in managing your desktops,” he says.

CMS often runs a seminar on Windows 7 deployment and many small business workers are surprised by the capabilities the more modern OS offers. “Eyes and ears are often opened,” Chan says. “They’re surprised by the control you can have over desktops, and the automation available.”

Other SMBs are internally buying licences and deploying them (34.47 per cent), or upgrading machines on an ad-hoc basis (20.82 per cent).

Microsoft will be releasing Windows 8 at some point next year (they have already given out thousands of touch-screen tablets to developers in an early preview), but with most businesses having just upgraded to Windows 7 or planning to do so soon, the prospect of moving to another OS is just an abstract concept at this point.

For Hearth and Home’s Meyer, he has never heard of the yet-to-be-released operating system and hasn’t thought about when he’d buy it. Likely, it will be sometime in 2013 when one of his Windows XP machines finally bites the dust.