Toshiba Corp. is putting out an 8-inch touch screen tablet this month, which it describes as a pocket-sized device that runs the full version of Windows 8.1.

Running on an Intel Atom processor and with the smaller screen size, you might expect Toshiba’s new Encore tablet to run Windows RT 8.1, the lighter version of Windows 8 that Microsoft Corp. designed to run on lower-powered processors used for mobile devices. But with Intel’s chips for mobile devices coming down in price and offering similar battery life to the popular ARM chipsets, it may be that fewer manufacturers see a need to sacrifice the additional capability offered by Windows 8. (Windows RT for example, won’t run Windows legacy software compatible with Windows 7 and earlier. It is limited to the Windows Store apps.) 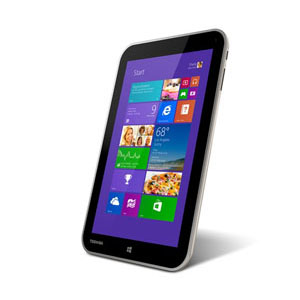 Encore sports a 1280×800 resolution screen, an 8-megapixel camera, stereo speakers, and the full array of sensors you’d expect in a modern tablet. With Intel’s InstantGo feature, the device will be able to receive pushed updates while in sleep mode.

Toshiba says the tablet is made with Skype conversations in mind, with on-board dual microphones and a 2-megapixel front facing camera. It also comes Office Home and Student 2013 so you can open and edit all those Microsoft Office documents you work with on a regular basis.

Related
Will Windows RT go the way of the Zune?

The tablet offers 32 GB of internal storage, has a micro USB port, micro HDMI port, and a micro SD card slot to support 64 GB of additional external storage. It weights 479 grams and is 10.6 mm thick.

The Toshiba Encore tablet costs $349.99 and will be available at major retailers.

Windows RT wasn’t embraced by manufacturers upon its release last year and even Microsoft’s Surface tablet suffered in the sales department. Microsoft continues to push the OS with its revamped version on the Surface 2, but if manufacturers like Toshiba are managing to run the full Windows 8.1 on slim form factors at lower price points, then you have to wonder what’s the point?

Brian Jacksonhttp://www.itbusiness.ca
Editorial director of IT World Canada. Covering technology as it applies to business users. Multiple COPA award winner and now judge. Paddles a canoe as much as possible.
Previous article
Top 6 videos on ITBusiness.ca for 2013
Next article
Moneris unveils mobile payments with Apple Passbook