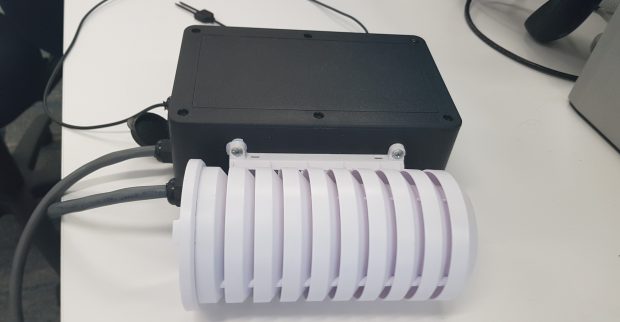 While the saga on Toronto’s waterfront continues, Matthew Tenney quietly solders sensor wires in his apartment. He’s focused on a separate project that’s gathering data for the city, one which he says will not only engage Toronto’s citizens, but sidestep challenges presented by traditional – and expensive – sensors that are difficult to control and gain insights from.

“Instead of going down the same track of putting out these massive request for proposals…and installing off-the-shelf sensors that are not in the control of the city and its citizens, I decided to build something on my own,” Tenney, the city’s data science and visualization team supervisor, who’s worked for The City of Toronto for a year, tells ITBusiness.ca. “We don’t have off-the-shelf problems, so why are we trying to use off-the-shelf solutions?”

That something is an open-sourced sensor built with Raspberry Pi open hardware, called IoTES (Internet of Things – Environmental Sensors). The hardware is slightly larger than a credit card and slower than a modern laptop or desktop, but as a complete Linux computer, it can do a wide-range of tasks at a low-power consumption level, such as act as a sensor. It appeared to be the perfect device for Toronto’s ongoing quest to become a data-driven city.

“When I first began working for Toronto, I met with people across the city who had similar things to say. ‘Hey Matt we would love to do this but we don’t have the data.’ So, these low cost, very configurable sensors can help us pinpoint data sets and help us begin to target very specific problems across the city,” he explains.

The challenges facing the city’s various divisions were wide-ranging, but almost all of them could be tied to an absence of specific data. After learning the needs of the city’s urban forestry, transportation, and energy and environment divisions, Tenney built two of the devices last summer in his apartment. They were field tested in the fall, and successfully transmitted basic air quality metrics back to city staff.

The city then issued a public bid for the assembly of 10 additional devices using the open Raspberry Pi hardware – the bid was won by a Toronto company called Elecmetech – which Tenney says will soon be placed on hard-surface trees, street sweepers and a few streetcars on King Street. The goal is to observe the devices during a four-month proof of concept study to gauge the effectiveness of the sensors across different environments. A key feature of these devices is the ability swap sensors that, for example, can monitor wind speeds and soil conditions, and be used in multiple configurations. The city’s current lineup of sensors are much more expensive and not as malleable as the Raspberry Pi’s, says Tenney. For the urban forestry division, the potential of IoTES devices are far-reaching.

“Right now, we have no way of knowing how soil conditions are affected after a big weather event,” explains Tony Lucey, supervisor of commercial trees and urban forestry.

Soil samples are currently obtained manually by staff, a tedious process that could be streamlined with a sensor feeding data regularly to Lucey and his department. In the summer, droughts are a regular occurrence, and there’s no way of knowing what trees need immediate attention, and which ones can wait. Lucey says melting snow, waste and other factors have an undeniable impact on soil conditions as well, but there’s no way of measuring them. Lucey and urban forestry planner for commercial trees, Alex Rudolfs, envision having the ability to dispatch staff to areas where trees need watering the most based on data. Even if the data streaming in isn’t in real-time – a detail Rudolfs says is still being ironed out – having a number of connected devices feeding them information regularly from the front lines would save staff time and resources.

“At the bare minimum, we’ll be able to capture information about soil conditions, which is something we weren’t doing before,” explains Rudolfs.

Lucey points to a map on the wall, highlighting the city’s 25 wards, indicating that it would be nice not having to drive across the city to take samples.

“We have a lot of ground to cover,” he says.

Open is the name of the game

Tenney is working to publicly post the IoTES specs in order for individuals and working groups to build their own sensors and share data with the city. While it’s unclear what type of interest the initiative will garner among the public, it’s important for that optional engagement to be available, says Tenney.

“The best way for us to identify the issues and information gaps is through an open data policy,” he says. “When many minds come together and think of a new way to approach a data set that I’ve been staring at for a long time, that’s when innovation really happens.”

Toronto has made major strides towards fostering an open culture around data, an effort that culminated in the launch of an Open Data Portal in May 2018. Tenney stresses the point that collecting any and all data is pointless if there’s no specific objective, and the city’s other devices collecting data are deployed with surgical precision. He cites a webcam with low-level computer vision capabilities that tracks the number of people entering and leaving Toronto’s respite centres.

“We don’t want the video or any identifiable information. We’re just collecting the numbers, and counting the number of people crossing the imaginary line,” he explains. “Privacy is a huge concern for me.”

Tenney is one of many speakers at this year’s Technicity event in Toronto. For more content from the event, click here.