Editor’s note: This review is part of our series on the top 10 smartphones released this year. The series was designed to explore how business users can be productive with these devices, and how they can take advantage of the devices’ features during the workday.

This is part 2 of our review of the iPhone 6. This section of the review focuses exclusively on the iPhone 6’s camera.

To read part 1, which looks at the phone’s hardware and design, head on over here.

And for part 3, which looks at the phone’s operating system, iOS 8, go here.

The camera hardware on the iPhone 6 has not changed significantly from the hardware that came with the iPhone 5S. It still uses an 8 megapixel (MP) BSI Sony sensor, which may be a disappointment for those hoping Apple would upgrade its resolution to match the 13 to 20 MP cameras found on many Android phones. It also has the same f/2.2 aperture and five-element lens.

There is a good reason though for Apple to stay with a comparably lower MP count than its competition – pixel size. Since a smartphone camera sensor is limited in physical size due to the small amount of space available to the camera module, the lower the MP count is, the bigger the pixel size is on it. The pixels on the iPhone 6 are quite big for a smartphone at 1.5µ (like the iPhone 5S’), which substantially improves performance in low light.

Despite the pixel size not changing from the 5S, Apple has upgraded one aspect of the sensor by adding what they are calling ‘Focus Pixels.’ This addition translates to the iPhone 6 camera having phase detection autofocus, making focusing on the 6 noticeably faster than the 5S and comparable to that of the top Android phones. Phase detection also allows for continuous autofocus in videos, which is a big bonus.

The A8 SoC also has a new, faster image signal processor (ISP), which helps with the focus speed, effects like HDR, and enhances noise reduction for better low light photographs.

One hardware feature that is missing (that is found on the larger iPhone 6 Plus) is optical image stabilization (OIS). Since we are pretty sure there was no technical reason OIS could not have been included on the 6, the decision must have purely been for cost and to further differentiate the Plus from the regular model.

The front-facing camera, while still only 1.2 MP, has been improved to have a better f/2.2 aperture – the 5S’ was f/2.4 –  which means the FaceTime experience in low light is going to be much improved. 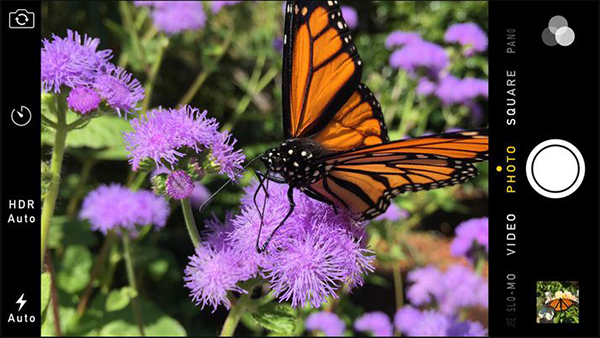 The camera interface (shown above) on the iPhone 6 has not changed much from that on the iPhone 5S, which is a good thing. The simplicity of the iPhone camera UI is one of its strengths, especially for business users.

The iPhone still does not have a lot of different camera settings you can adjust, unlike many of its Android competitors (some of which have too many adjustable settings). For still photos, the only adjustments you can make are to turn the flash on or off, turn HDR on or off, and new to iOS 8,set a timer There are no manual controls, other than being able to adjust exposure compensation by sliding your finger up or down the screen.

The only camera modes the iPhone 6 has are being able to change the image aspect ratio to ‘square’ (handy when shooting for Instagram) and a panoramic mode. The latter mode has been substantially upgraded on the iPhone 6, shooting 43 MP images vs. the 28 MP of the 5S.

While there are no manual controls on the iOS 8 camera app itself, Apple has opened up its camera API to third-party developers. Now they can create apps that will offer complete control, from ISO settings to manual focus. One example would be the Camera+ app.

In iOS 8, Apple removed one key camera feature, the Camera Roll. On previous versions of iOS, it gave you a view of all your photos in one place, sorted by date. In iOS 8, there is only a Recently Added view that shows the last 30 days and the regular albums that images are sorted into. Since many users missed the Camera Roll, in iOS 8.1, coming on Oct. 20, Apple has added it back. Apple is also enabling the new iCloud Photo Library in beta in iOS 8.1, which you can learn more about here. 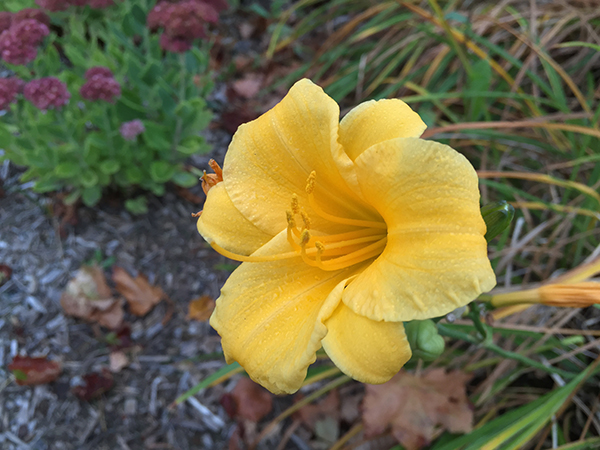 The picture above was taken in good light and is an HDR photo. As you can see the quality is very good, and the HDR is very subtle. This is due to a combination of the subject matter, and because the iPhone’s HDR mode is not as aggressive as those found on other phones. Another nice feature is that by default, when you shoot in HDR, a non-HDR copy of the image is also saved.

Throughout our time testing the iPhone 6, we found the most impressive aspect of its camera was that it was the most consistent we have ever used. Ninety-nine per cent of the time, despite the fact the only shooting mode is automatic, the iPhone 6 delivered excellent photos, with great clarity, accurate colours and good dynamic range.

The only weakness that it has is also one of its strengths. While the 8 MP sensor means bigger pixels for better low light performance, it also means that when you zoom in or crop an image,  there simply is not as much detail as higher MP pictures. This makes it challenging to recompose images and still keep the same level of detail. 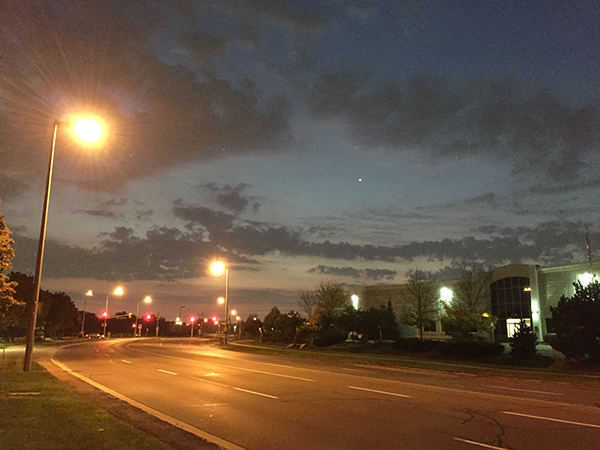 The picture above, while not the most artistically interesting, does show off the iPhone 6’s low light performance. However, in more challenging conditions with more motion, having OIS would be beneficial, and as mentioned before, it is a pity that Apple reserved this feature for the 6 Plus.

On the video side of things, Apple has added quite a few new features – in fact, more than they have added to the still image side of the house.

The iPhone 6 can now shoot 1080p video at 60 frames per second (fps), and record even slower slow-motion video – 720p at 240 fps. As previously mentioned, the phase detection autofocus allows for continuous focusing while shooting video, and there is also a new digital image stabilization feature too. Lastly, the iPhone 6 can now create time-lapse videos using still images, a feature we unfortunately didn’t get a chance to test at the time of this review. You can see a sample time-lapse video on Apple’s iPhone 6 camera features page.

Our overall impression of the iPhone 6’s camera is that one of the best just got better. For business users who are looking to take great photos with the least amount of effort, there isn’t any better smartphone out there.

More photos taken with the camera hardware on the iPhone 6: 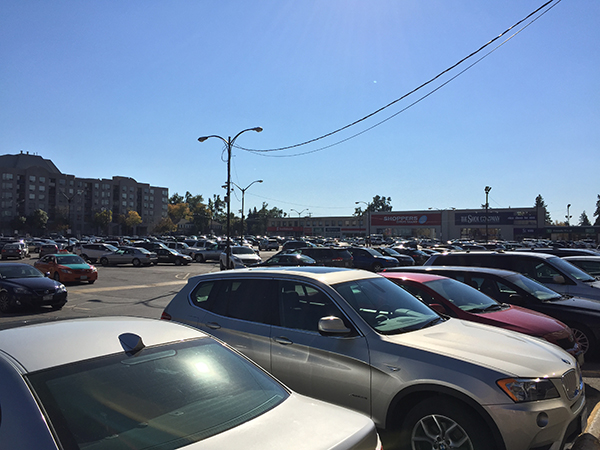 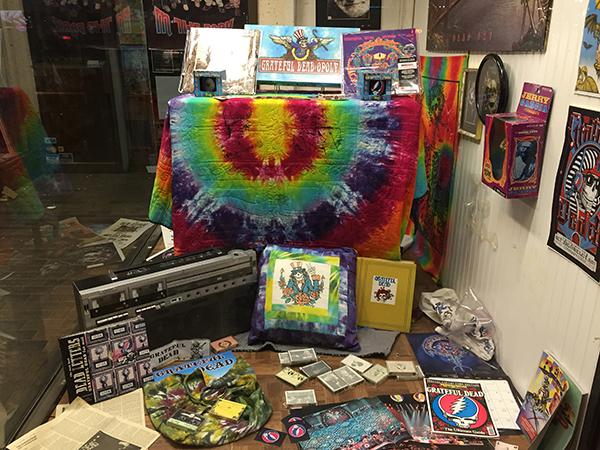 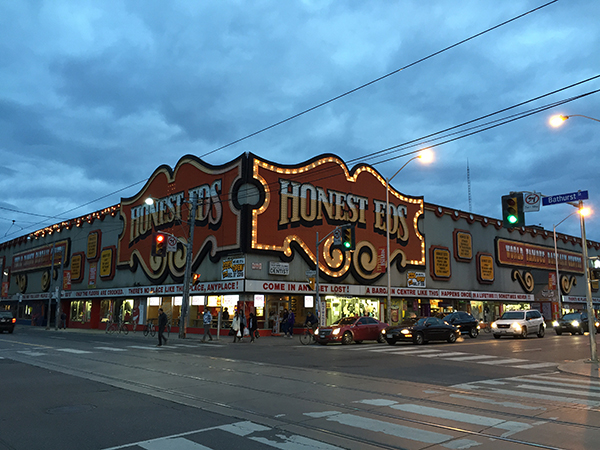 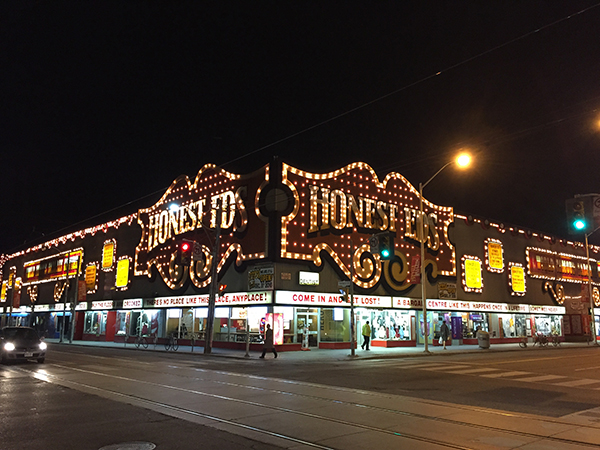 To read part 1, which looks at the phone’s hardware and design, head on over here.

And for part 3, which looks at the phone’s operating system, iOS 8, go here.