The one advantage Apple Watch has that Pebble, FitBit and Samsung don’t

For all its marketing savvy, its flair and hipster appeal, the Apple Watch may succeed for an entirely different reason.

The company unveiled today new details of its first smartwatch offering, one that is set to compete in the fledgeling wearables market.

It’s set to compete with the likes of the Pebble and Fitbit as well as devices made by Sony, Lenovo and LG, who have all shipped several hundred thousand units apiece worldwide in 2014.

Pebble is launching a new, thinner smartwatch with a curved design, colour e-paper display and a microphone. And...

Leading the pack is Samsung, who sold 1.2 million units last year.  Meanwhile, trailing in a distant second and third are Pebble and Fitbit, with 700,000 and 600,000 shipments respectively, according to market research company Statista.

Yet according to Kevin Paul Scott, co-founder of ADDO, a brand consulting agency, Apple will have a leg-up over Samsung in its retail space.

“From a purely technology perspective, no, Apple has no advantage,” said Scott.  He explained that selling the Apple Watch, which the company is pushing as a fashion accessory or piece of jewelry, will require a different environment than selling technology.  With the ability for Apple to revamp its stores to make them more akin to jewelry stores – and rumours that it will do so – the company is best positioned to shift public perspective.

“Years down the road, by the time people realize that something like Android has better technology, Apple will already have taken the lead on wearable technology,” Scott said.  “Companies will have to prove their supremacy over time.” 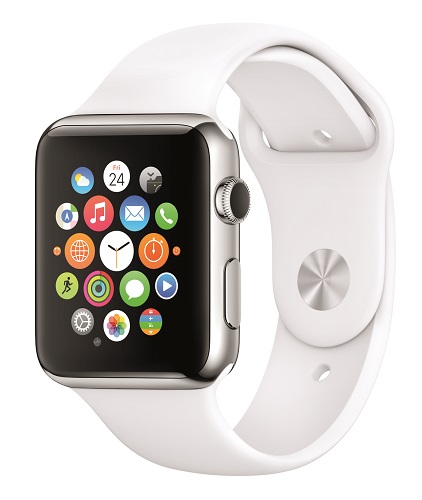 Apple’s “Spring Forward” Event, the company announced that the watch would be coming first to nine countries, including the US and Canada, Australia, China, France, Germany, Hong Kong, Japan and the UK.

Apple’s offering features an 18 hour battery life, and will charge through wireless magnetic induction.  In functionality, it will display notifications from apps such as Facebook, as well as allow for touch and voice controls through Siri.  In addition, the watch comes with a slew of fitness sensors to gauge workouts and heartbeats.