The launch brought no new revelations about the program Startup Canada has been promoting since starting its tour with a town hall meeting in Halifax on March 19. It did feature an appearance by John Baird, Minister of Foreign Affairs, who praised the initiative and read excerpts from a letter of support from Prime Minister Stephen Harper.

“I commend the founders of Startup Canada and the organizers of this inspired nationwide campaign,” Harper wrote. 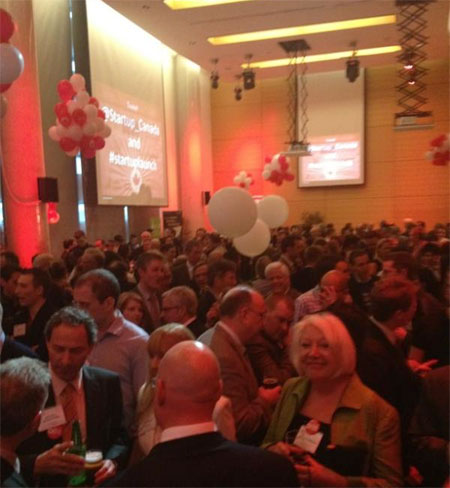 The government’s commendation doesn’t come with financial support. Victoria Lennox, co-founder of Startup Canada, said the organization has no government funding, surviving on sponsorships and philanthropy, and remains an all-volunteer organization. It will continue with a 30-city nationwide tour, asking entrepreneurs and would-be entrepreneurs what they need to help them launch and build their businesses.

From that series of town hall meetings, Lennox said, will emerge an action plan for the next few years and a white paper of recommendations to government.

Lennox also hopes to announce more specific projects like Co-working Cape Breton in Sydney, N.S., which is setting up shared work space for small entrepreneurs across the island. The project grew out of Startup Canada’s town hall meeting in Sydney.

The national launch also featured serial entrepreneur Sir Terence Matthews, who told the packed reception at the University of Ottawa that he has founded some 90 companies “because it’s fun” and urged aspiring entrepreneurs to focus on customer needs and give their employees ownership stakes in their companies.

At a panel discussion preceding the launch event, a half-dozen young Canadian entrepreneurs painted a mostly positive picture of the current Canadian climate for startups, though some said Canadians need to embrace more risk.

“We’ve got to stop bitching about funding,” said panelist Scott Annan, founder of Mercury Grove, an Ottawa startup incubator. Acknowledging that financing is harder to find in Canada than in the U.S., Annan said, “suck it up – the bar is higher.”

But Annan also told the overflow crowd that Canadians could do more to support home-grown businesses by buying from them instead of from multinational chains.

Related Story | Is there a new startup bubble?

“I find in Canada that unless it has to do with hockey we’re okay being number two,” remarked Gary Ziegler, founder of eThor, a Calgary-based maker of online ordering software for restaurants.

But Hunt said the next generation may have a different experience. Starting companies is becoming more accepted, she said, but young people who do it may be surprised to learn how hard it can be.

Ziegler said the entrepreneur community in Canada is disjointed, and creating connections among entrepreneurs could help young people starting their own businesses.

“Entrepreneurs are so focused on doing their own thing that they really don’t care about anyone else,” he said. “We need to change that.”