Provinces that have implemented the enhanced driver’s licence (EDL) and enhanced identification card (EIC) programs to ease cross-border travel are not seeing as much demand for the RFID-enabled cards as anticipated.

Ontario, British Columbia, Quebec and Manitoba have been issuing the technology-embedded identity cards as part of the U.S. Western Hemisphere Travel Initiative requirement that went into effect June 1, 2009.

The security measure requires Canadians to prove their citizenship when traveling into the U.S. and the EDL/EIC is an alternative to a passport as a way to do that.

More than 115,000 RFID-enabled cards have been issued across the four provinces. But that is less than the expected demand, according to ministry contacts. Here is the breakdown of the cards issued or applied for by province:

Manitoba expected that about 100,000 residents living a short distance from the border would be interested in the card after focus group testing conducted in 2008 and 2009, says Brian Smiley, media relations coordinator with Manitoba Public Insurance. But as the economy dipped into a recession, Manitobans had less of an appetite for travel.

“More Manitobans have also been applying for passports, since they made the process a bit easier recently,” he says.

The same sentiments were echoed by Adam Grossman, spokesperson for the Insurance Corporation of B.C.

“It’s less than our original expectation would be,” he says. “The process for getting a passport has become a lot simpler than it used to be.” 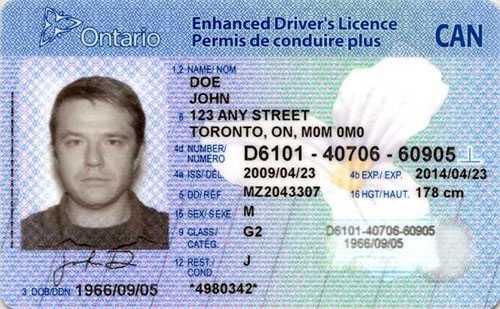 The enhanced cards have been criticized by privacy commissioners for the GEN2 RFID chip, which can be read within a vicinity of several meters by any standard chip reader. Saskatchewan chose to scrap its program, citing privacy concerns and expense.

Ontario Privacy Commissioner Ann Cavoukian has suggested using a passport instead of the EDL for border crossing until the RFID chip is replaced with one that can be turned on and off by the owner.

Currently, the cards are issued with a sheath that shields the RFID signal when it’s not needed.

But at this point, provinces are reporting no plans to change the type of RFID chip used.

“We went with the options available at this point, and the on/off chip is not available” Smiley says. “The only information a pirate could glean from this card is a series of numbers.”

The cards emit a string of characters that correspond to a database accessible by border agents. Without the database, no personal information can be attained from the code alone. But privacy advocates have pointed out the code itself is personally identifiable information.

“An on/off switch is not being considered at this time as the current sleeve is meeting its intended purpose of protecting the information on the card while it is in the sleeve,” says an Ontario Ministry of Transportation spokesperson.

Cavoukian has argued that since the sleeve won’t fit in a wallet, no one will actually use it.

“We’ve worked very closely with the Manitoba ombudsman regarding the RFID chip and the information being gathered,” he says. “He has signed off on it.”

Despite not issuing as many EDLs as B.C. or Quebec, Ontario is the province where the card is most commonly used at the border. Here are the number of uses of an EDL at a crossing in March, according to the Canada Border Services Agency:

To give some context to those numbers, Ontario’s Peace Bridge Authority – a single crossing point – reports almost 240,000 cars and trucks crossing from Canada to the U.S. in March. The numbers also don’t take into account EIC use.

Both B.C. and Manitoba expressed an interest in considering a RFID chip with an on/off switch if one becomes commercially available.

“I’m sure we’d take a look at it if it comes out,” says Grossman from Insurance Corporation of B.C.

The chips would have to be proven reliable before implementation, Smiley says.

EDLs cost between $30 and $40 extra in addition to the regular driver’s licence fee. EIC cards are similarly priced.