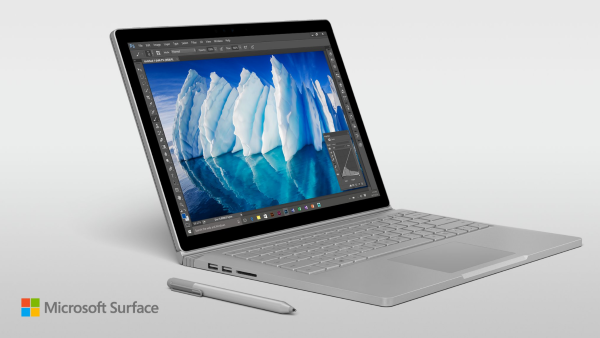 Microsoft did not sacrifice the versatility of the Surface Book i7 with its increased power, as it can still be used in regular laptop mode, clipboard mode, and draw mode. It comes included with a Surface Pen in order to take advantage of its PixelSense Display touch screen, and programs like SolidWorks 3D CAD, AutoCAD Revit, and Adobe Premiere Pro 5.

“[The Surface Book i7] has three times better graphics performance than the Macbook Pro 13-ich,” said Panos Panay, head engineer of all Microsoft devices, at the event. Despite boasting about the Surface Book’s prowess compared to Apple’s Macbook lineup, Microsoft has yet to report any sales figures for the first year of the laptop.

The Surface Book i7 starts at $2,399 and will be available Nov. 10. You can read more about its technical specs here.

With the Surface Studio, Microsoft has finally entered the all-in-one desktop game. The Surface Studio can be powered by an Intel Core i7 processor and a 4 GB NVIDIA GeForce GPU, as well as hold 32 GB of RAM and up to 2 TB of storage. It also contains four USB 3.0 ports, a full-size SD card reader, a mini display port, and a 3.5 mm headphone jack.

Despite all of this power, the Surface Studio is an astonishing 12.5 mm thick, with a 28 inch PixelSense Display touch screen that boasts a 3:2 aspect ratio with a 192 ppi. It comes loaded with Cortana, and users can tilt the Surface Studio to essentially create a giant tablet. The tilt doesn’t go all the way down, but it can reach a 20 degree drafting angle.

Alex Raduhttp://www.computerdealernews.com
is a Video Producer for IT World Canada. When not writing or making videos about the tech industry, you can find him reading, watching TV/movies, or watching the Lakers rebuild with one eye open.
Previous article
Xiaomi reveals new concept smartphone with edgeless display
Next article
Online sales, mobile traffic expected to rise this holiday season: Adobe