It’s going to be another jolly holiday season for Canada’s online retailers, according to the latest holiday shopping predictions by Adobe Systems Inc.

The company’s Digital Insights division expects Canadians to spend around $5.6 billion online between Nov. 1 and Dec. 31 this year, a 12 per cent gain over last year – and nearly half their browsing will be through a mobile device.

However, the signs point to Canadians preferring window shopping on their mobile devices to actually buying products on them, Adobe Digital Insights manager Becky Tasker tells ITBusiness.ca, with mobile devices expected to account for 28 per cent of Canadian holiday sales (18 per cent on smartphones, 10 per cent on tablets).

Moreover, when shoppers do purchase items on their mobile devices they typically costs less than items purchased via desktop or notebook, she says.

“From a business perspective, retailers need to identify what’s causing this behaviour and how can they make up for the monetary gap,” Tasker says. “One recommendation I’ve been giving is to not only focus on mobile optimization – which will improve the experience for everybody – but to also think about cross-device integration: the sort of technology that can allow a customer to jump between their smartphone, tablet, and desktop in an integrated, cohesive way.”

While the bulk of Adobe’s research covers the U.S. market, Tasker says much of the information is relevant for Canadian retailers as well.

For example, as in the U.S., “Black Friday,” which this year will fall on Nov. 25, kicks off Canada’s holiday shopping season and is expected to be the second-most profitable day for online retailers – next to Cyber Monday, when Adobe expects Canadian retailers to pocket more than $200 million in online revenue, three times their usual rate of sales. 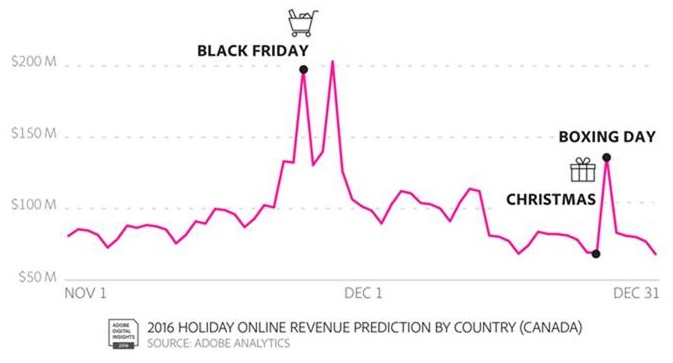 “There isn’t necessarily anything bad about it, it just seems like the growth is getting more isolated and competitive with so many players on the market today,” she says, emphasizing that, more than anything, the reduced growth rate represents an opportunity for retailers to differentiate themselves in other ways, such as by offering a superior customer experience.

“When we asked consumers why they shop online, obviously good deals and free shipping and great bargains were part of it, but we also saw this insurgence of convenience factors,” Tasker says. “Not having to wait in line, or wait in traffic, a greater variety of products or product availability.”

The retailers who best pay attention to these convenience factors and emphasize their skill at meeting them – while continuing to offer competitive prices – will be the ones in the strongest position to attract higher sales and repeat visitors, she says.

“Even though they’re not as big as cost savings, customers are starting to show that they’re willing to pay a bit more of a premium to go online,” Tasker says.

Handful of products driving growth at the top

Another trend the Digital Insights team noticed was that a large percentage of year-over-year growth came towards the end of the holiday season, rather the beginning, with five per cent growth during the first two weeks and 24 per cent growth at the end of December.

There are several tactics retailers can deploy to take advantage of this opportunity, Tasker says, such as discount offers that require consumers to “clip and collect,” or reduced prices for delayed shipping – or, for procrastinators, expedited shipping.

“The level of growth we saw at the end of the holiday season indicates an area of opportunity that’s a little more untapped than the unsaturated earlier part,” she says. “A website or retail company could easily promote last-minute shopping to procrastinators, encouraging them to complete that purchase and finish their holiday shopping.”

Finally, Adobe’s predictions confirm that the holidays exacerbate an unfortunate reality of retail – that a very small percentage of items drive the majority of sales. In the U.S., Adobe found that only one per cent of products drive 74 per cent of online sales during the holidays (versus 63 per cent on average).

Among the products that Adobe expects to drive holiday sales this year, based on social media buzz: Lego sets; Hot Wheels; Nerf products; video game systems including the Playstation 4, XBox One, and Nintendo DS (but not the Wii U); Pokémon Sun and Moon; and toys based on TV shows Paw Patrol, Skylanders, and perennial Disney phenomenon Frozen.

To compile the U.S. version of the report, Adobe’s Digital Insights team measured 80 per cent of all online transactions from the top 100 U.S. retailers on an ongoing basis, ultimately covering 1 trillion visits to more than 4500 retail websites and 55 million stock keeping units (that is, items for sale); analyzed 75 million social mentions between September 2015 and December 2015, and between August 2016 and September 2016; and conducted a companion survey of more than 1,000 U.S. consumers.

Canadian predictions were compiled from 6 billion visits to Canadian retailers.

In the past, Adobe’s predictions have proven to be accurate within two percentage points of actual sales.