It’s just his second day on the job as head of Toronto’s MaRS information technology, communications and entertainment (ICE) sector, and Salim Teja feels like he’s a perfect fit.

“The experience and skills I’ve developed match perfectly the platform MaRS has here in Toronto,” he says in a phone interview. “It has that tissue that connects to entrepreneurs and young and emerging companies.”

Teja describes his experience as having been in seats on both sides of the table. He cut his entrepreneurial teeth as a co-founder for software firm MobShop Inc. soon after graduating from the Richard Ivey School of Business at the University of Western Ontario. From there, he made a jump into the venture capital world as an entrepreneur in residence at Mosaic Partners and later became a partner with Brightspark Ventures. In between those roles, he put in stints at Indigo Books & Music as the vice-president of corporate development and served as the chief operating officer of B5media Inc.

That mix of entrepreneurial experience and hands-on investing could benefit Treja at a place like MaRS. As head of the ICE Sector he’ll be responsible for overseeing the 5,500 square-foot open concept workspace that plays host to growing technology startups such as  Bitstrips, Wave Accounting, and Polar Mobile. He’ll also be partly overseeing the Jolt accelerator program that churns out startups in cohorts of six in six month periods. Then there’s the 60 volunteer mentors that assist MaRS wider community of 370 early-stage ventures.

“It’s an exciting time for MaRS as it embarks on its next phase of growth,” he says. “Where I’d like to focus is really working with entrepreneurs and companies to identify high-impact companies that really create value for our eco-system.”

MaRS is getting set to open its Phase 2 building this Fall. Designed as part laboratory, part office-space, it will double the square-footage available to MaRS clients. So far its tenants include the Ontario Institute for Cancer Research and Public Health Ontario.

MaRS has three categories of clients, according to Teja: entrepreneurs, corporations, and government. Part of its mandate is to provide a platform that balances the needs of those groups. Acting as an innovation hub, MaRS should be the tissue that connects the best entrepreneurs and companies with the right type of clients and opportunities available in the public sector, he says.

“As technology starts to move into areas… like healthcare and these big massive industries, there’s a role for government to help these companies understand the landscape,” Teja says. MaRS will be “helping to direct and create a platform about what kind of research and development is happening across the province and how we can develop that into an innovation opportunity.”

Building relationships with the financial community to support technology-based startups will also be a focus for Teja. A mentor with Extreme Startups and a managing partner with seed stage venture fund Decode Venture, he has a perspective on the venture capital situation in the Toronto-area and across Canada. Teja has also been involved in MaRS’ Investment Accelerator Fund in recent months.

“From a funding standpoint we’re so early on right now in terms of where our industry is going,” he says. “Without the right types of systems and infrastructure in place, w’ere going to have some great ideas, but we’re not going to capitalize on them.”

Partnerships between government and private sector will be an important part of creating that, he says. The number of funds available for entrepreneurs are few and far between and the financial industry should step up to support them. But entrepreneurs must do their part too, he adds.

“Investors are expecting big, strong visions and early data points to demonstrate some viability,” he says. “The bar has really been raised in terms of what it takes to raise venture capital money these days.”

It’s looking to be a busy schedule for Teja at MaRS, starting with day three of the job tomorrow. 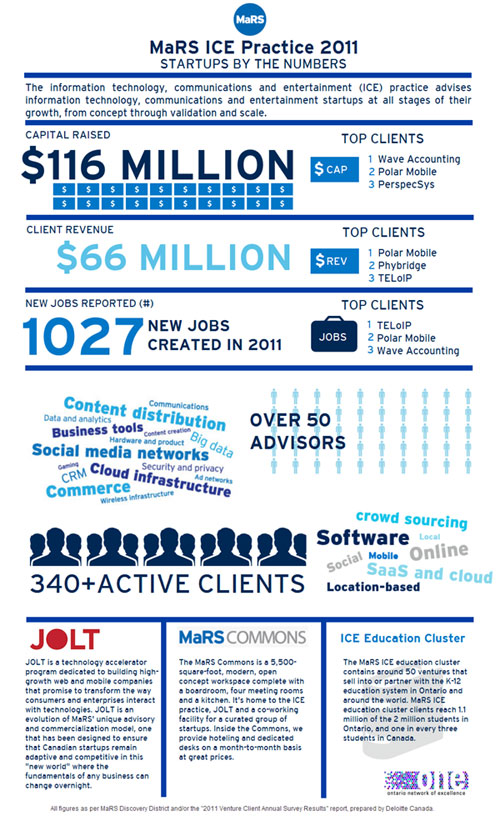 Brian Jacksonhttp://www.itbusiness.ca
Editorial director of IT World Canada. Covering technology as it applies to business users. Multiple COPA award winner and now judge. Paddles a canoe as much as possible.
Previous article
DataAppeal creates everyman tool for 3D geo-spatial data visualizations
Next article
Citrix SaaS offerings designed for SMBs without an IT shop