Toronto startup Scolaris.ca has just launched a beta version of its site that lets students crowdfund to help pay for their college or university education.

Students can use the site to raise tuition money by setting upscholarships for themselves on the site. Then their friends, family oreven generous strangers can donate funds using the site’s PayPalfeature to defray the cost of going to school for thatstudent.Students can also link their scholarship to their Facebook and othersocial media accounts and use it to post updates about their courses,marks, awards, graduation festivities or other school relatedactivities so donors can track their progress in school.

Crowdfunding has been used toraise money for charitable causes throughsites like Kiva or for startup ventures likethe Pebble watch, whichraised a record breaking $10 million on the Kickstarter site.Scolaris.cafounder and CEO Mark Mauleesan got the idea for educationcrowdfunding from his own personal experience of trying to pay his waythrough medical school. 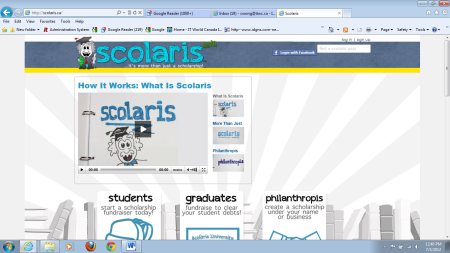 “Medical school wasn’t cheap. I was fortunate enough to have peopleapart from my parents say ‘Here’s a cheque for Mark,’” Mauleesanrecalls. “My parents helped me through medical school and now mysister’s going through law school in Ottawa. So she can raise funds forher scholarship (on Scolaris.ca) in the coming year.”

The premise could gain traction for a few reasons. Some people are morelikely to give money to educate a loved one or friend they actuallyknow than to a venture pioneered by complete strangers involvinguntested technology or business markets. And although Canadian EricMigicovsky raised over $10 million on Kickstarter, theaverage Canadianstudent needs to raise way less – $5,366, according to StatisticsCanada – to pay for one year of tuition. As Mauleesan points out, thatgoal could basically be met if just 50 people gave $100 each.

There’s no cost for students or donors to use the site but Scolaris.cacharges an eight per cent fee on each dollar raised. Four per cent ofthat goes to PayPal for its transaction fee. The other four per centgoes to Scolaris.ca, which is how the startup plans to make money.

As with all crowdfunding sites, the question of security andtransparency also rears its head with Scolaris. What’s to stop astudent from raising money on the site but using it for non-educationalpurposes? And is there a way to make sure a non-student doesn’t set upa fake account on the site just to raise money and run?

Mauleesan says all students registered to crowdfund on Scolaris.ca must provide proof they are enrolled in a post-secondary education institution, such as acceptance letters, a university or college student I.D. number, or a tuition invoice from the school.

“As long as you’re going to an accredited (school) and can prove you’rea student or are going to be a student…(there’s) no way to come toScolaris.ca and try to scam donors to try to rip them off,” Mauleesansays.

In addition, all funds raised on the site go into a lump sum accountadministered by Scolaris.ca rather than directly to the students. Ifstudents want to use some of the money they’ve raised on the site topay for their tuition, they must provide Scolaris.ca with an officialtuition invoice from that school, which Scolaris.ca then pays bytransferring the funds to that institution. Students can never directlyaccess the funds themselves.

“That way the donors know the money went to (the) school and notanywhere else,” Mauleesan says.

What about a student who raises money through Scolaris.ca and thendrops out of school? That’s something the company is still workingthrough during this beta testing stage.

“All universities have their own withdrawal policies (for full orpartial refunds) so we’re still working with our lawyers to make surethat doesn’t happen,” Mauleesan says.
Scolaris.ca has received accreditation from Crowdsourcing.org, anAmerican organization that acts as a de facto regulatory body to policethe growing sector for fraud or other unethical practices. Scolaris.ca won the accreditation after a lengthy questionnaire andaudit of its Web site, team and business plan, Mauleesan says.

“It gives users and donors some level of trust that it’s not just somefly-by-night scam.”

There are other crowdfunding sites targeting the education niche.U.S.-based Takeashine is non-profit and Educationgeneration, also aU.S. non-profit, limits donations to $20 each and only raises money forstudents recommended by certain schools. Another American site,GradeFund, raises scholarship money but funding is based on studentsattaining certain marks.

To really differentiate itself from the field, Scolaris.ca has appliedfor a U.S. provisional patent “covering our specific business model andclaims around it,” Mauleesan says.

And what about Mauleesan’s medical education that put pressure on hisparents’ pocketbook and inspired him to start Scolaris.ca? He’sofficially Dr. Mauleesan, M.D. since graduating from medical school inthe Caribbean nation of Dominica, but is now focused more on being apatient entrepreneur than diagnosingpatients.

Christine Wonghttp://www.itbusiness.ca
Christine Wong has been an on-air reporter for a national daily show on Rogers TV and at High Tech TV, a weekly news magazine on CTV's Ottawa affiliate. She was also an associate producer at Report On Business Television (now called BNN) and CBC's The Hour With George Stroumboulopoulos. As an associate producer at Slice TV, she helped launch two national daily talk shows, The Mom Show and Three Takes. Recently, she was a Staff Writer at ITBusiness.ca and is now a freelance contributor.
Previous articleXConnect: Epilogger talks about incubator experience
Next articleMalware threatens to disrupt Internet for thousands worldwide