Santa Clara. Calif.-based NComputing Inc. announced a new product this week aimed at small and mid-sized businesses that will deliver virtualized Windows applications without the desktop.

Unveiled Feb. 25, oneSpace is described as a unified workspace solution. It allows IT administrators to deliver applications and files as a service to end user devices, including tablets such as Apple’s iPad or Android-based devices. The solution is currently in a private beta with some NComputing customers and will be extended to a public beta in the Spring. The offering is aimed at companies that are depending on legacy Windows applications for business processes, but are seeing employees working more often on tablets as a result of the bring your own device (BYOD) trend.

“We’re not impacting the end user’s native personal space on their BYOD device, but we’re providing that secured sandbox in a workspace to give IT administrators control over that,” says David Burton, vice-president of marketing at NComputing. 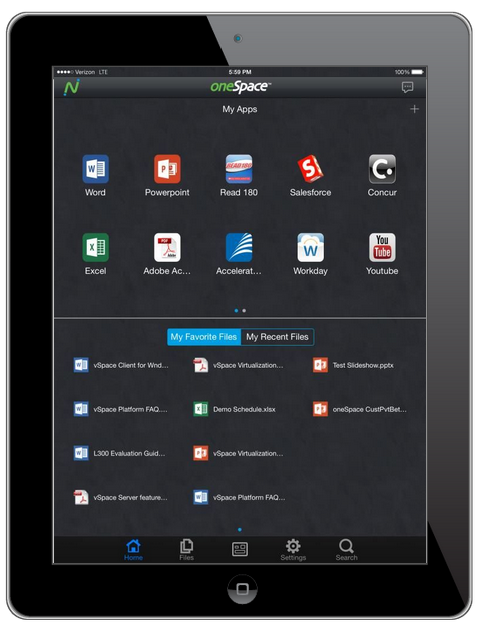 The new offering from NComputing expands on its VSpace solution that delivers virtual desktops and applications to think clients and other PCs. There are other ways to get Windows apps on a tablet, such as Citrix Receiver, but oneSpace allows users to avoid using the Windows desktop, which can be awkward on a touch screen.

“It’s not the best user experience and you’re delivering more than what’s needed for them to be productive,” Burton says. “We’re delivering the applications and the files in one workspace on the tablet.”

oneSpace also connects cloud storage services like Dropbox, Box.net, and Google Drive to the workspace. That way users can access their accounts on these cloud services within the secured sandbox on their personal devices. Any on-premises file shares can also be accessed from the workspace, and users can search for files across all their storage locations. 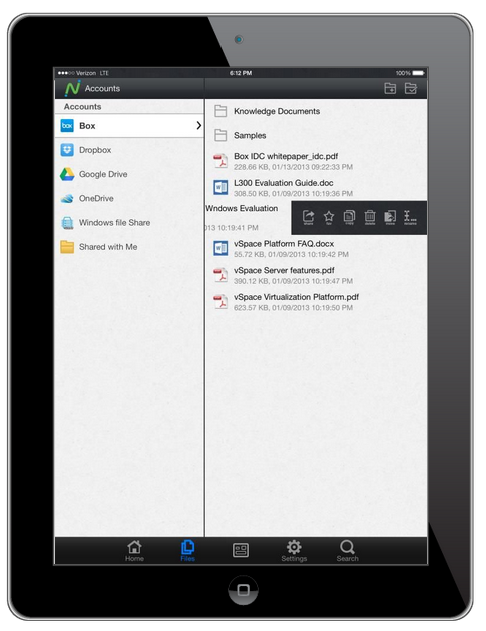 Windows applications run in full screen and can be navigated as you’d expect a native tablet app to work. So pinch to zoom is available, and the swiping and tapping gestures you’d expect.

The backend for oneSpace can either be provided by NComputing in a cloud-delivery model, or hosted on premises by enterprises. So far the product has been beta tested with NComputing clients in the education space, Burton says. That is drawing from a single instance of oneSpace hosted in the cloud offering popular applications like Microsoft Office.

oneSpace will cost US$29 per user per month to access, and that is just to use the Workspace. Users will need to provide licences to use Windows applications, though NComputing will be able to sell access to some popular Windows apps as an add-on. Customers can expect their own custom Windows applications can be supported. 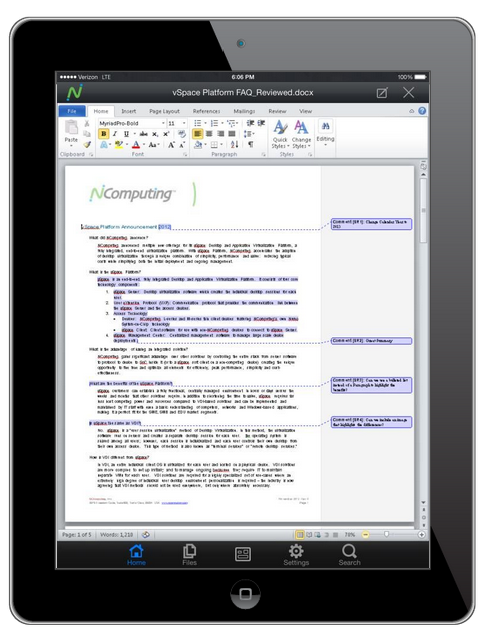 “In a lot of cases, ti’s these custom applications that our customers have been having trouble mobilizing,” he says. “In theory we can support any Windows application out there.”

The solution will be available in North America first, then expand internationally.

Brian Jacksonhttp://www.itbusiness.ca
Editorial director of IT World Canada. Covering technology as it applies to business users. Multiple COPA award winner and now judge. Paddles a canoe as much as possible.
Previous articleHow the cloud can improve security: Courtot
Next articleEllen scores most-retweeted photo ever in Samsung’s Oscars marketing stunt