You could call it dial-a-dealmaker.

Would-be CEOs can get one-on-one advice over the phone from executives,venture capitalists and other successful business stalwarts viaClarity.fm,a startup launched by Moncton-born serial entrepreneur DanMartell.

Though Martell is best known as one of New Brunswick’s brightest youngIT upstarts, Clarity.fm clients can’t get advice using social media,texting, Skype or even e-mail. 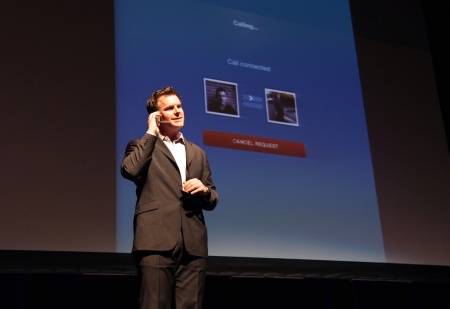 CEO Dan Martell at the Clarity.fmlaunch event in Moncton.

“It’s 100 per cent over the phone,” says Clarity.fm CEO Martell. “I think that e-mail and Skype have actually distanced us quite a bit (from each other). When I look at all the great advice I’ve gotten over the years, 99 per cent of it was over the phone. You don’t have those types of conversations over e-mail or tweets.”

Execs who have signed up to give advice include Hootsuite CEO Ryan Holmes, Rypple CEO Dan Debow (whose firm was recently acquired by Salesforce.com) and top Silicon Valley angel investor Dave McClure. Each expert sets their own rates for how much they charge for advice. An e-commerce feature of Clarity.fm’s Web-based app enables advice seekers to pay for the service with their credit cards. Clarity.fm makes money by taking a 30 per cent cut of each expert’s fee, although many mentors are giving advice for free or donating their fee to charity, Martell says, in which case Clarity.fm waives its commission.

There are already various online entrepreneurial advice sites, including Sprouter, a Toronto startup acquired last fall by Postmedia Network for an undisclosed amount. In fact, Martell is a frequent guest advisor on Sprouter who reckons he’s answered over 1,200 questions on that site to date. So what sets Clarity.fm apart from all the Web-based advice outlets?

“We’re phone based and we’re really making it about conversation. It’s not a content site and there’s no SEO play. It’s totally different,” Martell says.

Clarity.fm facilitates the process of connecting the experts with the advice seekers so no exchange of phone numbers or contact details needs to take place between them.

Martell vouches for the impact a quick phone chat can have on an entrepreneur’s path. Though he’s successfully built companies like Flowtown, a social media marketing startup acquired by Demandforce last October, Martell remembers a time when he was running Spheric Technologies Inc., another social media related firm he launched a few years earlier. Feeling crushed by the weight of day to day responsibility, he wanted to hear a voice of reassurance on the other end of the line himself.

Martell’s moment of crisis
“I was two years into (starting) Spheric Technologies and felt super lost. I had 12 employees, I was 26-years-old and doing over $1 million in revenue but felt like I was going to drive a racecar off a cliff.”

A cold call Martell made to former New Brunswick premier Frank McKenna led to Martell being introduced to what he calls three “amazingentrepreneurs” who got him back on track with some inspirational words.

One of those three was Gerry Pond, an angel investor and chairman of Mariner Partners who is now on Clarity.fm’s expert roster giving advice. About 600 experts have come on board to give advice for the service, and although Martell won’t reveal how many customers have used Clarity.fm so far, he says the volume and dollar value of the calls completed are both “in the thousands.”

Although many experts are sharing their insights for free on the service, some are charging about $300 or $400 per hour for phone sessions. But some customers, including one from the UK, have told Martell it’s worth it for them.

“In one day he spent 300 bucks talking to three of the top guys in his mind and he would’ve never been able to do that. He said it’s the best 300 bucks he’s ever spent.”

Getting access to experts is particularly valuable for entrepreneurs who don’t live near big cities like San Francisco, New York or Toronto, says Martell, who divides his time between Moncton and Silicon Valley.

“Most of us are not born in a geography that supports that, especially in New Brunswick. And if you’ve never (built a business) before, it takes a whole lot of screw ups to learn.”

Since the company’s Web-based application remains in beta mode until the end of January, only potential customers based in New Brunswick can officially access the service through the Clarity.fm site, while those outside that province can get access through the firm’s Facebook page.

For the month of January all advice fees will be donated to charity with the goal of raising a million dollars. Martell won’t reveal the amount raised until the end of January but says “things are looking good.”

Christine Wonghttp://www.itbusiness.ca
Christine Wong has been an on-air reporter for a national daily show on Rogers TV and at High Tech TV, a weekly news magazine on CTV's Ottawa affiliate. She was also an associate producer at Report On Business Television (now called BNN) and CBC's The Hour With George Stroumboulopoulos. As an associate producer at Slice TV, she helped launch two national daily talk shows, The Mom Show and Three Takes. Recently, she was a Staff Writer at ITBusiness.ca and is now a freelance contributor.
Previous article
Intuit hires former Apple executive to lead Canada division
Next article
U.S. anti-piracy bill delayed after stirring controversy