You young people are doing a lot of shopping with your smartphones – but you should be doing more. That’s one of the conclusions drawn from new research by PayPal and Ipsos examining the growth of mobile commerce in Canada.

“We are at the dawn of a mobile-first era,” said Alexander Peh, head of mobile and market development at PayPal Canada, in a statement. “At PayPal, we’ve seen our mobile growth rise from less than one per cent of our payment volume in 2010 to more than 20 per cent in 2014.”

Mobile shopping is becoming more routine for those that have made the jump, with 17 per cent of all shoppers making a smartphone-fueled purchase more than once a week and 10 per cent at least weekly. Yet 30 per cent of millennials made at least a weekly mobile purchase.

For the majority of Canadians that haven’t yet trying mobile shopping, the reasons are familiar. Many just don’t see the advantage – their desktop or laptop browser is just fine, thank-you – while security is also a drawback for many when it comes to completing a transaction with a smartphone or tablet.

As for those that have tried mobile shopping but aren’t regulars, screen size and a preference for the laptop or desktop were the most common factors cited.

So we’re relying on you, millennials.

Here’s an infographic from PayPal covering some data points from the study: 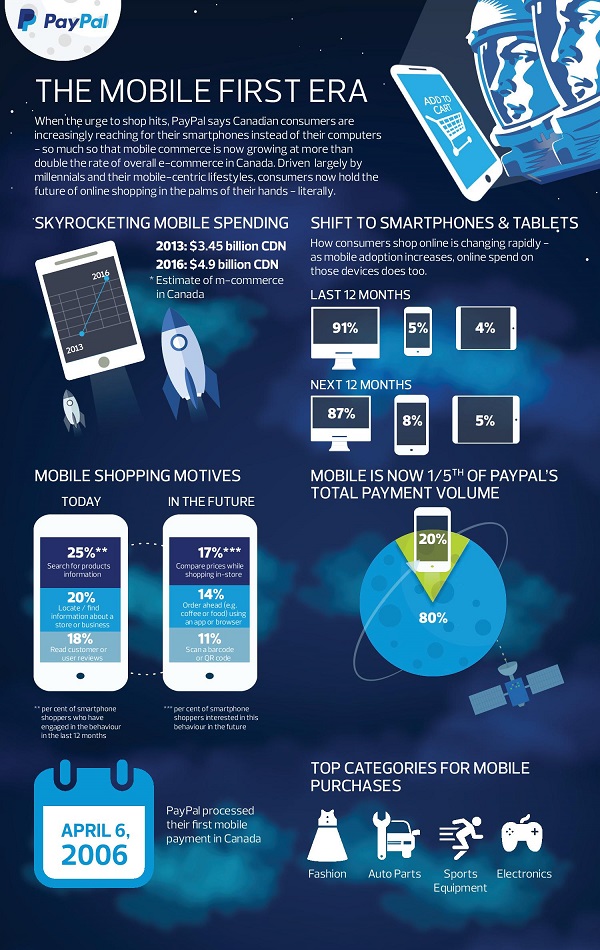 Jeff Jedras
Jeff Jedras is a technology journalist with IT World Canada and a member of the IT Business team. He began his career in technology journalism in the late 1990s, covering the Ottawa technology sector for Silicon Valley North and the Ottawa Business Journal. He later covered the technology scene in Vancouver before joining IT World Canada in Toronto in 2005, covering enterprise IT for ComputerWorld Canada and the channel for Computer Dealer News. His writing has also appeared in the Vancouver Sun & the Ottawa Citizen.
Previous articleHand-me-down smartphones getting a new lease on life
Next articleMeasuring performance still a challenge for digital marketers