Microsoft gets InTune with SMBs

A free beta version, available to 1,000 customers and Microsoft partners, was released Monday. Businesses in Canada, the U.S., Mexico and Puerto Rico will be able to harmonize with Microsoft until May 16. A final release will be sold in one year’s time.

InTune is a tool hosted by the Redmond-based software giant. It offers a simple, Explorer-style interface to manage corporate PCs. It is offered through the Microsoft Online Services platform, says Sandrine Skinner, group product marketing manager at Microsoft.

“This is about comprehensive desktop management solutions we want to provide to smaller businesses,” she says. “They could be at a Starbucks café or at the branch office, Anywhere they are, they can be managed.” 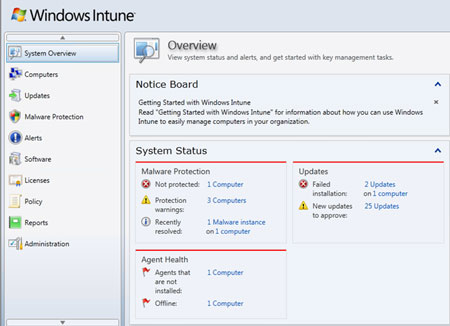 An InTune subscription also includes an upgrade licence to Windows 7 Enterprise on a subscription basis. Businesses currently running any Professional edition of Windows, be it XP or Vista, could install Microsoft’s latest operating system while they are subscribed to the hosted service.

“We think because Windows InTune simplifies your desktop management and offers a basic licencing solution as well, it will entice a lot of customers,” Skinner says.

The Web-tool and operating system combo may win over mid-sized shops struggling to deliver IT support, says Russ Conwath, senior research analyst with Info-Tech Research Group. For those already considering a Windows 7 purchase, this could be a good option.

“It all sits in that Microsoft environment, which is nice if you’re a Microsoft shop anyway,” he says.

Each company using InTune receives a unique identifier to access a list of computers connected to the service. A small piece of client software is installed on each PC that reports information so long as it is connected to the Internet. The management tool allows the administrator to organize computers into hierarchies and groups, organized in a branch-style menu.

“You login to this Web client and you know everything about their hardware setup,” Skinner says. “You can see down to the details of the processor and look at the clock speed they have.”

Administrators also can push updates to the PCs managed through InTune. Remote desktop allows for IT to take over a user’s mouse and keyboard in trouble-shooting situations. Malware protection is built-in, using the same engine as Microsoft Security Essentials.

“It’s the basics of what you’re looking for,” Conwath says. “It’s missing the ability to deploy applications, most competitors would have the ability to do that instead of just patching.”

Microsoft’s Desktop Optimization Package is also included with the subscriptions.

Businesses will have their information secured on Microsoft’s servers using encryption that includes the HTTPS protocol and SSL, Skinner says. Microsoft also takes data privacy seriously, and hires a third party to audit their practices and ensure they’re not exploiting data inappropriately.

“We make sure all of our products comply with high level data privacy standards,” Skinner says. “We don’t take it lightly.”

Many small businesses would likely boost security as a result of patching machines that haven’t been accessible for a while, Conwath adds. The Web-based tool is a good option if the alternative is having a group of unpatched machines, but not if your computers already have secured VPN connections to the office.

Small enterprises just starting up may benefit from trying Microsoft’s free beta offer, he says. “This gives you a lot of capabilities you’d normally have to pay for.”

When the full product is launched in a year, a fair price per user per month would be around $20, Conwath says.

Microsoft hasn’t disclosed the price for the final product.