Lenovo announced a new US$199 (that’s about $194 in Canadian dollars) IdeaPad tablet with a 7-inch screen and Google’s Android OS in response to the surge in demand for inexpensive tablets, the company said on Thursday.

The IdeaPad A1 tablet weighs around 400 grams (0.88 pounds) and is under 0.5 inches (1.27 centimeters) thick, and will become available in specific starting around the end of September, said Nick Reynolds, executive director of global marketing at Lenovo. The tablet provides seven hours of battery life.

The tablet will be among the cheapest 7-inch Android tablets available from a top device maker. Many competitive products cost more than $250. Acer last month started shipping its 7-inch Iconia Tab A100 tablet for US$329, and Samsung’s 7-inch Galaxy Tab screen sells for $279 through Amazon.com and Fry’s Electronics.

“This is a very accessible price point starting at US$199,” Reynolds said. Lenovo views the tablet as a companion to PCs, and a low price will open up demand for tablets, especially in emerging markets, Reynolds said. 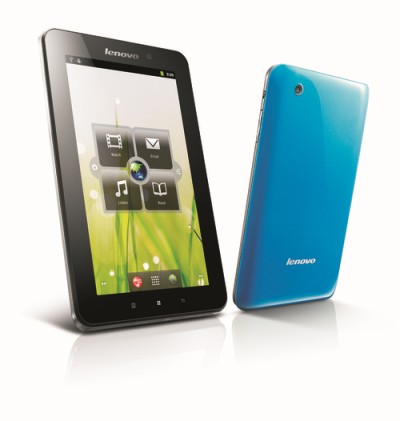 Lenovo’s new tablet comes as prices for Android tablets drop in an effort to challenge the market dominance of Apple’s iPad 2, whose rock-steady $499 starting price has not changed since its launch earlier this year. One of the first Android tablets, Samsung’s 7-inch Galaxy Tab, went on sale late last year through Verizon starting at $600 without a contract, and was considered overpriced. But Android tablet prices have fallen. Unbranded tablets sell for as little as $100. Consumers last month scrambled to buy Hewlett-Packard’s TouchPad tablet, which was priced starting at $99 in a fire sale after the company announced it would stop selling webOS devices. Buyers’ frenzy over the TouchPads was such that HP on Tuesday said it would make a final round of the devices and have them ready for sale in coming weeks.

Android tablet prices are falling because the supplier base is large while the demand is little, said David Daoud, research director at IDC. But at $199, Lenovo may be willing to forgo profits in lieu of building consumer awareness around its tablets, Daoud said. That is a challenge other Android tablet makers have failed at with Apple holding a firm grip on the market.

“The price point could put Lenovo in a very competitive position,” Daoud said.

But Lenovo needs more help beyond a low price to succeed in the tablet market, Daoud said. Apple’s iPad success comes from a cohesive set of hardware, software and services, and Lenovo has to provide reasons beyond just hardware for people to buy its tablets, Daoud said. Lenovo earlier this year launched three tablets, including the ThinkPad Tablet, for consumers and enterprises.

The A1 tablet runs on Android 2.3, which is code-named Gingerbread and used in smartphones. Lenovo’s Reynolds declined to comment on whether the tablet would be upgraded to Android 3.x, code-named Honeycomb, which has an interface designed specially for tablets. Lenovo’s focus is on the next version of Android, code-named Ice Cream Sandwich, and more details around its plans for the OS will be shared in the first or second quarter next year, Reynolds said.

Beyond the OS, the A1 tablet has hardware found in smartphones. The device runs on a chip equipped with a single-core Cortex-A8 processor design from ARM, which is old compared to the latest dual-core Cortex-A9 processor found in many new smartphones and tablets.

Other features include up to 32GB of storage and MicroSD and micro USB slots for expandable storage. The tablet has two cameras: one in the front and one in the back.

The tablet has a customized user interface and users can access applications through Lenovo’s App Shop and the Android Market. The UI can be customized for quick access to specific applications. Lenovo is pre-loading an application called Social Touch, which provides a unified interface for e-mail and social network feeds. An offline GPS application allows users to navigate through maps without being connected to the Internet.

Tablet shipments continue to decline, but there are bright spots