The team behind the Toronto startup Ladies Learning Code (LLC) is doing that this week byholding two programming workshops in Vancouver, the first expansion ofthe smash hit courses outside of Toronto.

LLC’s first Vancouver workshops – both introductory level courses onHTML and CSS – will take place Aug. 24 and 25 from 10 a.m. to 5 p.m. atLaunch Academy and are sponsored by Simon Fraser University. PearlChen, who was the instructor for the first LLC workshop ever held backin Aug. 6, 2011 in Toronto, will take on the same duties at theinaugural Vancouver courses this week. 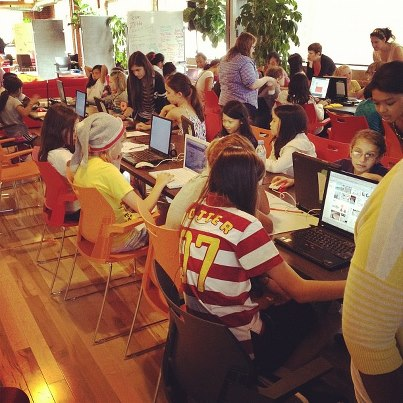 The same team behind LadiesLearning Code, Girls Learning Code (above) and Hacker You is launchingworkshops in Vancouver.

It’s no surprise that LLC is expanding beyond its Toronto base, sincethe response to its workshops for women in its hometown has beenphenomenal. As we reported previously, the LLC workshops sold out likehotcakes among women looking to learn hands-on tech skills in a relaxedenvironment with a small 4:1 instructor-to-participant ratio at thebargain price of just $40 to $50 per class.

“We’re excited to announce that we will finally be offering workshopsoutside of Toronto,” LLC co-founder Heather Payne wrote on thecompany’s blog. “Since starting up, we’ve received dozens of emailsfrom people asking us to bring Ladies Learning Code to their city oroffering to do the work to start it up themselves. As fun and excitingas it sounded, we always felt it was too soon. At least, until now.”

This June, the high demand for LLC classes in Toronto led its foundersto launch Hacker You, a for-profit company offering multi-week coursesin the city with larger class sizes at around $3,000 each. Catering toan entirely different market, the courses would arm their graduateswith a portfolio of completed projects and the experience of a demo dayupon completion. This spring LLC held a Girls Learning Code March Breakcamp for girls aged nine to 13 followed by two summer camps in July andAugust.

Christine Wonghttp://www.itbusiness.ca
Christine Wong has been an on-air reporter for a national daily show on Rogers TV and at High Tech TV, a weekly news magazine on CTV's Ottawa affiliate. She was also an associate producer at Report On Business Television (now called BNN) and CBC's The Hour With George Stroumboulopoulos. As an associate producer at Slice TV, she helped launch two national daily talk shows, The Mom Show and Three Takes. Recently, she was a Staff Writer at ITBusiness.ca and is now a freelance contributor.
Previous articleMcAfee’s Android app updated after more than 1 million downloads
Next articleThe Next 36 gets it right with peer networking focus