It’s official: Toronto is one of the world’s best tech cities

2016 apparently proved to the world that Toronto is a premium destination for technology, with a second report this year listing the Canadian metropolis in the top 10 of tech cities worldwide.

Similar to a report by an Australian firm that placed Toronto 8th in its annual index of best digital innovative cities, U.K. firm Savills World Research has ranked the city at number six on its “Tech Cities 2017: The cities at the forefront of global tech” report.

Out of 22 cities, Toronto was the only Canadian city to make the list. The top five, in order, were Austin, Texas; San Francisco; New York; London; and Amsterdam. 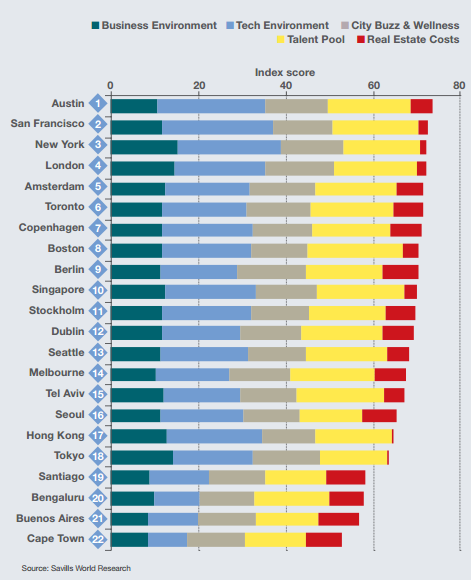 While Toronto doesn’t rank at the top of any categories, its consistency across all five push it ahead of cities that may do well in one category while dropping in the others. The city does best in buzz and wellness, mostly due to its café culture. Savills took into account how easy it is to get a “decent brew and free WiFi for on the go work and networking.” The average cup of joe in Toronto is $2.48, compared to the $3.23 in other ranked cities.

Out of the 22 cities ranked, this is where Toronto fell in each category:

You can check out the full Savills Tech Cities report here.