How this software for boards of directors can prevent insider leaks

It was the middle of election season when James Detenbeck, the chair of the board for Canadian Niagara Power Inc., saw firsthand the damaging effects that leaked documents can have when an insider tried to use the confidential information for political gain.

“It curries favour with the public to show an asset to the community and how it can be sold for that politician’s means,” Detenbeck says. “They tend to take that detail and use it to show negativity in financial explanations that may or may not exist.”

Because the board of directors business was being done with paper, there was no way to definitively prove how the information was leaked. So rather than try and pursue an investigation that may lead nowhere, Detenbeck decided he wanted a technology solution that would give the board better control over their documents and prevent future leaks.

His search took him to Leading Boards, a software firm co-headquartered in Toronto and Montreal. The firm offers a document portal that’s specifically designed to handle all the paperwork associated with the business of a board of directors. 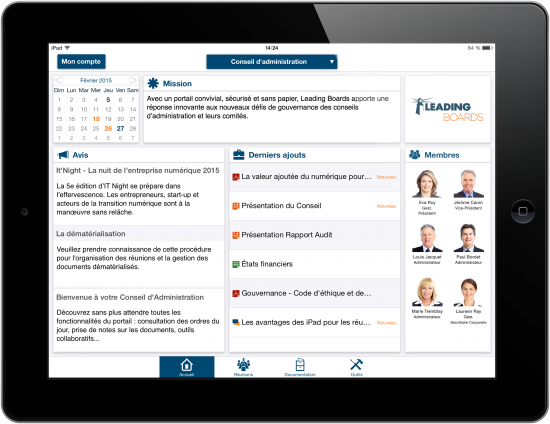 Formed in 2008, the firm now has 100 clients and 5,000 total users, says Joey Roy, a senior account manager at Leading Boards. The software is designed with simplicity in mind.

“We wanted a full paper experience without having to have the paper,” he says. “We wanted to have the board of directors adopt it and use it. Most of the time, the training is about 15 minutes.”

Leading Boards isn’t a catch-all document synching service like DropBox or Google Drive. It’s specifically tailored for documents pertaining to a board of directors – the agenda, notes made during a meeting, annual reports. Features include the ability to search through documents by keyword, annotate on top of documents with notes that can be personal to the user or shared with a group, and the ability to access files while online or offline.

More importantly for Detenbeck, the software puts access controls and tracking in place. Administrators can see who opened which document and when, and what actions they took with it – like printing for example.

“We can actually suppress the print function, so we can actually eliminate the ability for them to make a paper copy,” Detenbeck says. “We’ve left it active for now, but the threat that controls can be put in place are there.”

Related
The secret ingredients that make a successful board of directors

Anyone considering leaking inside information would be deterred because documents would be watermarked with their name across each page, he adds.

Leading Boards has other benefits for an organization beyond security of sensitive information, as Susan Kallsen, corporate secretary at Canadian Manufacturers and Exporters discovered. In her work managing a 35-member board for one of the largest trade organizations in the country, she was tiring of the paperwork it involved.

“It’s about gathering all the materials and then photocopying your brains out,” she says. “Then you’re trying to send it all out a week in advance so they can review it.”

“It saves me days leading up to the board meeting,” she says. And her members seem to like it as well. About half use the web app, while half use the iPad app to access it. 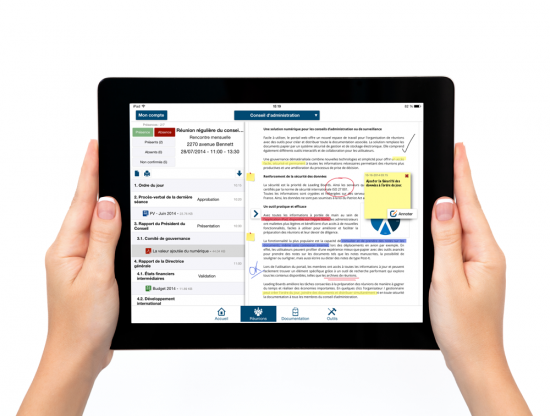 Leading Boards is a cloud service, with the servers located somewhere in Canada, Roy says, though he doesn’t know exactly where for the purposes of security. Leading Boards is also expanding into Europe, with a Paris-based office and a server located in Europe for those clients.

As businesses become ever-more reliant on technology and news headlines are full of catastrophic data leaks for major brands, boards of directors need to take on more responsibility for managing risk around privacy and security, says Wendy Cukier, vice-president of research and innovation at Ryerson University.

“The damage to reputation is often difficult to quantify, yet it’s often the biggest risk,” she says. “Do you have expertise on the board to deal with these issues? I’ve never seen anyone with a skills matrix that specifically defines privacy and security.”

For Detenbeck at Niagara Power, he now appreciates the fallout around an information leak. He also appreciates that he has locks on the sensitive documents he wants to protect.

“Locks are there to keep honest people honest. This is the proverbial lock for our documents,” he says.

Brian Jacksonhttp://www.itbusiness.ca
Editorial director of IT World Canada. Covering technology as it applies to business users. Multiple COPA award winner and now judge. Paddles a canoe as much as possible.
Previous articleRemember AOL? They’ve launched a programmatic marketing platform
Next articleHere’s why Flash is the ‘old gremlin in the closet’ for web video