A project that seeks to combine digital holography with haptic feedback – meaning you could actually feel interactions with the holograms – has received funding from the federal government alongside 11 other projects affiliated with OCAD University.

The description of the technology sounds like a prototype for Star Trek’s Holodeck – a space where space travelers on the Sci-fi show can recreate any setting, object or person and interact with them as though they are real. Toronto’s OCAD will provide the visual technology, auto-stereoscopic that project 3D images without requiring the viewer to wear glasses, and Waterloo, Ont.-based Entact Robotics will provide the haptic feedback technology.

“The kind of holography we’re working with is technology most people haven’t seen yet,” says Michael Page, assistant professor in OCAD’s faculty of art and the academic partner on the project. “It’s a hologram that you can feel.” 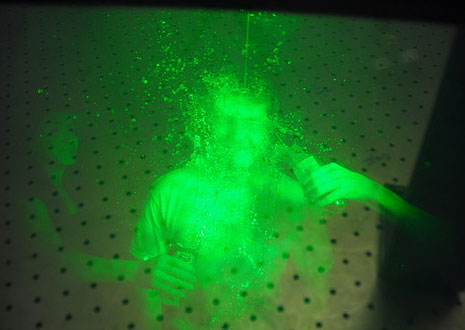 An example of work done in OCAD’s holography lab. Courtesy of Lisamorgan via Flickr.

The futuristic-sounding collaboration will receive about $70,000, according to Page. That’s part of an overall fund of $359,800 going to 12 different research projects at OCAD. The money comes from the Federal Economic Development Agency for Southern Ontario’s Applied Research and Commercialization Initiative.

MP Paul Calandra (Oak Ridges-Markham) was on hand to endorse the metaphorical cheque. The money comes from a larger $15 million fund that aims to help create partnerships between small and medium-sized businesses with colleges and universities.

Hopefully, this will help some businesses recover from 2008’s economic crash, Calandra says. “It will provide companies the ability to experiment with products and achieve better cost effectiveness.”

The funding will be used to help researchers determine how consumers make purchasing decisions and what sort of data visualization might help them make a more sustainable choice, says Peter Rose, a member of OCAD’s board of governors. “It will be able to empower shoppers to vote with their dollar in a convenient and successful manner.”

The end result will be a product such as a smartphone app that visually communicates data about sustainability factors relating to various off-the-shelf goods.

The haptic holography project will seek to eventually build a prototype product, Page says. Then it will move on to commercialization. The focus will first be on creating simulation tools for medical students.

“The model we presented in our visualization is a guy holding a scalpel, making an incision in this torso, this holographic projection,” he says. “The digital hologram is animated in a way that would allow us to show blood emerging from the incision.”

A medical student could practice realistic surgery by looking through layered displays that allow computer graphics to be placed on top of a hologram. Software provided by a Swedish company would be able to map a hologram with tangibility information, so cutting through flesh and bone would feel appropriately different.

OCAD’s holography lab was been active for 30 years and has received funding from various government institutions and research organizations in the past. It also works with commercial partners Impact Robotics, which supplies the haptic devices required.

That means this new funding can be used to hire students to help conduct the research, Page says.