The current Hockey Night in Canada broadcaster has also tasted defeat when victory was not only expected but demanded by a hockey-mad country. And, it was in those unsuccessful moments where Campbell-Pascall learned consistent leadership she told the audience at the Dell Canada Channel Partner Summit.

Campbell-Pascall is the only athlete in history to captain a team to two straight Olympic Gold medals. Not even the great Soviet Union teams of the seventies and eighties managed to do it; thanks in part to the 1980 U.S. Miracle on Ice.

Intersperse with those two Olympic Gold medal triumphs were six World Hockey Championships and a bitter defeat against the Americans in the 1998 Olympic Gold medal final. From those experiences Campbell-Pascall has developed seven strategies for consistent leadership.

In her first Olympic games the Brampton, Ont.-native lost a close hard-fought battle against the Americans 3 to 2. There were many questions coming out of that contest including Hockey Canada’s decision to cut Angela James, who many considered the best female hockey player in the world at the time. James would later become the first woman inducted into the Hockey Hall of Fame. Campbell said just two years earlier the men’s team lost the World Cup to the U.S. and in the 1998 Nagano Olympics a Wayne Gretzky led team came in a disappointing 4th place.

Campbell said the country had the Open Ice Summit to find out what was wrong with hockey in Canada. “I did not want to come home with Silver. I let down my entire country,” she said.

But the day after the loss to the Americans, Campbell got a strong dose of perspective. She went the morning after to get drug tested. “Not the best experience in life since you have to do it in front of a stranger,” she said. The despondent Campbell ran into another silver medalist in Susan Auch. Auch, a two-time silver medalist in speed skating told Campbell to not get herself down because there are so many people in the world who could only wish to even be in the Olympics let alone win a silver medal for their country.

Auch’s words gave Campbell perspective and she raced back to tell the team what Auch said and also to let them know they were the first ever silver medaling Women’s hockey team in history.

Another challenge came at the 2005 World Hockey Championships, where Campbell got the distinction of becoming the first captain to lose in this tournament for Canada. The team lost a heartbreaking final in a shootout. At that time there was a lot of media covering this tournament because the NHL was locked out. “It was the only hockey available and we lost,” she said.

A dejected Campbell was photographed shortly after the loss and that image made several front pages across Canada. She used that “bad photo” as motivation in her training for the next Olympic games which would be her last event of her career.

After winning the Gold medal at the Torino Winter Games she replaced that bad photo with a new one where she was wearing a gold medal. 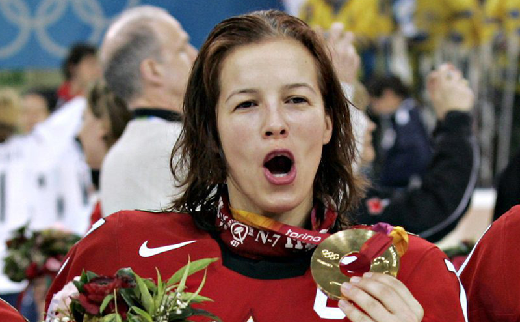 During the Torino games long time Canadian forward Nancy Drolet was cut days before the tournament was about to start in favour of Cherry Piper. Campbell described the moment as pure chaos. As the captain of the team she decided to let the entire team vent.

She believes that her, along with the rest of the team, did not take any responsibilities for the losses. More importantly the team was not taking accountability for their actions (poor play).  Campbell suggests the time to take responsibility is when no one is looking.

Campbell admitted to a group of IT solution providers that she is technically challenged. “I’ve never had an office job,” she said. While she tried to learn how to work with ever-changing technology it reminded her of an Olympic year where Team Canada went through a tough losing streak against its arch-rival the USA. And, when the team starts losing it pushes the players to the brink and everyone gets emotionally drained, she said.

In an attempt to bring the team together, Hockey Canada officials brought the players to a training facility where Canadian soldiers in full packs and helmets weighing more than 100 LBs completed an obstacle course during a particularly hot day.

“Then it was our turn!” The players looked at each other and thought ‘how can we do this?’ Not one player was able to complete the course. But to her surprise, Campbell said three teammates refused to even try. Those players did not make the team, she added.

“You got to come out of your comfort zone,” Campbell said.

A few years after this moment Campbell got the challenge of a lifetime. She was working as a broadcaster for the CBC on Hockey Night in Canada. It was her second day on the job and the producer called her to let her know legendary colour-man Harry Neale had left the arena suddenly to go home.

The producer asked her to take over the colour-commentary duties for the game that evening alongside another legend play-by-play man Bob Cole.

Campbell first thought this was a rookie joke, but soon realized this was for real. She took a two-minute break to call her husband Brad Pascall. She did not want to embarrass herself. Her husband then told her this was the same story she heard before about how girls can’t play hockey.

During one moment in the game she noticed the players positioning themselves for a potential two-on-one down low play while they had the man-advantage. She decided in that split second before the puck was dropped to say this position might result in a quick goal. And, that’s what exactly happened. An impressed Cole told the hockey audience that night Campbell called a goal before it happened.

Since that historic night Campbell has called 30 other games. Her advice: “Never close a door!”

Meeting deadlines and making money is all about performance, Campbell said. “It helps if you are passionate because then you can have fun doing it,” she said.

The more you work with the same people especially outside the work environment the more you learn to trust them. By doing this you get to make real connections with people. During her time on Team Canada not all the players were best friends, but they all had one goal in mind; and that was to win Gold.

Campbell has worked with sports psychologist Peter Jensen on this very topic. Some of the best advice he has given her was: “You all want the corner office. You all want the sexy job. And, you always want to score goals, but not everyone can do that so you need to make others feel they are making a contribution,” she said.

One example of this is the fifth defense player on the team. This player, she says, never participates on the power play. Becky Kellar was this player and what she would do, Campbell said, was create T-Shirts with fun nicknames and the player’s number on the back. The players would put these T-Shirts on day-after-day because they felt appreciated.

“It’s hard work!” Campbell recalled a time when Team Canada out-scored its opponents 46 to 2 leading up to the Olympics. The attitude on the squad when they saw their opponent that night was ‘they think they are going to come in here and win?’

She said, Hockey Canada prepared the team well and enabled them to understand that every nation playing Canada is going to give them their best game so you have to be ready.

Campbell introduced the Dell Canada Channel Partner Summit audience to the concept of Eagles vs. Ducks. “Every idea is a good idea; even bad one’s because they could lead to a good idea,” she said. But using effective communications lessens the stress on incorporating new ideas.

Here are the rules of Eagles vs. Ducks:

Marketing and digital teamwork a winning combination for MLSE