Given tech’s reputation as an employee-friendly industry, we’ll admit to being surprised that only one entry on Indeed.com’s list of Canada’s top 25 employers was a bona fide tech company.

The lesson to glean from this observation is not that tech’s employee-friendly reputation is a false one, Indeed Canada managing director Jodi Kasten tells ITBusiness.ca, but that best practices cross industries – including tech.

“I think employers know, regardless of the role you’re recruiting for, that you have to be competitive, because top talent really does their research on the work environment,” she says. “Every industry has employees asking, ‘where do I want to work and why would I want to work there?’ And while sometimes you can negotiate salaries, I think it’s the work environment and culture that’s really become an important tool for employers looking to attract, and also retain, top talent.”

Spanning more than 10 industries, the full list also includes such tech-driven and tech-adjacent firms as Telus Communications, PricewaterhouseCoopers (PwC), and all five of Canada’s leading banks. 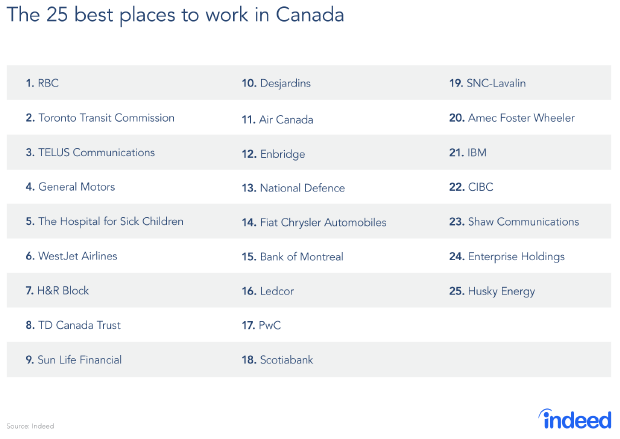 To compile the list, revealed on Tuesday, Indeed’s researchers first limited the companies considered to those with at least 50 current or former employee reviews – a statistically relevant number that guaranteed a mix of positive and negative feedback – then ranked them based on their average scores in five categories: Pay and benefits, work/life balance, advancement opportunities, management, and culture.

“It’s not that tech companies aren’t great employers – they absolutely are – it’s just the methodology that we had landed us the 25 companies that we have on the list,” Kasten says. “It’s not a commentary on the tech industry overall.”

What pushed IBM ahead of the pack

IBM’s employees were especially complimentary of the company’s management and work culture, Kasten says, both of which have been optimized to place employee happiness first.

“What IBM did well, not unlike the rest in the top 25… is that highly engaged and happy employees are productive employees,” she says. “Basically, IBM’s employees felt they had top-calibre management that put people first.”

More than one employee also described a work environment that encourages teamwork – a leading goal for many winning companies, Kasten says.

“One employee said in a review that the CEO would often walk the halls and knew everybody by name, and that was really meaningful for them,” she says. “It was such a simple thing for the CEO to do, yet it had such an outsized impact on helping the employees feel like they belong, to the point where they want to come into work every day.”

Kasten also believes its important that companies and their managers build an environment that encourages honest feedback.

“As leaders in Canadian business, we need to be able to figure out what we’re doing well and how can we do more of it, but also be open to mediocre or negative feedback so we can figure out how to improve our employees’ experience,” she says, noting that while pay and benefits undeniably play a role in employee satisfaction, office environment and workplace relationships are frequently just as important.

Eric Emin Wood
Former editor of ITBusiness.ca turned consultant with public relations firm Porter Novelli. When not writing for the tech industry enjoys photography, movies, travelling, the Oxford comma, and will talk your ear off about animation if you give him an opening.
Previous articleWhich industries are attracting and repelling millennials?
Next articleHashtag Trending: Aug. 2 – Car2Go perks, and iOS 11 breaks stuff