Ever since Google launched its Pixel brand in 2016, it has been laser-focused on competing in the premium end. In the past three years, it has expanded its Pixel brand to include the Pixel Book, Pixel Slate, and of course, the Pixel phones — all at eye-watering price tags at launch.

The Pixel 3a series, on the other hand, seems to contradict Google’s focused market. It’s Google’s first midrange phone series since the last Google Nexus in 2016, and the first time Google has had four total devices in its phone lineup.

It can be hard to distinguish the two without physically touching them, but a closer look reveals a few subtle differences. Aside from adopting a unibody polycarbonate shell, the Pixel 3a XL also has more rounded corners and is a smidge larger than the already massive Pixel 3 XL. 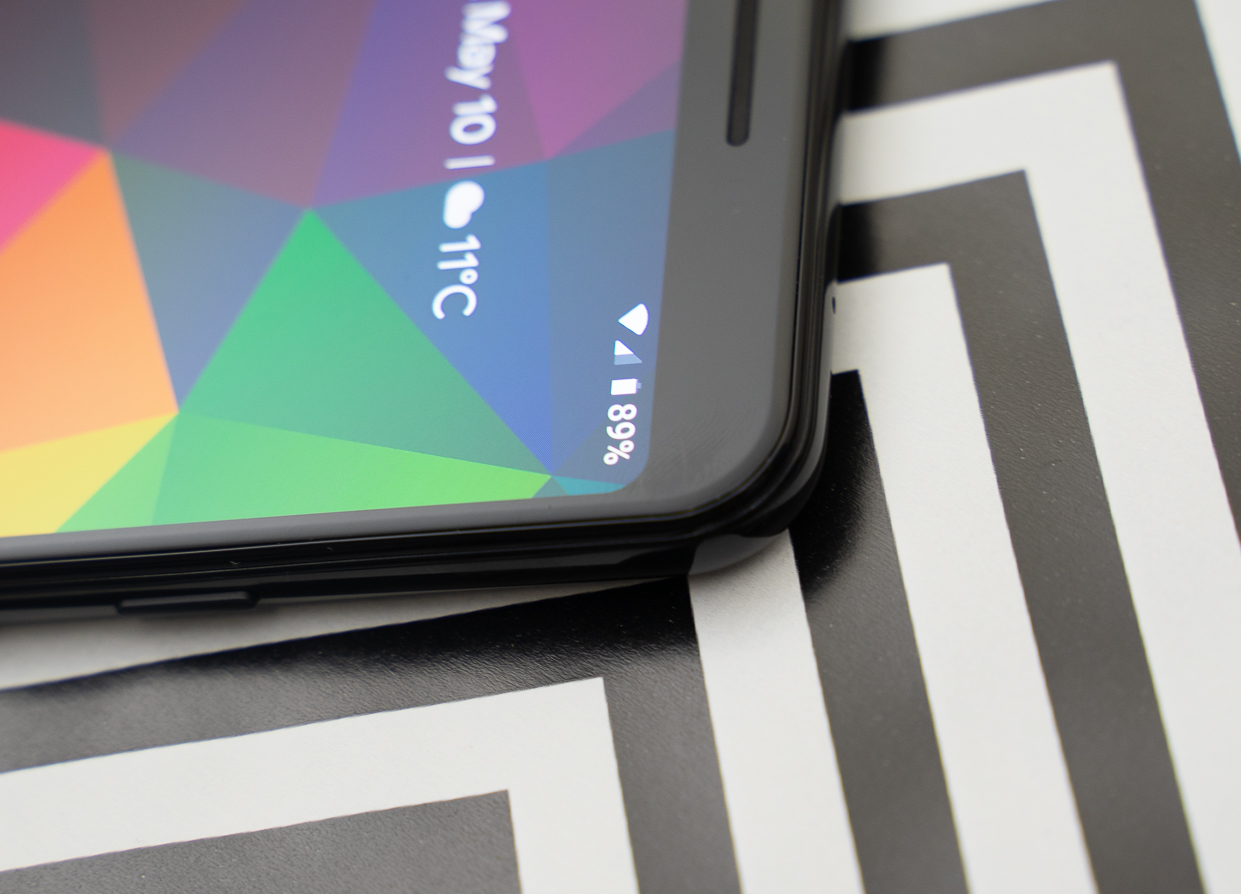 Unfortunately, the Pixel 3a XL has been stripped of an IP water and dust ingress protection rating, leaving us to guess as to how water resistant it truly is.

Google applied a frosted matte grip on the Pixel 3a XL to keep its aesthetics consistent across the Pixel brand. The grip has raised concern amongst Pixel 3 users as they questioned its longevity, fearing that it would get worn out over time. 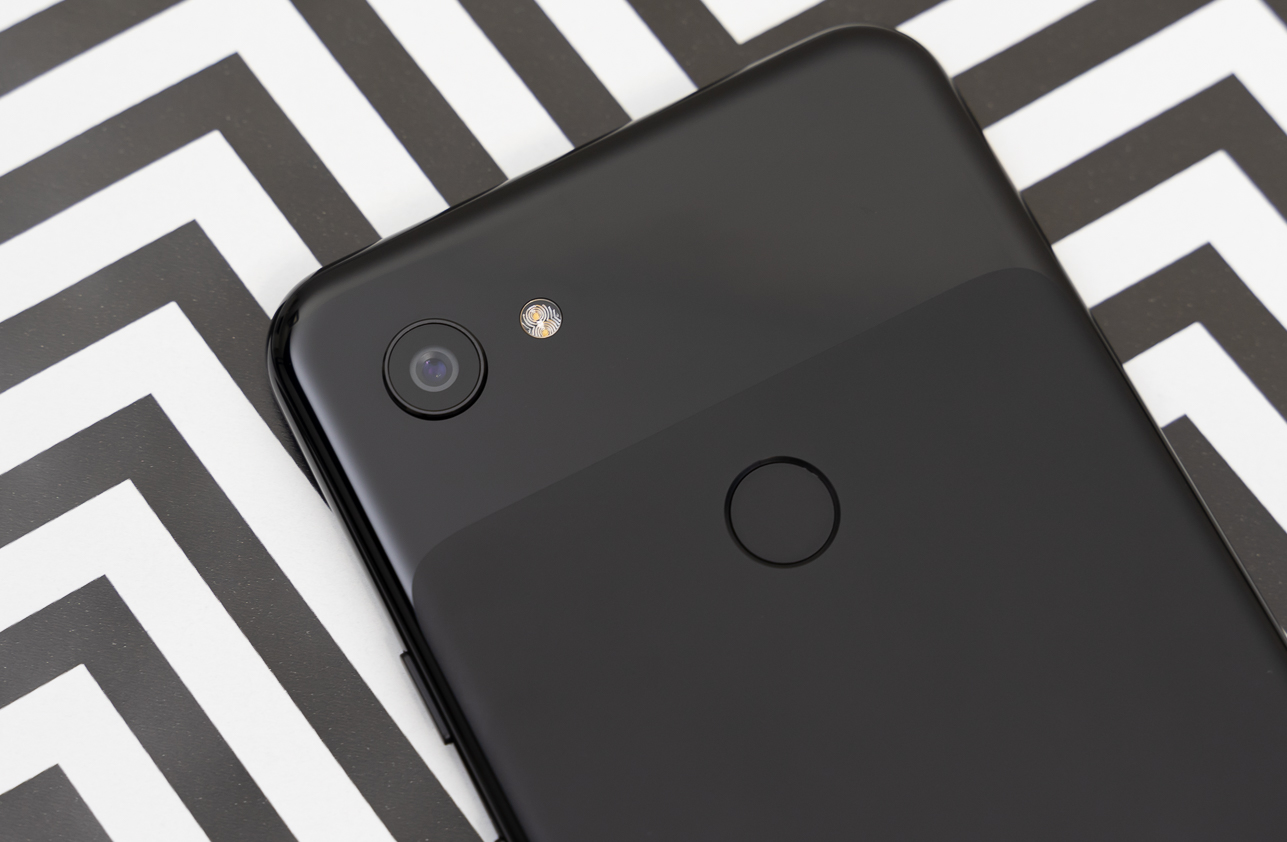 A discrete fingerprint sensor makes its return to the back of the Pixel 3a XL. I personally don’t see this as a flaw; it’s plenty fast and doesn’t deduct from anything.

A thick top bezel stretches across the phone’s width to house the front camera and the earpiece. Because there’s now just one camera instead of two, I wonder why Google couldn’t narrow the top bezel more. Maybe to reserve room for the front speaker? 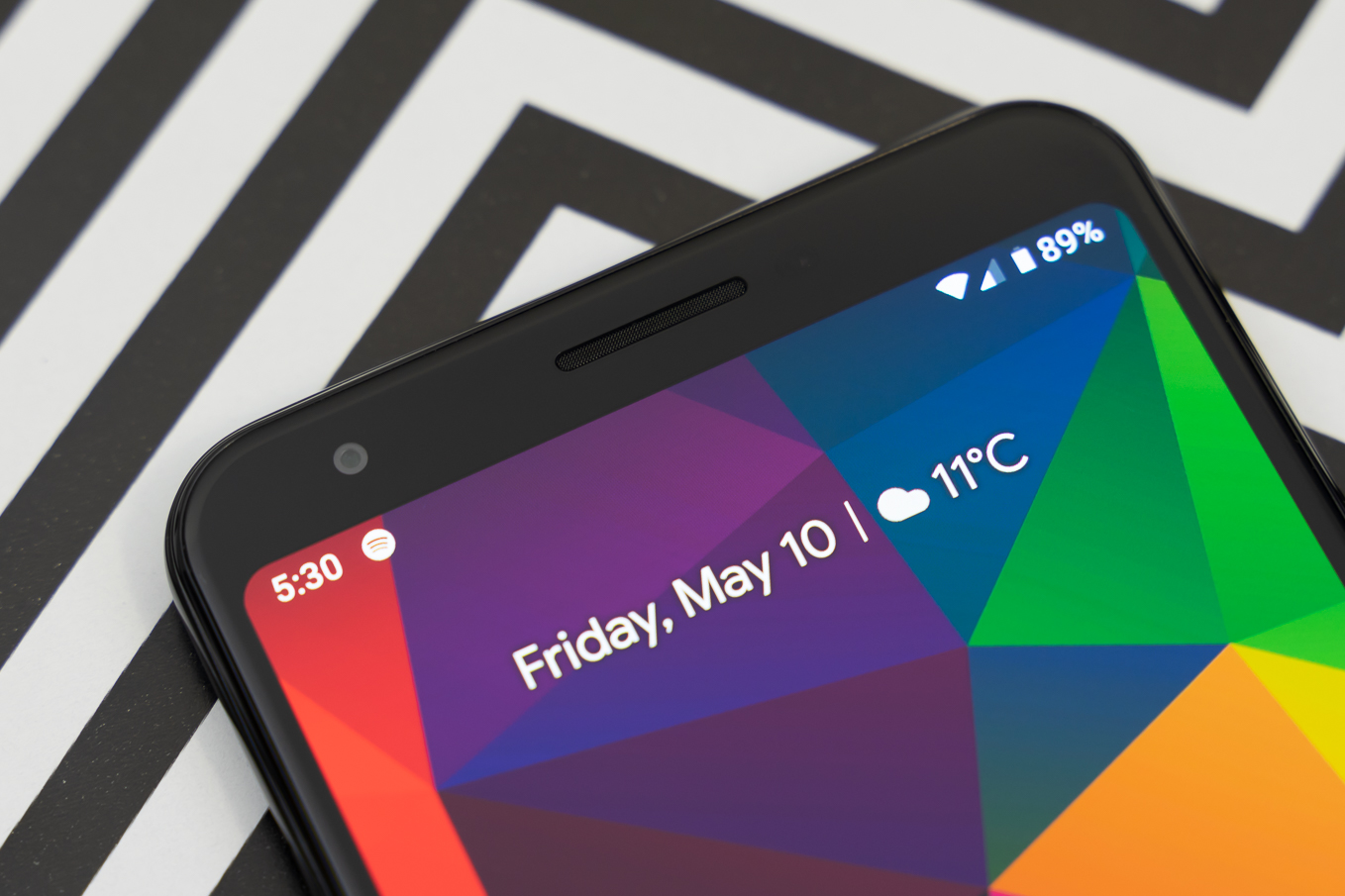 The bottom speakers now point downwards instead of towards the front — a perplexing design revision considering that its chin is thicker than the original Pixel 3 XL. While they’re still punchy, stereo sound and max volume are just a bit lacking. 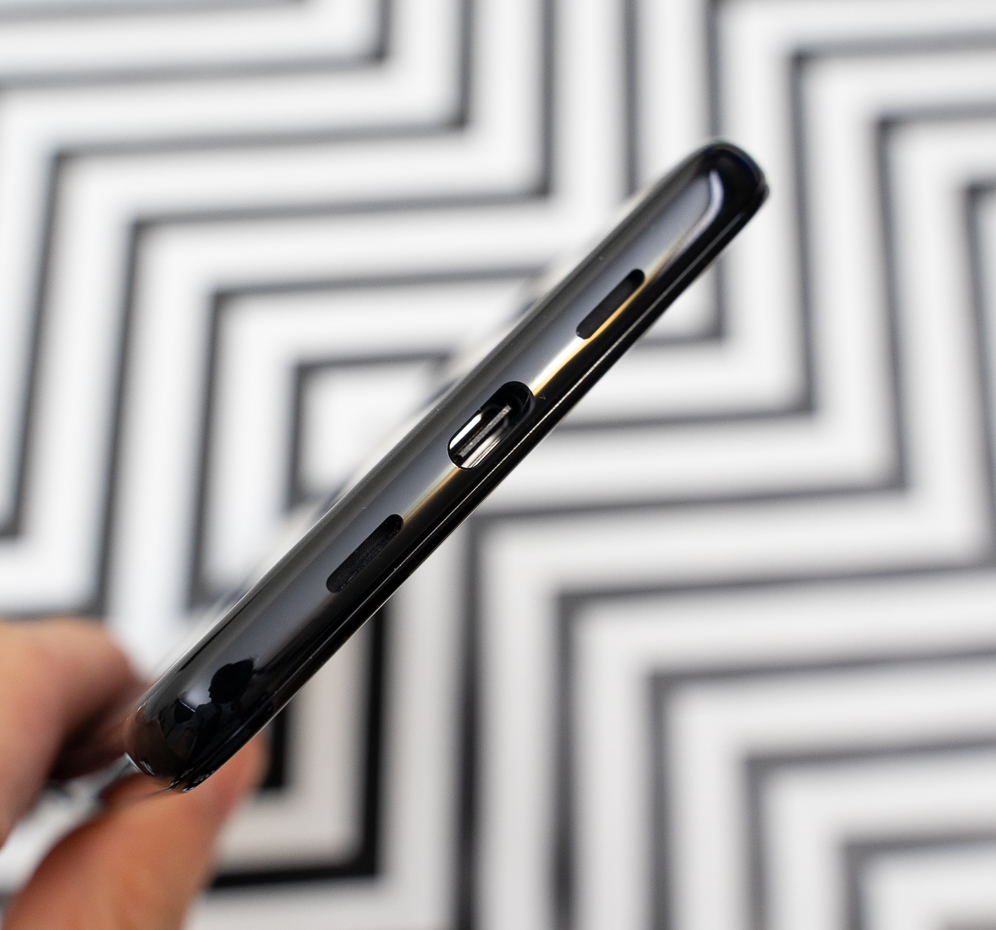 Audio quality, however, has improved by leagues. While my Pixel 3 XL sounded fine, many others complained of buzzing at low levels and an odd vibration when pumping bass. I can confidently say that the Google Pixel 3a XL sounds distinctively cleaner without the weird vibration.

The Pixel 3a XL’s key feature is its camera, and it remains largely unchanged from the more premium Pixel 3 XL save a tiny sensor between the camera sensor and the flash on the Pixel 3 XL.

Sandwiched between the top and bottom bezels is a 6” 2,160 x 1,080p OLED display covered in Asashi’s Dragontrail Glass, the Japanese competitor to Corning’s Gorilla Glass. Although my assumption is that they’re cheaper, the price difference doesn’t translate into a noticeable quality disparity; they’re similarly smooth, providing equal tactility as I glide my finger across them.

Google clearly understands that most users in this price range would likely have wired headphones. Otherwise, it wouldn’t have included a headphone jack. Honestly, it would be a great addition to flagship phones as well. 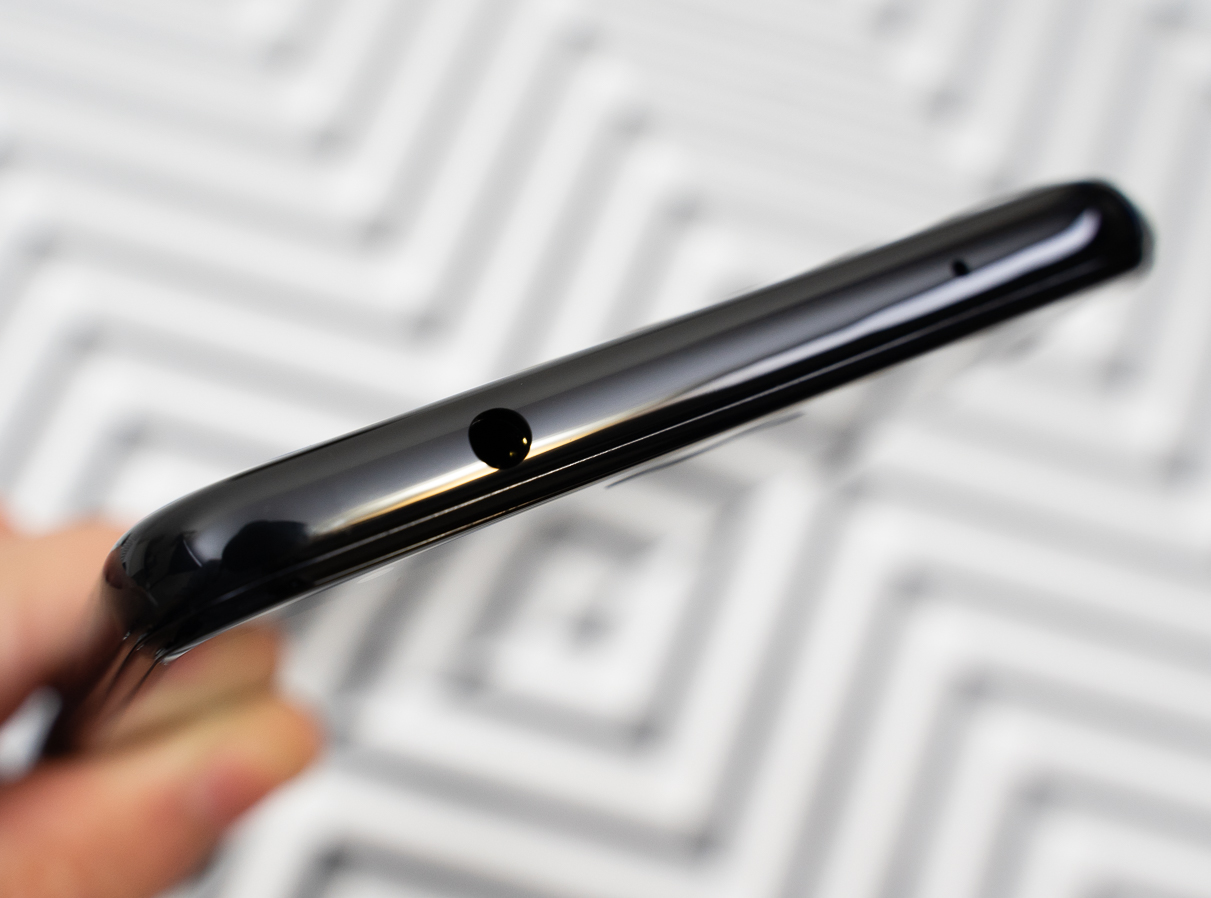 All buttons are congregated to the right. Button selections are simple, consisting of only a volume rocker and a power button. 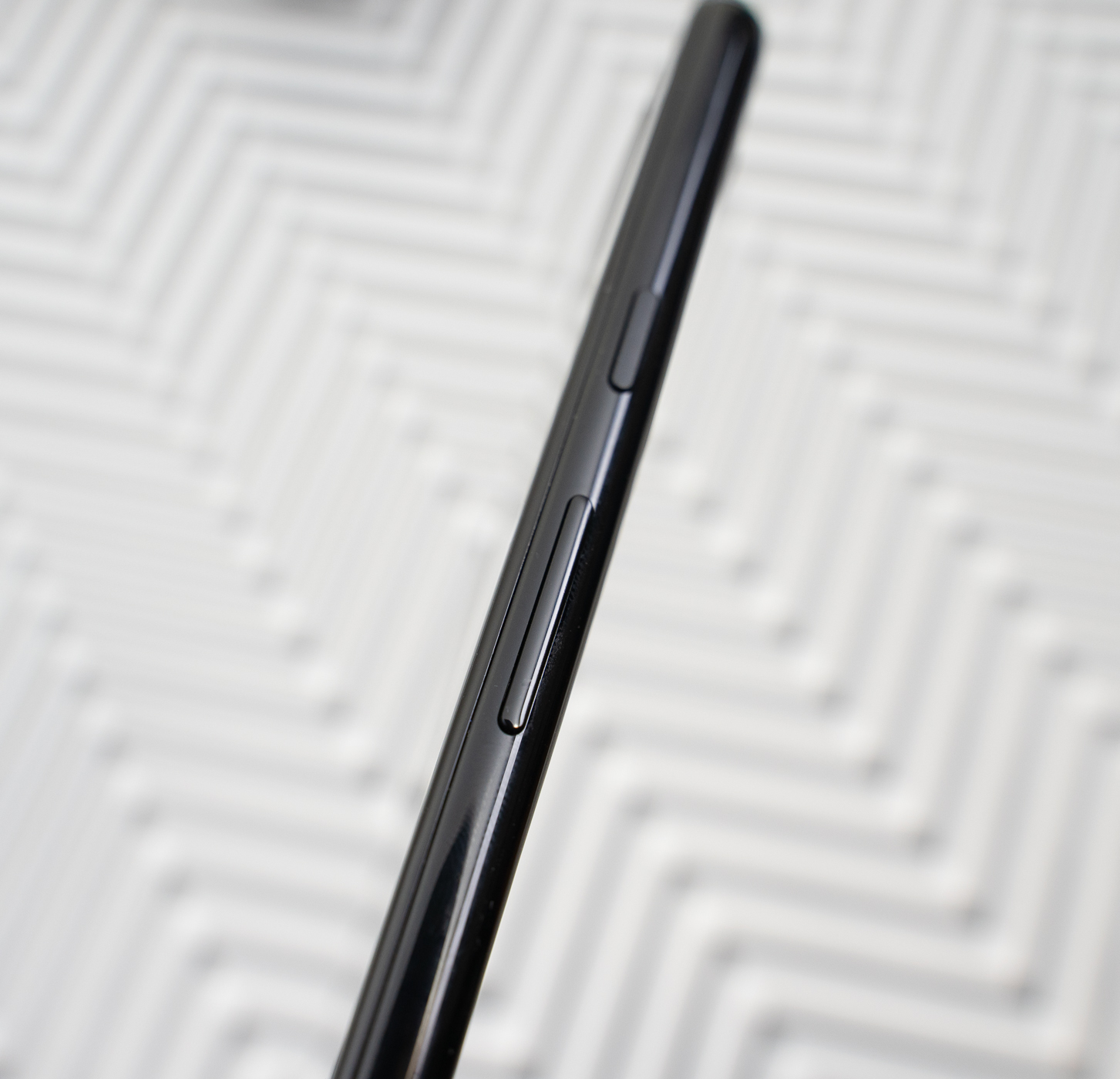 A 2,160 x 1,080p resolution distributed across 6” of OLED display amounts to 401 ppi. There is a sharpness difference between it and higher-resolution displays — if you press your nose against them. At a distance where the phone’s actually useable, though, its pixel count is more than dense enough to offer a satisfying viewing experience. 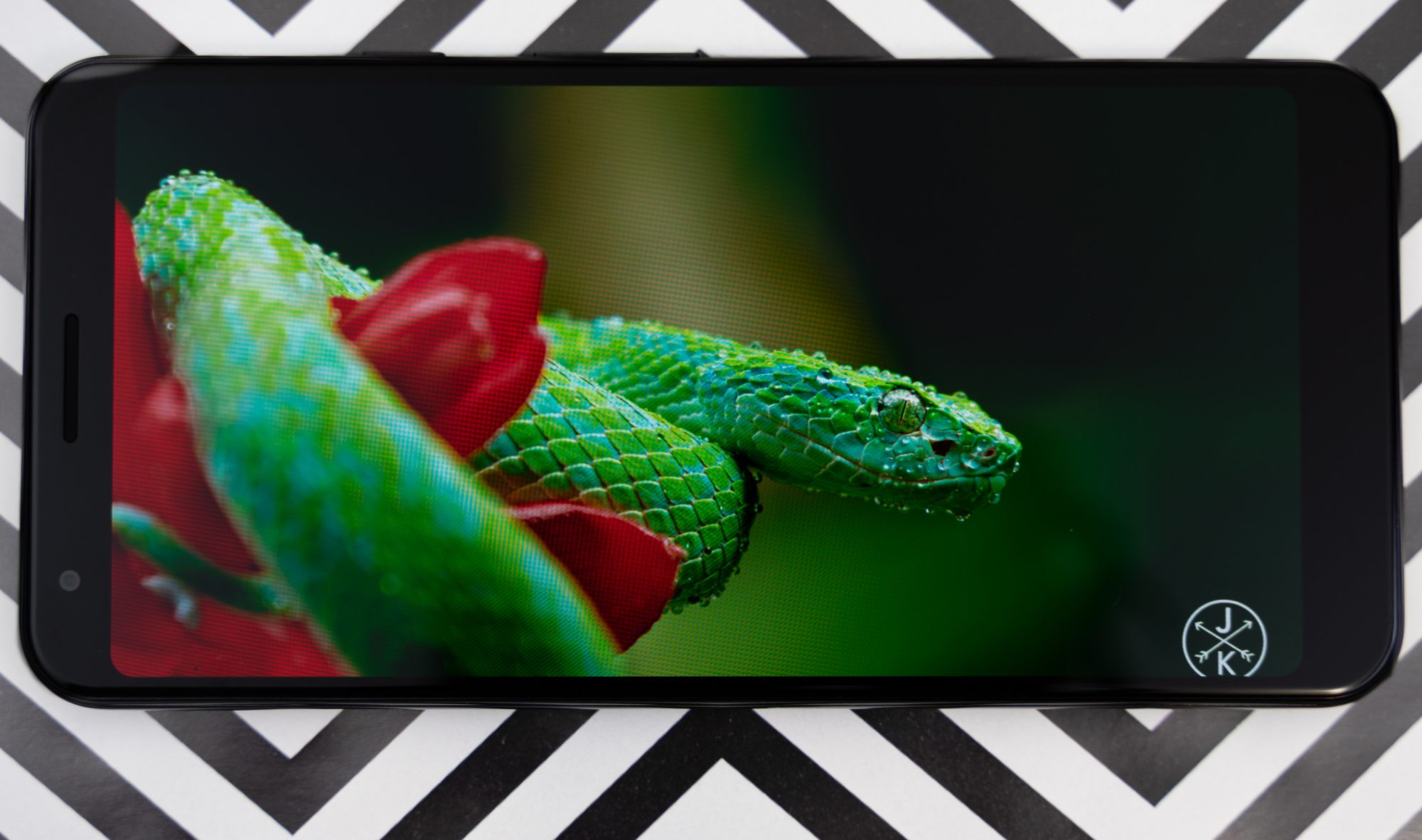 OLED displays rarely have problems with black levels. Brightness, then, has become the foremost factor in determining contrast. Although it doesn’t seem to match brighter displays like the one on the LG G8 ThinQ, It’s still plenty bright for outdoor use.

Colour characteristics are similar to last year’s panel. At its default colour setting, the Google Pixel 3a XL’s display is a touch cooler than the original Pixel. If that doesn’t suit your fancy, you can adjust the saturation by selecting Natural, Boosted, and Adaptive colour profiles. I left mine on Adaptive as I enjoy the lively colours.

We can’t end the display talk without mentioning that it now kills the notch at the cost of a smaller display. The display area has shrunk to just 6” from 6.3” on the Pixel 3 XL.

The Pixel 3a XL is powered by Qualcomm’s Snapdragon 670 chipset. It was released in August 2018 to supersede the Snapdragon 660, Qualcomm’s previous midrange champion.

Despite being marked as an incremental update, the Snapdragon 670 touts some major changes. Its two performances Kryo 360 Gold cores are based on ARM’s Cortex A-75 CPU — the same ones used for the performance cores in the more powerful Snapdragon 845, Qualcomm’s previous flagship mobile chipset. The performance cores are aided by six efficiency cores based on ARM’s Cortex A-55 CPU. Qualcomm also adopted 10nm LPP FinFETs in 2018, which accounts for the majority of its power saving improvements. In addition, its graphics subsystem has been bumped from the Adreno 610 GPU to the Adreno 615. Details on these two GPUs are scarce, however.

Supplementing the processor are 4GB of RAM and 64GB of storage, fairly standard for phones in this price range. 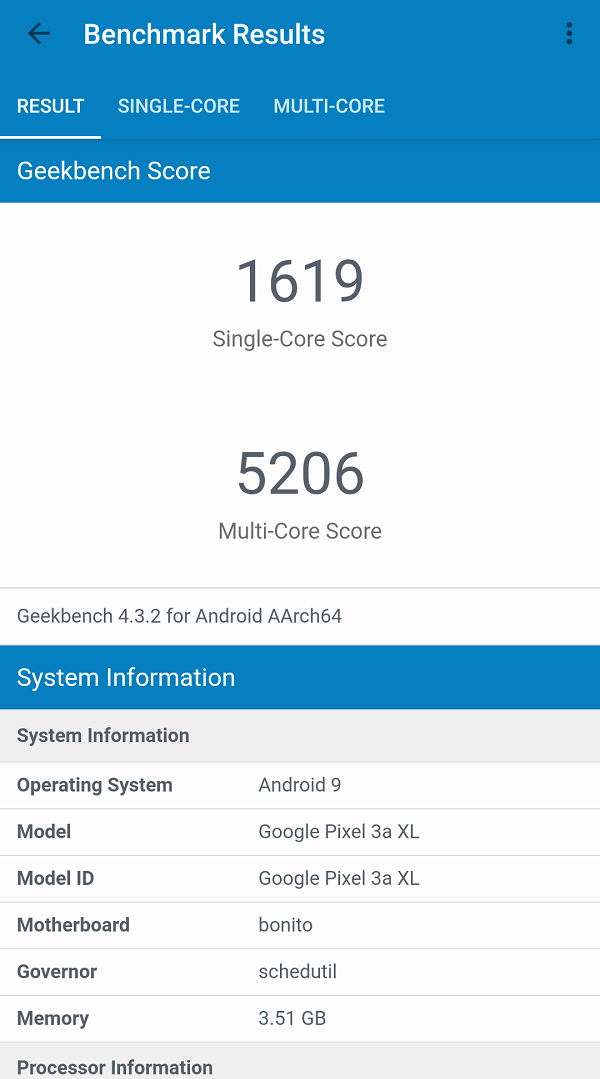 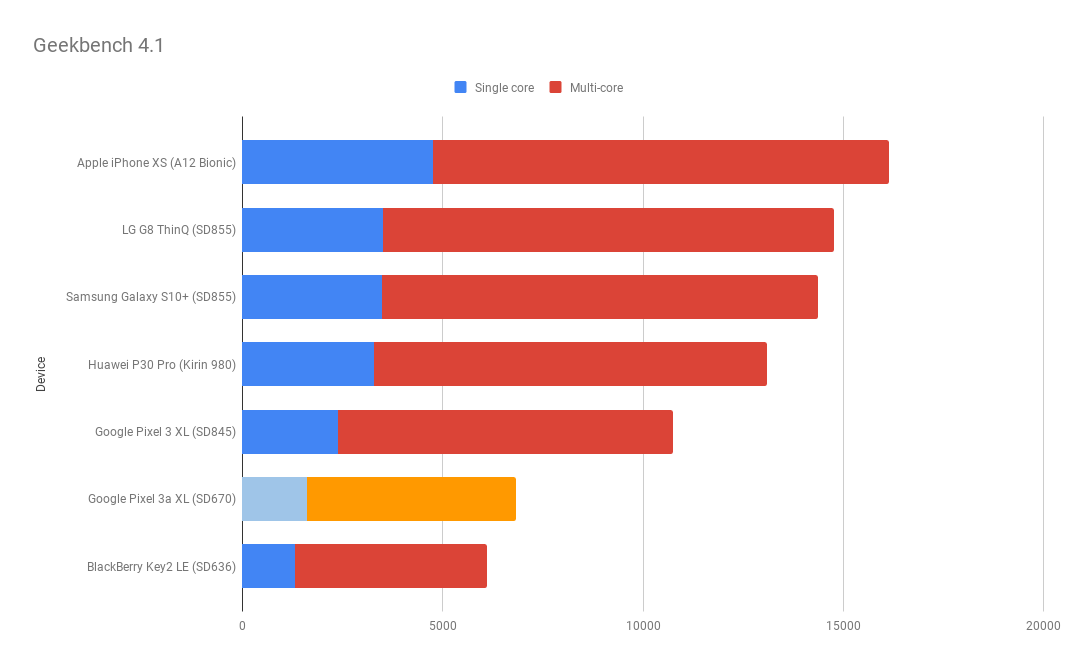 There are no surprises here; the Adreno 615 graphics processor gets easily trounced by flagship chipsets. 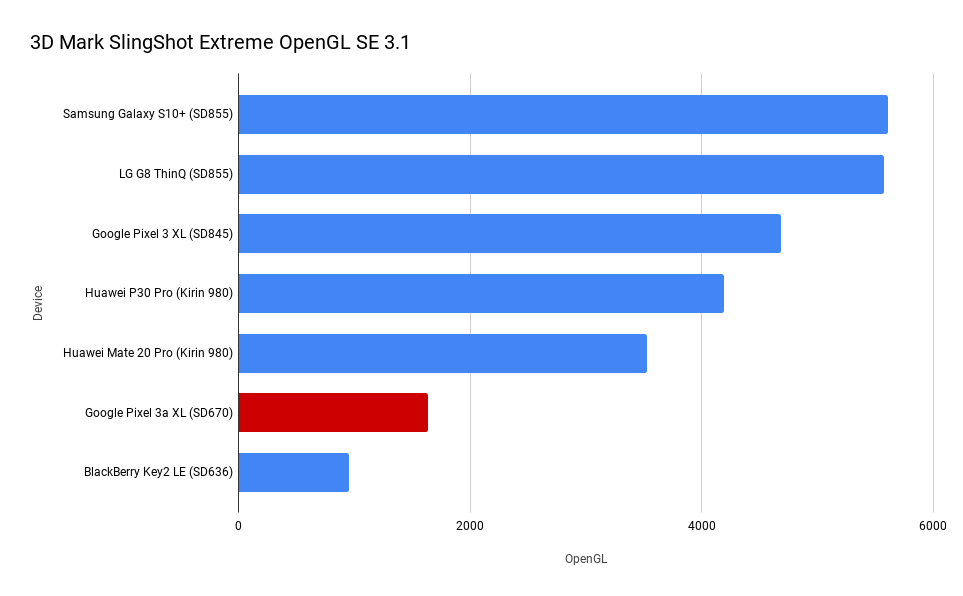 Regardless of stark differences in subsystem-specific benchmarks, the overall system performance is way closer than I’d expected. The Pixel 3a XL actually scored within four per cent of Huawei’s Mate 20 Pro in PC Mark Work 2.0. 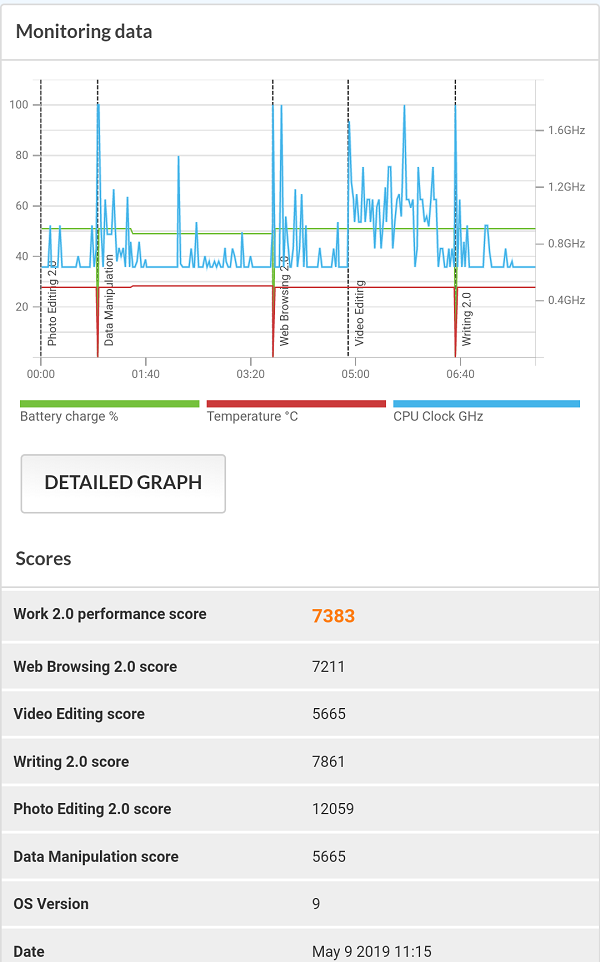 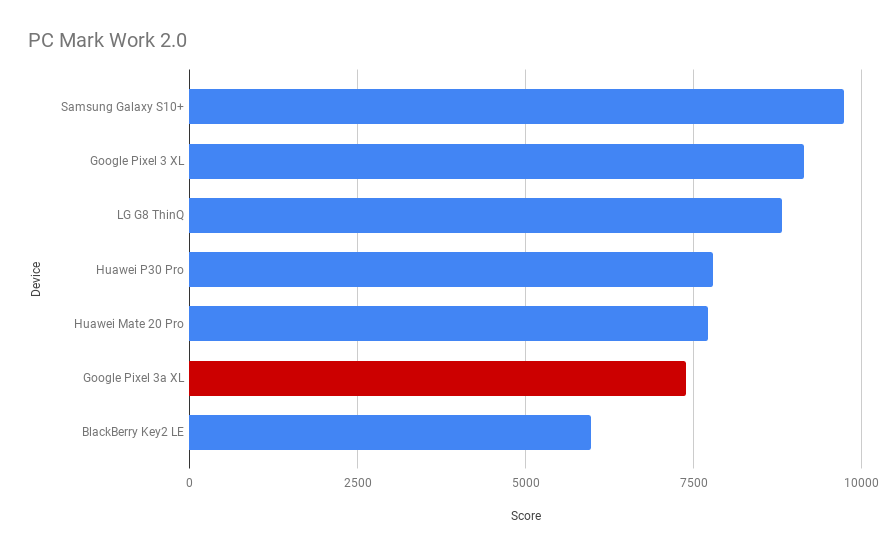 Don’t let a midrange chipset discourage you; the Pixel 3a XL is still competent at handling daily multitasking and all of today’s popular apps. Although its graphics performance seems to be its limiting factor, it still delivers solid frame rates in heavy games like Players Unknown Battlegrounds. AR apps, including Google AR directions and Pokemon Go AR camera, run well, too.

With a single 12MP rear camera, the Pixel 3a XL sports the same camera dichotomy as the Google Pixel 3 XL. That’s in no way a bad thing; as we’ve previously seen, the Pixel’s camera system is fantastic. Most of its success is driven by its Pixel Engine image processor, which enables features like Night Sight and Super Res Zoom.

Without a second ultra-wide sensor, it’s a little more difficult to fit in a large group of people in a shot. Nonetheless, its quality is good enough for video calling and pretty selfies.

When it comes to smartphone OS, less is more. Third party manufacturers tend to embellish Android with nifty features and enhancements. While they’re definitely cool and useful under specific circumstances, they can greatly impede performance. If you’re looking for speed and efficiency, then stock Android reigns supreme.

Google phones have always rocked stock Android. Omitting all the bloat alleviates processing burden on the chipset, saving battery and allocates more resources to run the more essential tasks. Stock Android’s fantastic experience is attributed by its speedy animations, which amplifies the perceived speed of the phone to pricepoints beyond the sum of its parts.

Google Pixel phones also have one of the longest software support cycles in the Android market. All Pixel phones are slated to be supported for three years from their launch date. This means guaranteed update to the latest version of Android and security updates the moment they drop. Google further hardened the Pixel 3a’s security by adding its Titan M enterprise-grade security chip in the phone.

As bare-bones as it may be, stock Android still packs all the features most users would need. With that said, my chief complaint is the lack of a system-wide dark mode, which will eventually land with the release of Android Q. In the meantime, users who want to reduce eyestrains and conserve OLED display’s battery use will have to continue to wait.

You can still quickly summon Google Assistant by giving the phone a good squeeze. Is it cool? Yes. Is it more convenient than shouting “Okay Google”? That’s debatable, especially considering you’ll be orating your commands anyway.

With a power-sipping processor and the largest ever battery to ship in a Google Phone, endurance is the Pixel 3a XL’s forte. Add in power saving features like Adaptive Battery to the mix, and I managed to squeeze out more than 8 hours of screen-on time (SoT) on a single charge. Calling that impressive is an understatement. 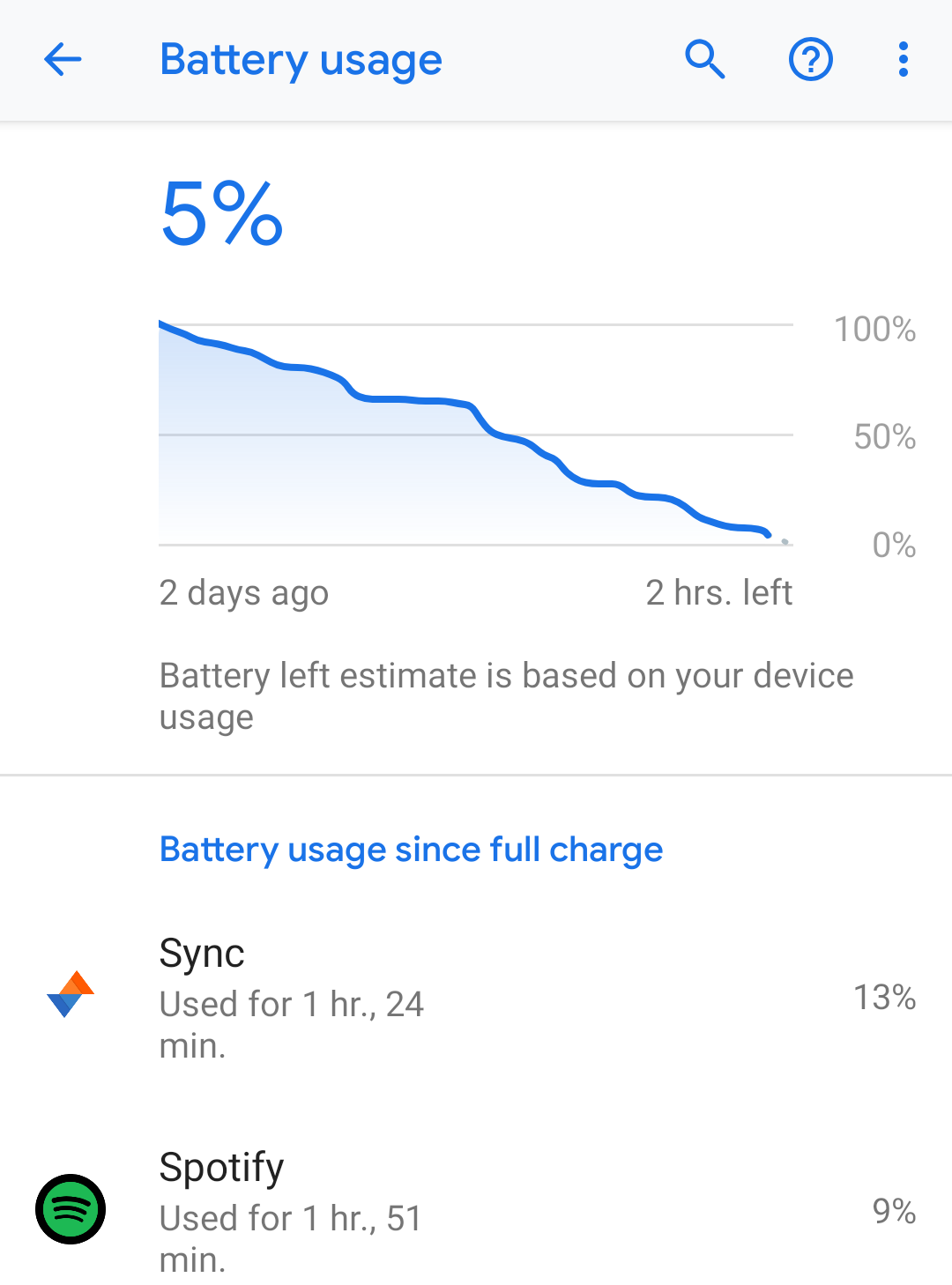 Expect two days worth of battery life if email, music streaming, calling, and various social media applications are your daily go-to apps. Even with YouTube, Lightroom, and other productivity tasks added on, I never had to charge it within a single day. Most of my apps run with dark mode enabled, my screen brightness is set to auto, and I try to connect to Wi-Fi whenever possible.

The Qualcomm Snapdragon 670 supports Qualcomm’s Quick Charging 4.0+, which can charge the battery to 50 per cent in 15 minutes. Charging to 100 per cent takes a lot longer, though.

At $649, the Pixel 3a XL is fighting an uphill battle against faster competitors at similar price points, especially ones from value-oriented Chinese phone makers. To up its appeal, Google has to compete in an area mid-range phone rarely prioritize: camera quality.

Value phones between the $500 to $800 price bracket typically follow a performance-first philosophy. In doing so, they tend to sacrifice secondary features in order to squeeze in a higher-performing processor, more RAM, and better materials. Sometimes, these phones are sold under a different brand as to not cannibalize their premium counterparts. For example, Honor phones, known for their excellent value, are owned by Huawei.

The Pixel, being consolidated under a single brand, chooses not to spin off into a new brand for its midrange. Thus, with the Pixel 3 occupying Google’s high-end, Google needed to properly segment its midtier phones. While omitting a full-glass body, wireless charging, and dual-front cameras is a sensible decision to shave cost, the trickier thing is performance. Since performance is a key differentiator between price segments, Google couldn’t utilize a flagship chipset, therefore leaving a midrange chipset as the only choice.

At this point, it should go without saying that these cost savings enabled Google to retain its prime feature — the camera — on the Pixel 3a XL. With it, Google is hoping to drive sales with a fresh strategy: by blending sufficient performance with a brilliant camera.

The Google Pixel 3a XL can have a profound impact on Google’s bottom line. By tucking its exceptional camera onto a more accessible price point, Google’s strategy is to drive value through features, battery life, and software support rather than competing in performance. It understands that at the midrange, many users simply don’t care if the phone has the latest and greatest chipset. As long as it runs well — and the Google Pixel 3a XL does so exceptionally — features take precedence. Even though its dated design can be a turnoff, and missing niched features like wireless charging hurt its appeal, they’re all overshadowed by its supreme shooter. With that said, some level of certified weather resistance would be more reassuring to business users who can’t afford to have their devices fail.

Ostensibly, I’m a big proponent of the Pixel 3a XL, but even I must admit the spec advantages of its competitors. Phones from China like the OnePlus 6T and XiaoMi Mi9 all offer faster chipsets and more RAM, which all help with multitasking. The tradeoff, ofcourse, is that gorgeous camera and stock Android experience. It’s also important to note the experience, rather than the spec sheet, when purchasing a phone. While I certainly would confidently recommend the Pixel 3a XL for any mainstream user, my phone review only caters to the most common business applications. Those who use specialized or proprietary applications should decide on a case-by-case basis.