Now that the launch hype around Windows 8 has settled down, it’s time to get down to the business of figuring out how to use Microsoft’s latest operating system to your own business’s best advantage.

Two new resources are here to turn to. First, you’ve got to decipherthe ins and outs of Windows 8 itself. For that, you can thank the folksat Dell who have just released a free e-booklet called Windows 8 ForDummies. It’s a quick reference guide that breaks down howto getstarted in a tutorial style. It’s available as a freedownload.

Next, to make sure your Windows 8 experience is secure, take a peek atAvast Free Antivirus Software. The company says it’s the firstantivirus software to earn the Windows 8 certification from Microsoft.And it’s also the first one to be offered in the Windows store. 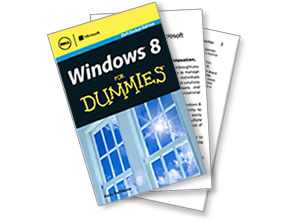 The Windows 8 For Dummies ebook isavailable as a free download. (Photo: Dell)

Christine Wonghttp://www.itbusiness.ca
Christine Wong has been an on-air reporter for a national daily show on Rogers TV and at High Tech TV, a weekly news magazine on CTV's Ottawa affiliate. She was also an associate producer at Report On Business Television (now called BNN) and CBC's The Hour With George Stroumboulopoulos. As an associate producer at Slice TV, she helped launch two national daily talk shows, The Mom Show and Three Takes. Recently, she was a Staff Writer at ITBusiness.ca and is now a freelance contributor.
Previous articleMobile marketing advice from fast food brands
Next articleGovernment adds ‘insult to injury’ as musicians denied microSD levy