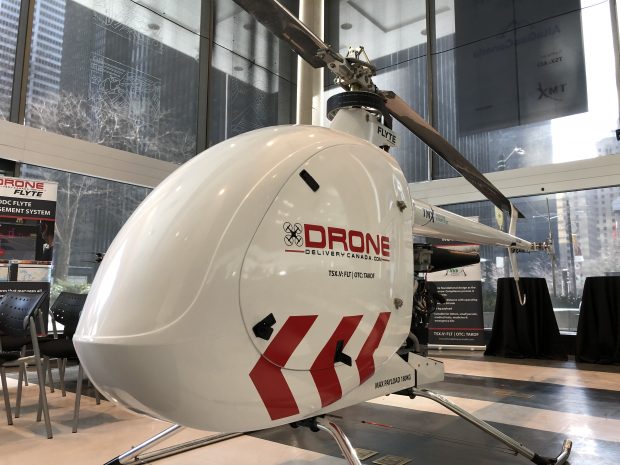 It’s not every day you get to see a helicopter in a downtown Toronto event space surrounded by glass and Bay Street skyscrapers. Unless the copter in question is Drone Delivery Canada’s (DDC) Condor, the company’s latest cargo drone capable of carrying a maximum payload of 180 kg (400 lbs) over distances up to 200 km.

Unveiled to media and the public on Tuesday, the Condor has been under development for more than a year, and is the largest of its fleet of previously released battery-powered drones that include the Sparrow (10-lb payload), Robin (25 lbs) and Falcon (50 lbs). The Condor is the first DDC drone to be powered by a gas propulsion engine, affording it the power it needs to carry that level of payload up to those distances and withstand a wider range of severe weather, said DDC CEO Tony Di Benedetto.

With its 20-ft wingspan (or rotor blade length) and sleek design the Condor looks unmistakably cool, and you just kind of want to hop in a take it for a spin. Alas, this is not a drone for moving people. Since DDC started in 2014, its goal has always been to make drones to help remote communities in Canada, and eventually around the world, get better access to essential items such as food and medical supplies.

“Back in 2013, we looked at drones as a logistical solution,” Di Benedetto tells ITBusiness.ca. “Not necessarily to move a pizza to your door two minutes faster, but really as a way to solve an infrastructure problem in remote parts of the world.”

Di Benedetto went on to point out that Canada alone has about 1,000 remote communities that exist that don’t have roads or proper access for goods to move around. “And we said maybe there’s a route here to use drones as a logistical environment to help these communities,” he said, later adding that it is DDC’s goal to penetrate 500 of those remote communities in the next five years.

And the company is already off to a good start. In the fall of last year, DDC, with the support of Transport Canada, successfully completed a series of beyond-visual-line-of-sight test flights (BVLOS) between the remote Northern Ontario communities of Moosonee and Moose Factory, just south of James Bay.

The pilot project used DDC’s Robin drone, powered by its proprietary Flyte navigation and management system, to deliver medical supplies (including 400 blood specimens for essential testing), food, automotive parts and other general parcels between the two communities that are divided by the Moose River. The Flyte system is the brains of the operation and is drone agnostic, meaning it can be used in any vehicle, including the Condor.

DDC and the Moose Cree First Nation communities have since signed a $2.5 million deal to use the drone system to service the region with drone deliveries as early as the third quarter this year. With that first big step complete, the Condor’s increased capacity brings the potential of the system to a whole new level. So what does Di Benedetto see as Condor’s main potential?

“This, for us, is a game changer. When you look at this size of vehicle it becomes efficiencies of scale,” Di Benedetto says. “Our business philosophy is always crawl, walk, run. We had to start with something small to get to something bigger – Sparrow, Robin, Falcon and now the Condor. The Condor allows us to operate what we call ‘milk runs,’ or tying in multiple points, multiple communities or locations on a predefined path. We can operate multiple flights, three-four times a day, essentially moving cargo and connecting these points. So, whether you’re looking to ship a pallet load of food, medical supplies, blood samples, which we’ve done with Health Canada this past summer, or fuel – whatever – now we’re able to drive the cost of transport down and it all becomes much more efficient.”

The federal government spends roughly $400 million per year moving blood specimens in Northern communities across Canada. With the use of drones, Di Benedetto says they can do this for pennies on the dollar.

And the Condor is just the tip of the iceberg in terms of transport capacity. The company says they’re working on a newer model that can haul up to 1,500 lbs.

DDC is currently working with Transport Canada to meet its flight regulations and protocols, and is hoping to start testing the Condor in the third quarter of this year. Which is perfect timing as DDC’s new 16,000 square foot operations facility in Vaughan, Ontario, is expected to be up and running by then. The facility will house 25 drone operators who can oversee flights in Canada and around the world.

“We are fully engaged in commencing commercial operations and require a robust operations center to house ‘mission control’ to oversee the flight of our autonomous drone fleet,” Di Benedetto said in a release earlier this month. “For context, our operations center will be very similar to that of a commercial airline with our software integrating into active air space.”

Derek Malcolmhttps://www.itbusiness.ca
Derek Malcolm is a writer, editor and content specialist based in Toronto. He has been covering the world of consumer technology for more than 18 years, and is the former Editor-in-Chief of Connected.rogers.com. Follow him on Instagram @derekgmalcolm or Twitter @derekmalcolm
Previous articleHashtag Trending – Password managers insecure; Qualcomm releases 2nd-gen 5G modem; Google to enter gaming
Next articleHashtag Trending – Netflix commits to Toronto; Google snafu with Nest; Apple announces overhaul