Cybercrime affects minimum of two-thirds of all Canadians

More than two-thirds of Canadians have been victims of cybercrime in the past year, costing a total loss of $863 million in cash and an average of nine days of lost productivity per person, according to a survey by Symantec Corp.

The security vendor’s 2011 Cybercrime Report shows the world’s victims lost $114 billion in cash and $274 billion in time spent on repairing damages done. That total is approaching the economic scale of other notorious black markets such as all of global drug trafficking, estimated at $411 billion. Compared to the rest of the world Canadians fall victim to cybercrime less often than many other countries> Canada tied with Spain for ninth most-affected country overall. China, South Africa, and Mexico ranked as the top three most-hit countries, and the U.S. tied with Switzerland for seventh overall.

The survey of 19,636 interviews revealed a general apathy about cybercrime despite it impacting 14 adults every second on average, says Lynn Hargrove, director of consumer solutions at Symantec Canada. About 41 per cent of people globally don’t have up-to-date security software, while 35 per cent of Canadians report the same.

“People still aren’t protecting themselves against it,” she says. “I was shocked at that number to be honest, because we keep beating the drum that you need to have software.” 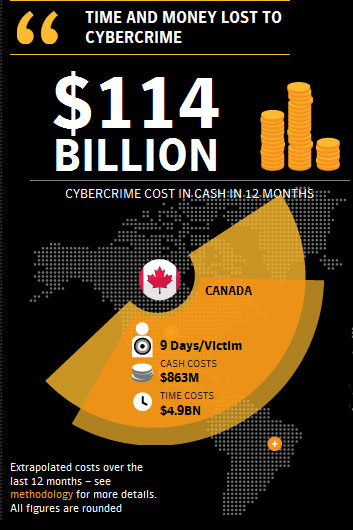 Canadians lost $114 billion in cash to cybercrime in the past 12 months.

Given Symantec’s general definition of cybercrime as any misuse of computer or electronic devices with criminal intent, it’s surprising that not 100 per cent of respondents reported being affected, says Brian Bourne, co-founder of security conference SecTor and ITBusiness.ca security advisor. It’s likely that many have been affected by a computer virus, but perhaps were not even aware of it. Since Symantec’s data relies on people knowing they’ve been scammed or hacked, the reported data represents the minimum number of victims.

Symantec is urging consumers and businesses alike to recognize the potential to be hit by cybercrime and put proper protection in place. Hackers are out for bank accounts and credit card numbers and personal information that can be sold on the black market for the purposes of identity theft.

“Small businesses are not immune,” Hargrove cautions. “Small businesses use credit cards to transact online all the time, and probably more often than the average consumer. The survey is a wakeup call for everybody.” 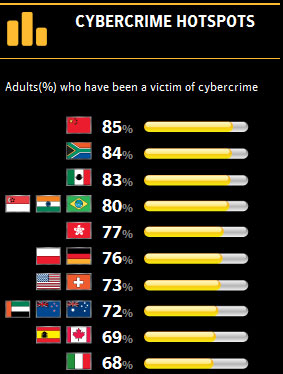 China had the most victims of cybercrime.

The most common types of cybercrime in Canada were computer viruses or malware, online scams, and phishing.

“Symantec is correct, all businesses and consumers should have a process in place to keep operating system and application patches current and some type of anti-malware solution in place,” Bourne says.

Most modern operating systems have a sufficient built-in firewall, leaving end users to install an anti-virus or anti-malware program, he says. There are quality options available both on the free and paid-for software side. But even with security software, users must realize that protection isn’t bulletproof and malware is evolving at a rapid rate and being combined with clever social engineering tactics.

“Malware techniques evolve much faster than the security products, and there is a great deal of information available for malware authors on how to evade detection,” he says.

This was Symantec’s first year asking specifically about mobile malware in the survey, and it found that 10 per cent of users had been affected by it. Only five per cent of Canadians were hit by some form of mobile malware.

That’s likely because adoption of Android phones is lower in Canada compared to other areas of the world and Google’s open operating system is the most targeted by hackers, Hargrove says.

Brian Jacksonhttp://www.itbusiness.ca
Editorial director of IT World Canada. Covering technology as it applies to business users. Multiple COPA award winner and now judge. Paddles a canoe as much as possible.
Previous articleGoogle++++: 4 add-ons to enhance your social networking
Next articleWill Intel’s Ultrabook catch on?