Canadian companies are matching and in many ways exceeding their international counterparts when it comes to investing in digital technology, according to the 2015 Digital IQ Survey by PricewaterhouseCoopers (PwC).

That’s the good news. The bad news is that only 24 per cent of the annual survey’s Canadian respondents believe that “digital” refers to all investments being made to integrate technology into every aspect of a business, and while researchers have long found a correlation between a CEO’s commitment to investing in digital technology and how well it’s applied to the organization, this year’s survey revealed that Canadian CEOs lag behind their international counterparts, with only 65 per cent considered “digital champions” by the executives under them – a number the report’s Canadian supplement says it hopes to see “increase significantly.”

“Digital encompasses a broad set of trends and capabilities that are challenging Canadian organizations to innovate,” Philip Grosch, PwC Canada’s national digital services leader, said in a statement. “Digital has already had a profound impact on the way we use data to create insights and on the way technology is deployed by the enterprise in the age of Cloud. Organizations need to weave these realities into all aspects of their business—their strategy, structure, how they engage with employees and customers and how they innovate and deploy new technologies.”

Globally 41 per cent of survey respondents said that “digital” refers to all investments made to integrate technology into every aspect of a company’s operations, and 73 per cent have CEOs who are seen as digital champions.

However, Canada led or was in line with international trends when it came to nine other digital technology-related practices identified by PwC in the survey, which has been conducted every year since 2007. 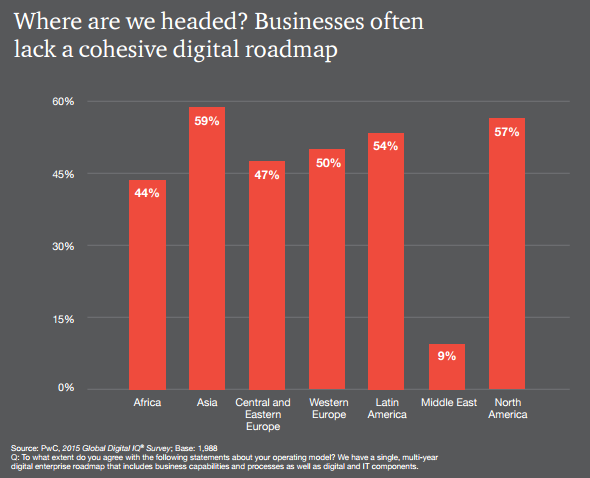 Worldwide, PwC’s survey also discovered that a range of executives were responsible for digital enterprise investments, and just how much digital IQ varied across industries, unlike another recent PwC study, this time around the technology industry came out on top.

Here’s an infographic showing how Canadian companies and executives compare to the rest of the world when it comes to embracing digital: 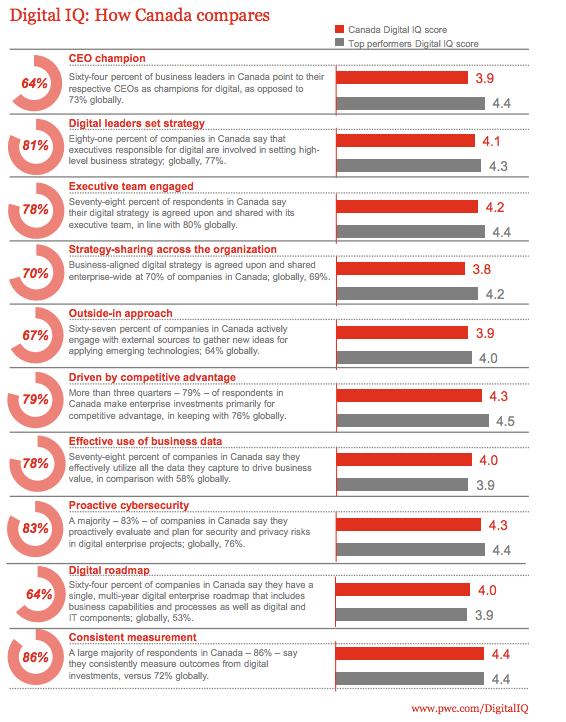 Eric Emin Wood
Former editor of ITBusiness.ca turned consultant with public relations firm Porter Novelli. When not writing for the tech industry enjoys photography, movies, travelling, the Oxford comma, and will talk your ear off about animation if you give him an opening.
Previous article
Canadian alternative to Uber launches with backing of taxi industry
Next article
The top 5 stories you liked on ITBusiness.ca in 2015