Setting up new users at a growing small business can be expensive and tedious. For every new worker that joins a firm, a new desktop or laptop computer must be bought, set up with an OS and the company applications, connected to the network and protected with security software.

No doubt the IT managers of many smaller firms sometimes look jealously at the virtualized desktop tools on offer to their enterprise peers. Tools by the likes of VMware or Microsoft’s Hyper-V on Windows Server 2012 that allow one central computer to manage the desktops of multiple user screens, instantly provisioning new users on request and delivering a consistent experience wherever they happen to be working and whatever device they happen to be using.

Brian's recommended reading:
NComputing rolls out desktop as a service for SMBs
3 megatrends driving workstation virtualization into the SMB

Calgary-based Userful Corp. might have the answer. On Wednesday it announced its new desktop virtualization software, Userful Multiplatform targeted specifically at small businesses. Like those enterprise solutions it allows you to replace multiple hardware units with one powerful computer that distributes desktops to multiple types of displays. So it’s possible to work in a traditional desktop scenario, or with a tablet, or a touch-screen kiosk, for example. 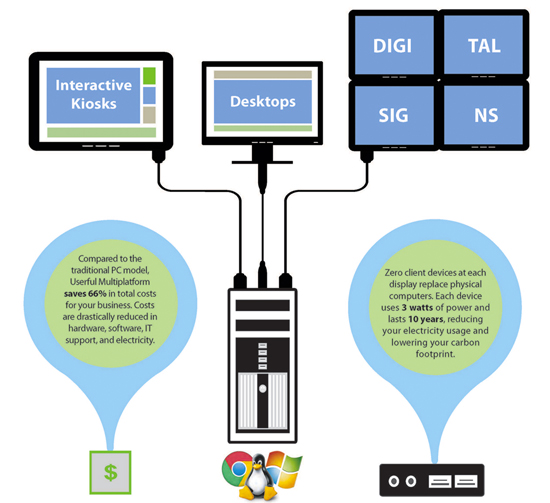 There’s also some different application ideas that Userful puts forward for its software. Combine it with a SMART interactive projector for instance to collaborate in a boardroom, or use it to manage digital signage across multiple displays.

This video gives a good overview of the pitch from Userful:

Userful already has clients in the U.S. including an IT support centre for call centres based in Las Vegas and an Austin, Texas-based medical clinic.

Userful Multiplatform is sold for USD$199 per user and that includes the software and client device. Userful is looking to work with resellers as well.