In case you missed it, two solitudes have emerged in Ottawa over the past decade that have nothing to do with French and English.

A cultural split has developed in Ottawa’s technology sector, whichonce dominated headlines and stock markets with the dazzling successesof Nortel Networks Corp., Corel Corp. and others.

The two new classes living side-by-side but worlds apart are the ByWardMarket upstarts and the Kanata veterans.

“There’s the downtown, ByWard Market crew like us that have beencreated here  —  and then the old telecom people inKanata. We don’t have a lot to do with each other,” says Tobias Lutke,CEO of Shopify,an eight-year-old company whose e-commerce platform isused by clients such as General Electric Co. and Angry Birds creatorRovio Inc.

Shopify is one of Ottawa’s biggest startup successes, having raisedover $20 million in venture capital. Lutke and hiscohorts are hip,young entrepreneurs working (and sometimes living) out of aging loftspaces in the city’s historic ByWard Market neighbourhood just east ofParliament Hill. Amid the Market’s constant stream of tourist traffic,they are roughing it in open concept offices converted from formergovernment buildings that are drafty in Ottawa’s insanely frozenwinters and stiflingly hot in its surprisingly humid summers. 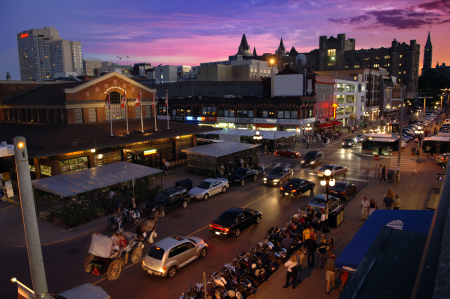 The ByWard Market is home to a newgeneration of Ottawa tech firms.

The second group is far from the other one, both geographically andfiguratively. Out in the sleepy west end suburb of Kanata, its memberswork in large, multi-storey office towers or glass campuses and live insprawling homes. Some of these high-tech business veterans live inmansions in the tony diplomat’s enclave of Rockcliffe Park downtown,but still have memberships at one of the three golf and country clubsin Kanata that remain popular with the town’s high-tech old guard.

Simply put, the Kanata veterans made it big; the downtown startup kidsare now vying to become Ottawa’s Next Big Thing. Yet a full decadeafter the dotcom bubble burst and Nortel began its slide, why hasn’tCanada’s next big tech giant emerged out of Ottawa’s strong high-techroots?

Ottawa was partly a victim of its own focus on traditional wire-linetelecom, says Bruce Lazenby, president and CEOof the city’s neweconomic development agency, Invest Ottawa.

“We set out to solve a good part of the world’s (communications)problems,” Lazenby says of Ottawa’s starring role in the earliest daysof the Internet. “We had Nortel and Mitel and others that were reallysuccessful. Then all of a sudden the world said ‘thanks very much,we’ve got all the dark fiber we need – now we need content.’ And Ottawawent oh, we’re not very good at content.”

As the global tech industry shifted its focus from wired to wireless,firms like Waterloo, Ont.’s Research in Motion Inc. took overCanada’sIT spotlight. Within Ottawa, Nortel failed to make the leap to wirelessand got caught up in an alleged accounting scandal. Corel lost its wordprocessing suite war with Microsoft Corp. Many of the city’s mostsuccessful tech firms were acquired for huge sums of money, includingNewbridge Networks Corp. (bought for $7 billion by Alcatel) and CognosInc. (acquired by IBM Corp. for $4.9 billion).

Anchor companies gone
“All the independent Canadian-traded anchor companies, to a largedegree, have gone and been replaced by branch plants. That’s a massivechange,” says Dr. Adam Chowaniec, chairman of BelAir Networks, anOttawa wi-fi firm just acquired by Ericsson for an undisclosed sum.

“The biggest loss is that (although) there’s tons of technology andqualified technologists around, we’ve lost a lot of the business peoplewho can help grow these companies,” Chowaniec says.

Shopify startup wiz Lutke isn’t so sure about that. He says the veterantech entrepreneurs are still in Ottawa – or Kanata, to be more correct– but they just haven’t put enough of the money they made duringOttawa’s 1990s heyday back into funding the next generation of techsuperstars.

“There’s been a complete breach of the pay-it-forward premise. Usuallyyou take the money you made and put it back in (to startups). Theproblem is, one generation of successful people stopped doing that,”Lutke says.

Terry Matthews‘ ears must beringing. The Welsh-born billionaire, whofounded Newbridge and was knighted by the Queen, has pumped millions ofdollars into local startups through his venture capital firm CelticHouse Venture Partners. But Lutke believes Matthews, like most ofOttawa’s old guard, focuses too much of his attention (and money) ontelecom plays instead of newer sectors.

“Terry ended up being the one guy (investing in local startups) and hehad a monopoly. Clearly Ottawa is better off with him than without him.But things would be so much better if he looked around to see thattimes have changed,” Lutke says.

The most recent sign of that change was the shutdown of the OttawaCentre for Regional Innovation a few weeks ago. OCRI was amembershipdriven industry association providing networking, mentoring, workshopsand events for the local tech sector. Mayor Jim Watson replaced OCRIwith Invest Ottawa, a new agency that will focus more on overalleconomic development in the city instead of just the tech industry.With Watson as co-chair, Invest Ottawa will also take more directionfrom (or at least be more accountable to) city hall than OCRI. 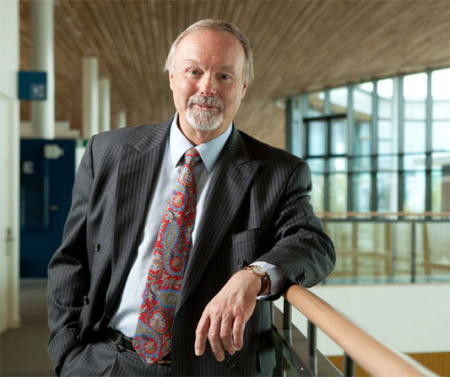 Sir Terry Matthews has helped pumpventure capital into Ottawa startups but the city needs more investorswilling to step up to the plate, Lutke says.

The creation of Invest Ottawa followed rumblings that OCRI, founded inthe mid-1980s, had perhaps strayed too far from its original mandateand focused more on social events than entrepreneurship.

“OCRI was running a school breakfast program,” Lazenby says. “A lot ofpeople said why are you doing that, how does that relate to economicdevelopment?”

To signal that the shakeup is more than just window dressing, Lazenbyand Watson have released a list of quantifiable targets for InvestOttawa to aim for annually (think jobs created, startups founded,investment deals signed). They’ve also made it clear that one of InvestOttawa’s top priorities is to give more support to the city’s startups.

Plans include a new program where startups can seek advice from a paidentrepreneur-in-residence; a film commissioner who’s been hired toboost Ottawa’s movie and TV production and related digital mediatechnologies; a ‘soft landing’ initiative to provide firms from outsideOttawa with a coterie of one-stop-shopping business services once theydecide to locate in Ottawa; and a 20,000-square-foot accelerator space,something OCRI never had.

Newinvestment fund
“We recognize there’s a dearth of available capital out there for smallcompanies. So we’re actually going to create a fund we can use toinvest in these companies. We won’t own or run the fund. I want it runas a separate for-profit business where people will invest because theywant to make money,” Lazenby says.

Lutke is encouraged by what he’s seen of Invest Ottawa so far. But as asuccessful startup entrepreneur who came to Ottawa from Germany in2003, he sees a problem deep within the city’s psyche that perhaps onlyan outsider can discern.

“People here generally aren’t terribly good at thinking big,” he says.“(We need) a mindset of people who can take any idea and just blow itup to be a larger idea.”

Though he acknowledges the fear of risk and failure is “aCanadianproblem, not an Ottawa problem,” Lutke adds that Ottawa’s traditionalreliance on unionized civil service jobs as the backbone of the city’semployment base might also stifle some of the motivation there to takerisks or start a company rather than merely look for a job.

So how in the world did Lutke himself manage to build Shopify into aworld class startup in this kind of Ottawa environment? He brought sometalent over from his native Germany, hired lots more from Ottawa’s richpool of post-secondary graduates and existing high-tech workers, thengot the bulk of his money and inspiration from Silicon Valley. Shopifyraised $15 million from valley investors last October and its keyadvisor is valley-based Tim Ferriss, an angel investor in headlinegrabbers Twitter, Digg and StumbleUpon.

“We think of ourselves as a San Francisco startup based in Ottawa,”Lutke explains. “You can go up to anyone (in Silicon Valley) and tellthem ‘Hey, I have this little idea and I’m gonna go change the world.’And everyone there is gonna give you a high five and say ‘Go for it.’It’s taking ideas and making them big.”

1,900 startups in Ottawa
It’s a philosophy that Chowaniec wants to see spread across Canada.He’s a veteran of Ottawa’s tech sector himself: before he was chair ofBelAir Networks, he was CEO of Tundra Semiconductor and chaired theboards of Microbridge Corp., Sibercore, Liquid Computing and ZarlinkCorp. Chowaniec has just signed on to be chairman of Startup Canada, anew charitable foundation that’s holding 30 town hall meetings acrossCanada to ask entrepreneurs what type of support they want and need.Recommendations that flow from those events will become a white paperwhich Chowaniec hopes to present to Prime Minister Stephen Harper.

“(We) need to build a culture of entrepreneurship,” Chowaniec says. “Weneed to focus on changing the underpinning culture.”

There is evidence of rebuilding in Ottawa, with a stream of newstartups like Shopify, Gazaro, and BlackCherry Digital Media Inc.making names for themselves. According to Lazenby, there are 1,900startups in the city, with strong concentrations in medical devices,life sciences, defence and security, and cleantech. Some of the newercompanies are even helmed by members of the old guard: ecowaste firm Plasco Energy Group is led by veteran entrepreneur RodBryden, ex-CEO of 1990s era biotech company WorldHeart Corp.

The upstarts are also doing their part to ensure the coming generationof startups will benefit from what they’re learning and doing rightnow. German-born Lutke remains in Ottawa, raising one child in the citywith another on the way and building his company’s global clientelefrom its ByWard Market base. He’s also putting his own money where hismouth is.

“I personally (take) some of the money I make and put it into otherstartups. And people should expect no less of me.”

“The downtown crew is large enough now to be its own support network,”he says.

Christine Wonghttp://www.itbusiness.ca
Christine Wong has been an on-air reporter for a national daily show on Rogers TV and at High Tech TV, a weekly news magazine on CTV's Ottawa affiliate. She was also an associate producer at Report On Business Television (now called BNN) and CBC's The Hour With George Stroumboulopoulos. As an associate producer at Slice TV, she helped launch two national daily talk shows, The Mom Show and Three Takes. Recently, she was a Staff Writer at ITBusiness.ca and is now a freelance contributor.
Previous articleT.O. security firm offers on-call risk advisors on IT, security, compliance issues
Next articleHands on with Apple’s New iPad