Levels of computer malware continue to soar sky high with more than 8 million samples detected in the first quarter of 2012, according to a McAfee Inc. report.

Significant jumps at the beginning of the year are seen in mobile malware, with 8,000 samples collected in the quarter. More than 6,000 of those samples were new specimens of malware, compared to about 500 new malware samples detected in the previous quarter. Google’s Android platform is by far the most impacted mobile operating system, the target of nearly 7,000 out of the total samples. 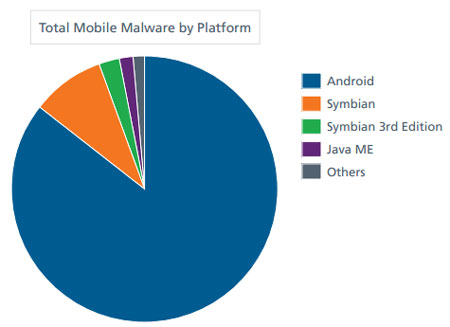 The 1,200 per cent increase in Android malware is driven by financial incentives, according to McAfee Labs researcher Carlos Castillo.

“We often see deceptive applications that send SMS messages to premium-rate numbers without the user’s consent or that run man-in-the-middle attacks to forward SMS messages to an attacker with a user’s mTANs (Mobile Transaction Numbers),” he writes in a blog post. “In the latter case, the attacker uses the information to defeat the two-factor authentication security scheme used by several banks and financial entities around the world.”

Apple’s Mac OS X environment is consistently being targeted by more malware and could reach 100 million detected samples by the end of 2012. Macs have long been known to be less virus-prone than Windows-based PCs, but the Flashback Trojan affected many Apple users in March. McAfee detected about 250 new Mac malware samples in the quarter. 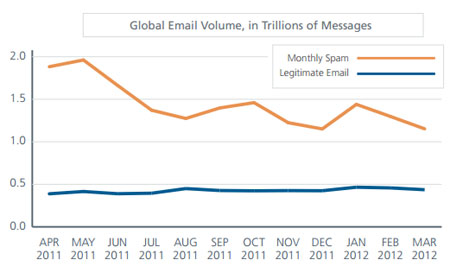 Spam levels went down after a January spike.

One piece of slightly good news in McAfee’s report concerns global spam levels. Despite a spike in levels of unwanted e-mails sent in January, the downward trend continued, coming to a rest at just more than 1 trillion spam messages sent in March. That’s compared to almost 500 billion legitimate e-mail messages sent in the same month. As recently as May 2011, 2 trillion spam messages a month were being sent.

Brian Jackson is the Associate Editor at ITBusiness.ca. E-mail him at [email protected], follow him on Twitter, connect on Google+, read his blog, and check out the IT Business Facebook Page.