Anyone that’s tried to decipher a menu in a restaurant while travelling knows the pain of not being able to make sense of foreign language in print, but a new mobile app from Moscow-based ABBYY might just have the answer.

For those times when the phrase “it’s all Greek to me” is to be taken literally, ABBYY says its Lingvo Dictionaries for Android app can provide translation. The app makes use of the camera on your Android smartphone and the live preview mode. Just point your camera at that indecipherable menu and tap the screen to get it translated for you. The app can allow you to select any length of text, so you can highlight one item on a menu, or a whole section of it to see your options. 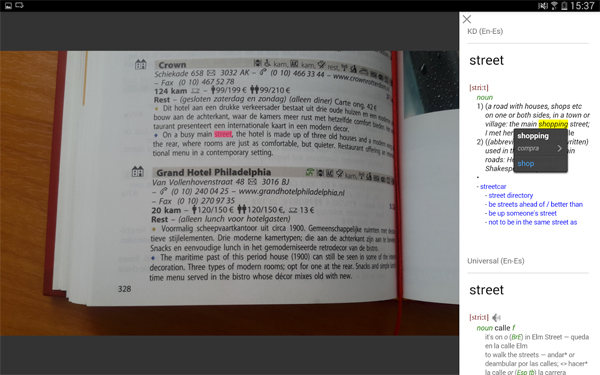 The app costs $1 to download and then you’ll have to download some dictionaries to your device. There are free basic dictionaries for English, French, Russian, and German available as well as paid-for dictionaries in many other languages. The positive about downloading the dictionary to your device is that you don’t need to connect to the Internet to get a translation completed, and using data while you’re traveling is usually difficult as you might have to pay hefty roaming fees, or just not have a compatible network to connect with.

Many of the common words detected by the app can be played to audio so you can hear how to properly pronounce it, so you can even order off that menu without too much embarrassment.

For developers, the Lingvo API is available to provide one-tap translation feature and advanced dictionary support. So if a user has Lingvo Dictionaries 4.0 installed and another third-party app that makes use of the API, they can get translation within that app as well.

Previous versions of the app have been reviewed more than 2,300 times on Google Play and received an average rating of 3.8 out of 5.