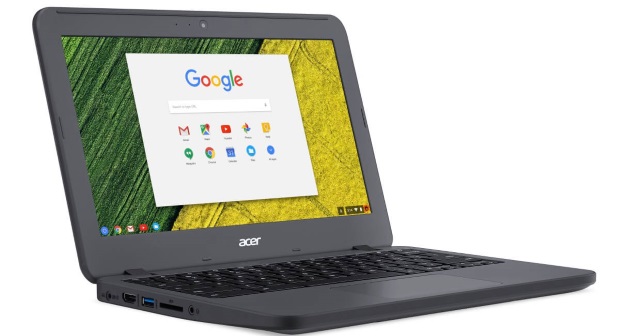 Do you often drop your laptop, then push it with your chair when trying to pick it up? Or spill your coffee all over it? If the answer is yes, you might want to check out Acer’s new Chromebook 11 N7.

The Chromebook 11 N7 appears to be expressly designed for users prone to breaking their devices. It meets the U.S. military’s MIL-STD 810G standard, meaning it could start up again even after a 132-pound object – say, your computer desk – fell on its cover. Reinforced case and hinges protect the Chromebook’s joints, and thanks to what Acer calls its “corner-shield” structure and rubber keyboard it can tolerate drops up of up to four feet.

The spill-resistant keyboard also protects against spills of up to 11 fluid ounces – around 325 mL, or slightly less than a full tall latte from Starbucks – with a gutter system underneath the keyboard designed to drain water from internal components. In addition to emphasizing the N7’s durability, Acer is boasting that its latest Chromebook has a battery life of up to 12 hours, and with no fans it’s likely to be less disruptive in a quiet office as well.

Other features include a touch-screen model, Bluetooth 4.0, two USB 3.0 and one HDMI port, an SD card reader, 4GB of RAM, and either 16GB or 32GB eMMC storage. And while the N7 can withstand heavy objects, the device itself is quite let – about three pounds, and less than an inch thick.

The Chromebook 11 N7 is expected to be released in North America later this month starting at $229 USD.

Alex Raduhttp://www.computerdealernews.com
is a Video Producer for IT World Canada. When not writing or making videos about the tech industry, you can find him reading, watching TV/movies, or watching the Lakers rebuild with one eye open.
Previous article
Asus unveils ultra-light business notebook at CES
Next article
Juniper predicts more chatbots and fintech in 2017

Google is replacing some Android apps with web apps on Chromebooks