Windows Mobile 6.5 a “fine-tuning” rather than full-scale upgrade

Today’s release of Windows Mobile 6.5 is not the complete overhaul that users have been demanding. For that the smartphone-using public will have to wait for Windows Mobile 7, scheduled to release in the last quarter of 2010.

In the interim, Windows Mobile users are getting a fine-tuning of version 6.1. Windows Mobile 6.5 — available now on phones from manufacturers such as HTC, Samsung, Nokia and LG and from wireless carriers AT&T, Verizon and Sprint — is already facing criticism, and some of it harsh, for being just a slight renovation.

Even Steve Ballmer has admitted that the road to Windows Mobile has been rough. Additionally, a recent study forecasts Windows Mobile as a long shot to succeed in the competitive smartphone space that includes the iPhone, BlackBerry and Palm Pre.

Nevertheless, Windows Mobile 6.5 does have noteworthy enhancements such as a whole new user interface, a mobile app store and a Web-based data backup service.

Windows Mobile 6.5 serves up Microsoft’s most finger-friendly mobile UI, with scrolling and panning through screens made easier. It has replaced all the stylus-friendly menus with finger-friendly menus. Also part of the redesigned UI is a new Start screen, which has eschewed the “honeycomb” look for a staggered list of more dimensional, modern-looking icons.

A new Lock Screen is another UI area of improvement. In addition to simply locking and unlocking the device, the Lock Screen gives a user many points of entry directly back into notifications such as a new text message or voice mail. So you can go from locked mode to reading a new text massage in one movement through a separate unlock slider.

The final big piece of the revamped UI is a new Today Screen that practically replicates the Zune home screen with a big-fonted text list of commonly used functions such as calendar, e-mail, text, pictures and music that can be scrolled through with a highlighted bar.

It’s not an exclusive Windows Mobile 6.5 feature per se, but Windows Marketplace for Mobile is Microsoft’s first full-bore mobile application store. The store is available now as the way to download apps to a Windows phone.

The importance of Microsoft having a mobile app store cannot be overstated. Apple recently announced that it has 85,000 applications now available for the iPhone and iPod Touch in its App Store. Early reports say Windows Marketplace for Mobile currently contains 246 applications. 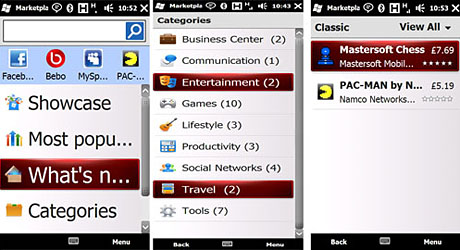 My Phone for Backup

The My Phone backup service is one of the most highly-regarded new features. It is fully integrated into WinMo 6.5 and allows users to automatically back up personal data such as calendar appointments, photos, contacts, music, text messages and video to a password-protected Web site.

All backed up data can be accessed from the Web. If a user loses a Windows phone or switches to a new one, that person can restore all his or her data in a few clicks from the site.

Most new Windows phones will come with My Phone pre-installed, but it can be downloaded to devices at this site. Microsoft does not charge a fee for using My Phone.

Microsoft has made it a goal with Windows Mobile 6.5 to bring the “desktop” browsing experience to a mobile phone. In the past, the performance of Internet Explorer on Windows Mobile phones has been criticized for slowness and for lacking any compelling browsing features.

To that end, Mobile Internet Explorer 6, the browser used in new Windows Mobile 6.5 phones, has a redesigned, finger-friendly interface with smoother panning and scrolling, more speed and support for HTML, a new JavaScript engine and an Adobe Flash plug-in for better viewing of videos.

Navigation commands are now in the form of round icons on the bottom of the page that can be easily tapped with a fingertip.

Does the IE overhaul in WinMo 6.5 make for better mobile browsing? No reviewers are raving about it, but CNET credits general improvements, while TechCrunch has some less gentle words.