Which mobile browser is best? Safari, Web OS or Android

Browsing the Web while you’re on the move is one of the perks of owning a smartphone. The new touchscreen phones now entering the market are ideal for this job, as they’re equipped to display Web pages on their large, high-resolution screens.

But not all mobile browsers are easy to use or pleasant to the eye. Many smartphone buyers base their buying decision on the sexiness of the device itself, without examining the software inside. And many of them stick with the browser that came with the phone, regardless of its merits. Sure, you can check out various third-party browsers, but even if they load pages faster, they won’t offer the same integration with your phone and the same interface friendliness as the browser that came loaded on your handset.

For this comparison, I tested several phones from different modern mobile operating systems. I looked at the iPhone 3G, the iPhone 3GS, the Palm Pre, the Nokia 5800, the Nokia N97, the T-Mobile G1, the HTC Hero, the BlackBerry Storm, and some Windows Mobile devices.

SPOILER ALERT: We give our conclusions and pick the best browsers at the bottom of this page, so consider following the links in the box at right to our browser “mini-reviews” first.
What are the most popular browsers?

Researchers trying to determine the market share of various mobile browsers come up with different results, but the iPhone is consistently the leader.

There are conflicting views of the raw market-share numbers that different mobile browsers command. Both Net Applications and StatCounter monitor this market, but the numbers they come up with (see the charts at left) are not identical.

Inconsistencies aside, most research into mobile browsers’ market share has found at least some degree of iPhone domination. StatCounter found that 36 percent of mobile Internet access occurs via iPhones, while Net Applications found that the iPhone holds approximately two-thirds of the market (66 percent).

What about the “other” browsers? 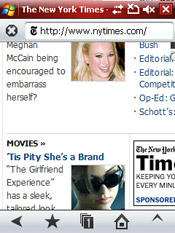 Several third-party developers have created browsers–such as Google Android and Nokia’s Symbian S60–for open platforms. Among third-party developers, Opera leads the way with various editions of its browsers for Android, Nokia, BlackBerry, and Windows Mobile phones (but not for the iPhone or the Palm Pre).

The Opera mobile browser’s strength lies in its speed. Opera 9.7 uses compression technology to pack the pages you want to visit onto its servers in smaller form before they appear on your phone; this arrangement accelerates the overall browsing process considerably.

Where are the speed comparisons?

A browser’s speed depends largely on the hardware capabilities of the phone it’s loaded on. For example, browsing the Web via Wi-Fi on an iPhone 3G is slightly slower than doing the same thing on an iPhone 3GS, because the 3GS has a stronger processor and more RAM memory.

Speed differences (and variability) between browsers are further increased by real-world differences in Wi-Fi and 3G coverage that connects the browser to the Internet.

So what’s the best mobile browser then?

The leading mobile browsers are the iPhone’s Mobile Safari, the Palm Pre’s WebOS browser, and the browser in Google’s Android mobile OS. All three have sleek interfaces and offer easy access to all of their main functions. Of the three, however, Android phones require the largest number of interactions to perform tasks such as saving an image.

While the Palm Pre’s simple interface and its integration of both Google and Wikipedia search in the same bar are interesting, Android phones feature Google voice search technology, too–a nifty feature to use in place of typing a search query.

Though the iPhone has a very intuitive tabbed browsing interface, the Palm Pre beats the competition on this measure, thanks to its ability to load multiple pages in the background or side-by-side. On the other hand, the iPhone wins the beauty contest for its smooth adaptive zooming and quick navigation within a page and between pages.

Adobe Flash powers most of the multimedia and interactive features of modern Web sites, yet it still doesn’t work on many smartphones. Many people complain about the iPhone’s lack of Adobe Flash support, but the iPhone is hardly alone.

The Palm Pre and the BlackBerry Storm don’t have Flash support, and neither do most Android devices (except the HTC Hero). Nokia’s S60 and the Windows Mobile browsers provide limited, scaled-down Flash support.

Full Flash support is something to watch for, if you want to get the full online experience out of your mobile Web browsing.

Interesting developments are occurring in the Google Android realm, and BlackBerry is working on similar things. Nokia is moving forward, as well, developing a new Linux-based mobile OS that will debut on the N900 tablet.

The most impactful tech stories of the 2018 Winter Olympics – Tech...