What the consolidation of mobile app developers means for your business

New York City-based venture capitalist Fred Wilson recently posted an observation on his blog that should fascinate any marketer with even a passing interest in reaching mobile users: None of the top 25 mobile apps in the U.S. is owned by a startup.

What’s more, Wilson observes, according to digital media analytics firm comScore, 10 of the top 12 apps are owned by Apple, Facebook, and Google (with the latter two owning the top six, and eight of the top nine), while Snapchat, the youngest company on the list, is already more than four years old. 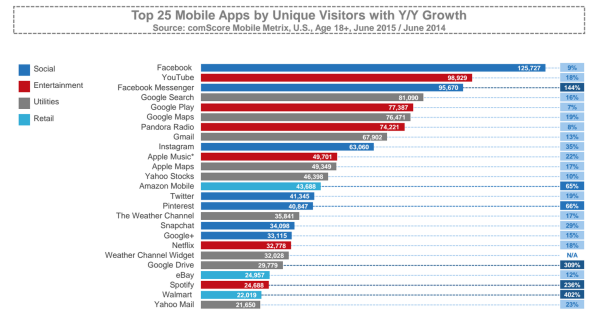 “We are now well into a consolidation phase where the strong are getting stronger and it is harder than ever to build a large consumer user base,” Wilson writes. “It is reminiscent of the late 80s/early 90s after Windows emerged as the dominant desktop environment… Apple and Google are doing that now in mobile, along with Facebook which figured out how to be as critical on your phone as your operating system.”

Also worth noting is that five of the apps are used for entertainment (Spotify, Netflix, Apple Music, Pandora Radio, and YouTube), eight for communication (Yahoo Mail, Google+, Snapchat, Twitter, Instagram, Gmail, Facebook Messenger, and Facebook), three for shopping (Walmart, eBay, and Amazon Mobile), two for navigation (Apple Maps and Google Maps), and two to check the weather, illustrating the limited range of services that have proven most popular with mobile users.

Though Wilson expects something new to come along – like the Internet itself did in the mid-’90s – and break the present oligopoly, he’s not yet sure what it might be.

Meanwhile, the current data seems to indicate that despite appearances to the contrary, marketing departments big and small can rest assured that by focusing their efforts on a handful of established companies – such as Google, Apple, Amazon, and Facebook, which Wilson calls the “big four” – they’re soundly covering their bases and need not worry about every new social networking phenomenon they read about online.

Eric Emin Wood
Former editor of ITBusiness.ca turned consultant with public relations firm Porter Novelli. When not writing for the tech industry enjoys photography, movies, travelling, the Oxford comma, and will talk your ear off about animation if you give him an opening.
Previous articleITBusiness.ca’s 2015 holiday video round-up
Next articleLenovo unveils tablet at CES 2016 that can double as a mobile projector