Microsoft has released the beta version of its Windows 7 Upgrade Advisor, a free utility that tells you if your PC is ready to run Windows 7. It scans your computer, checking internal components, external peripherals, and programs, and alerts you to potential compatibility issues.

It also offers upgrade suggestions, such as which drivers to replace, should you make the move to Windows 7.

It’s a good idea to run Upgrade Advisor, which takes only a few minutes, if you plan to install Windows 7 Release Candidate, which is also available as a free download.

After downloading and installing Upgrade Advisor, you’ll see an opening screen that advises you to connect all of your external devices, such as hard drives, cameras, MP3 players, and so on: 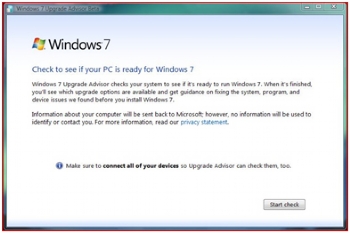 This system runs Vista sluggishly-no surprise given the 1 GB of memory-and based on initial reports from Redmond, I thought it might perform better with Windows 7.

However, a recent PC World Test Center report says that may not be the case. 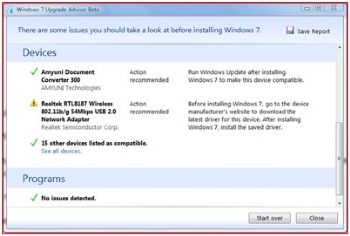 The compatibility check took about 6 minutes and found a few potential issues.

While the Gateway’s processor, memory, and hard drive met Windows 7’s minimum requirements (I expected this), Upgrade Advisor recommended that I download the latest driver for the Realtek Wireless 802.11b/g USB 2.0 network adapter before installing Win 7.

It didn’t find potential conflicts with any installed programs.

Upgrade Advisor also pointed out that Windows 7 doesn’t include Web filtering (Windows Mail and Parental Controls), and it included a link to Microsoft’s Windows Live Essentials site, where you can download the free Family Safety utility.

Initial reaction among PCWorld.com users who tried to install the tool was mixed.

However, “CrazyCrusher” disputed the above comment, claiming the tool does indeed work on PCs running XP 64bit and as well as a Vista.

A similar view was expressed by dennisl59 who ran Windows 7 Upgrade Advisor on Vista Sp1-64 Bit Home Premium w/IE 7 “with no issues.”

Another user “waldojim” has finally installed Windows 7 on their laptop and is “pleased” with the performance.