While participating in a Greater Toronto Area (GTA) electronic fare pilot, the Toronto Transit Commission (TTC) seems to be eyeing a different payment system from the rest of the region.

In a statement, chair Adam Giambrone announced a TTC-hosted public information session this week on an a proposed open payment fare-collection system.

Instead of the traditional fare card, the system “will allow transit riders to use credit or debit cards – even cell phones – at the turnstile or fare boxes.”

However, a prepaid card will also be available for riders who prefer not to use their personal cards, the statement said. 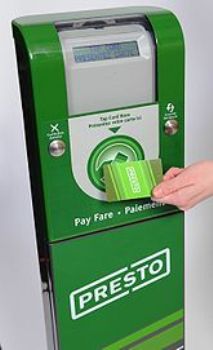 Many will welcome the TTC’s move as a long-overdue step towards phasing out antiquated token and ticket fares, and modernizing the payment system.

But at least one Toronto-based technology analyst doesn’t believe the change is a good one.

The TTC is leaning towards an electronic fare system at odds with the rest of the GTA, noted Rob Burbach, senior analyst at IDC Financial Insights’, Toronto-based IDC Canada’s financial advisory service.

Burbach is an expert on mobile payment systems.

“Why does the TTC need to reinvent the wheel?” the analyst asked. He noted that the rest of the GTA is using an integrated system – the Presto card.

By implementing a different system the TTC would introduce unnecessary cost and complications, Burbach warned. “Going with another system would be a poor use of tax payers’ money.”

It would also negate the advantages of a seamless inter-regional contactless payment system, he said. “Rather than zipping through municipalities using one card, a rider might be required to use another payment device for Toronto.”

ITBusiness.ca repeatedly tried to contact Giambrone, but the TTC commissioner was unavailable.

The transit commission is proceeding with an open payment system parallel with the system being piloted in other areas of the GTA.

In its statement the TTC said it is fully participating in the Presto project and “continues to work with the provincial agency to identify funding to bring fare cards to Toronto.”

“Presto is an easy way to get around the GTA,” according to Mississauga mayor Hazel McCallion.

Mississauga was among several GTA municipalities that initiated Presto trials in 2007.

The program was launched back in 1996 when the province of Ontario agreed to fund Presto implementations — estimated at $140 million — provided regional transit systems pay for the actual machines.

Presto allows users to ride on a participating public transit system without pre-purchasing tickets or passes and without  advance knowledge of each transit system’s fare policies.

The Presto card is the size of a gift or debit card that contains a passive RFID chip. It uses “stored value”, in the form of a common electronic purse, as a medium of payment transaction.

Electronic readers scan a user’s Presto card as he or she rides public transit vehicles or enters a station. The reader calculates the correct fare and deducts it from the card’s balance.

Users can load the cards with cash value via pre-authorized (autoload) payments, by telephone, Internet and at selected retail stores. Full implementation of Presto for GO Transit and other regional transit services is expected by 2011.

However early reports say only 12 TTC stations and no TTC bus lines will use Presto by the end of the 2011 rollout.

Remember last November when the TTC had to slam the brakes on the sale of tokens to curb hoarding of the transit coins by people anticipating a 25 cent fare hike?

By enabling commuters to use their cell phones to purchase transit fares, the TTC could put and end to such speculation, according to Carmi Levy, an independent technology analyst.

Transit users will benefit as there will be shorter lineups at TTC ticket counters in subway stations. Mobile payments can also help the TTC cut costs.

He said debit and credit cards are the preferred payment mode adult Canadians’ use for 45 per cent of their purchases.

The TTC, however, isn’t equipped to take advantage of this trend. Of the TTC’s 69 subway and RT stations only Bloor-Yonge, Eglinton, Queen, Scarborough Centre, Union Station, Islington and Finch have automatic Metropass vending machines. The vending machines do not accept credit cards.

Levy expressed optimism that TTC riders would welcome a shift to electronic payment.