Start-up Millenniata and LG plan to soon release a new optical disc and read/write player that will store movies, photos or any other data forever. The data can be accessed using on any current DVD or Blu-ray player.

Millenniata calls the product the M-Disc, and the company claims you can dip it in liquid nitrogen and then boiling water without harming it. It also has a U.S. Department of Defense (DoD) study backing up the resiliency of its product compared to other leading optical disc competitors.

Shumway would not disclose what material is used to produce the optical discs, referring to it only as a “natural” substance that is “stone-like.”

Millenniata’s M-Disc is made of a stone-like substance that the company claims does not degrade over time.

Related Story | Majority think CDs will be obsolete by 2015

Like DVDs and Blu-ray discs, the M-Disc platters are made up of multiple layers of material. But unlike the former, there is no reflective or die layer. Instead, during the recording process a laser “etches” pits onto the substrate material.

While Millenniata has partnered with LG for the initial launch of an M-Disc read-write player in early October, Shumway said any DVD player maker will be able to produce M-Disc machines by simply upgrading their product’s firmware.

Millenniata said it has also proven it can produce Blu-ray format discs with its technology – a product it plans to release in future iterations. For now, the platters store the same amount of data as a DVD: 4.7GB. However, the discs write at only 4x or 5.28MB/sec, half the speed of today’s DVD players . 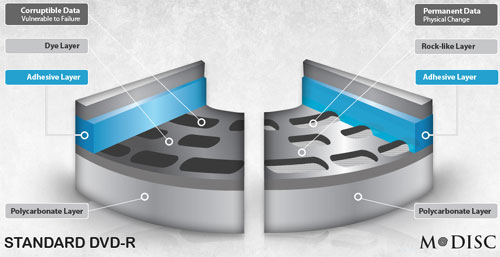 Comparing an M-Disc to normal DVD.

“We feel if we can move to the 8X, that’d be great, but we can live with the four for now,” Shumway said, adding that his engineers are working on upping the speed of recording.

Millenniata is also targeting the long-term data archive market, saying archivists will no longer have to worry about controlling the temperature or humidity of a storage room. “Data rot happens with any type of disc you have. Right now, the most permanent technology out there for storing information is a paper and pencil — until now,” Shumway said.

“None of the Millenniata media suffered any data degradation at all. Every other brand tested showed large increases in data errors after the stress period. Many of the discs were so damaged that they could not be recognized as DVDs by the disc analyzer,” the department’s report states .

Recordable optical media such as CDs, DVDs and Blu-ray discs are made of layers of polycarbonate glued together. One layer of the disk contains a reflective material and a layer just above it incorporates an organic transparent dye. During recording, a laser hits the die layer and burns it, changing the dye from transparent to opaque creating bits of data. A low power laser then can read those bits by either passing through the transparent dye layer to the reflective layer or being absorbed by the pits.

Over long periods of time, DVDs are subject to de-lamination problems where the layers of polycarbonate separate, leading to oxidation and read problems. The dye layer, because its organic, can also break down over time, a process hastened by high temperatures and humidity.

While the DVD industry claims DVDs should last from 50 to 100 years, according to the National Institute of Standards and Technology (NIST) , DVDs can break down in “several years” in normal environments. Additionally, NIST suggests DVDs should be stored in spaces where relative humidity is between 20% and 50%, and where temperatures do not drop below 68 degrees Fahrenheit.

Gene Ruth, a research director at Gartner, said generally he’s not heard of a problem with DVD longevity. And, while he admits that a DVD on a car dashboard could be in trouble, the medium has generally had a good track record.

But Ruth said he can see a market in long-term archiving for a product such as the M-Disc because some industries, such as aircraft engineering, healthcare and financial services, store data for a lifetime and beyond.

Millenniata partnered with LG to provide M-Ready technology in most of its DVD and Blu-ray drives. Shumway said the products will begin shipping next month and should be in stores in the beginning of October.

“We felt it was important that we first produce this with a major drive manufacturer, someone that already had models and firmware out there,” Shumway said.

Unlike DVDs, which come in 10-, 25-, 50- or 100-disc packs, M-Discs will be available one at a time, or in groups of two or three for just under $3 per disc. Millenniata is also courting system manufacturers in the corporate archive world.

“We’re working with some very large channels as we train their distribution networks to launch this,” he said. “At the same time, we’re launching this at Fry’s [Electronics] so consumers can see it and be introduced to this technology.”

This SSD will self-destruct….