Office 365, the cloud-based version of Microsoft Office, was released its public beta version earlier this year, and CEO Steve Ballmer will be commenting on the offering’s future and whether it will continue in beta on June 28.

By now, it has become clear that Office 365 for small businesses (defined by Microsoft Corp. as one to 25 employees) is not offering much that’s “new,” but rather a potentially better way to work, for employees that are increasingly working from outside of the office. The small business edition includes Office Web Apps, Exchange Online, SharePoint Online, Lync Online, and a public Web site.

But for SMBs, a simple user experience is typically most important with a new product. Office 365, despite some glitches, delivers an intuitive platform for businesses to collaborate and work from their desk or on the road.

Office 365’s biggest advantage is that most of its users are probably going in knowing how to use its applications. If you can use Word, you can use the Word Web app, and so on. 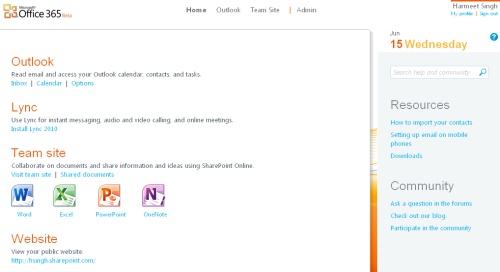 The interface for Office 365 is very simple and users would likely know where to go for what they need immediately.  The main menu linking to Home, Outlook, Team Site and depending on the user, Admin, does disappear from time to time, depending what page you go to, which makes it frustrating to move among your Web apps easily, but generally, you can find what you need.

Microsoft’s claims that you can view Office 365 in virtually any browser proved true—in Chrome, Firefox and Internet Explorer, the layouts and functions remained consistent. Safari 3.1 and later versions are also supported.

If your business has no dedicated IT staff and a non-IT person is taking over administration, the functions are generally easy to use. Adding a user individually was simple and colleagues that are invited in receive a clear e-mail with a temporary password and set-up for them is straightforward. You can quickly add more users and distribute your licences accordingly, along with making the appropriate people fellow administrators, through shortcut links on the admin homepage. 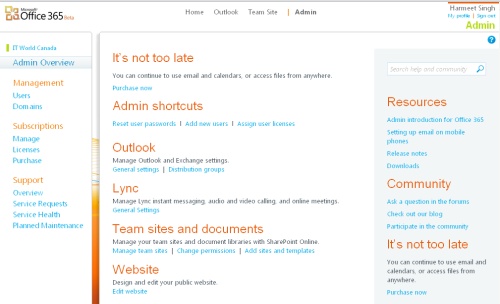 At one point, forgetting your password can become an issue if you’re the only administrator. Office 365 will tell you to contact “Support,” but there was no easy link to the correct service e-mail and the only support out there was in the form of the Office 365 Community where you can post questions or read blogs, but get no immediate assistance. There is a 1-800 service number to call for assistance, but something like resetting a password should be easier.

Importing personal contacts proved simple enough— Office365 lists the steps you need to take to export your contacts from your existing e-mail address, then import then in to the Web version, which only takes a few minutes.

Getting access to your company’s global address book is more problematic. It requires your administrator to first install and run Windows PowerShell and Windows Remote Management then follow some complicated steps that are likely out of the skill range of an SMB administrator without an IT team.

The calendar functions all worked as well as Outlook’s desktop version.

Office 365 includes a “Team Site,” or the SharePoint collaboration platform for teams sharing and working on Word, OneNote or Excel documents or PowerPoint presentations. Uploading documents for sharing was simple enough, but once multiple documents are uploaded, things could get confusing since the search function for finding a document didn’t work well.

The hassle of finding the right version of a particular document, though, is significantly cut down, since multiple users can edit the same document (even simultaneously) and save it. To edit in your browser, you’ll need the latest version of the application (Word, Excel, etc.) but Office 365 will convert your old document quickly, save a new version and bring you back to editing without hassle. 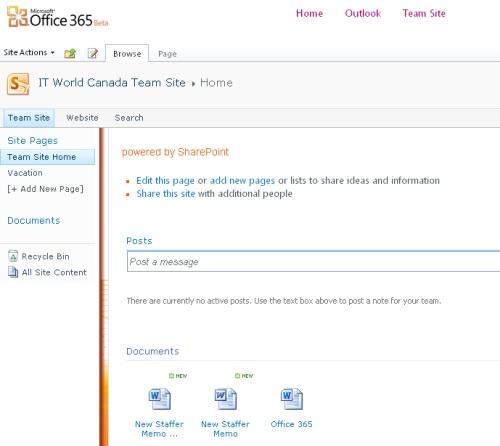 Office 365 also includes Lync Online for video calling, conferencing, instant messaging and presence services. Like the other parts of 365, Lync is intuitive to use and straightforward for businesses looking for an easy, inexpensive way to communicate.

One thing that Microsoft has boasted for the SMB market with Office 365 are some of the Web design capabilities for your public Web site. Businesses that have purchased a domain elsewhere can use it for this public site or have a SharePoint Web address, such as hsingh.sharepoint.com. 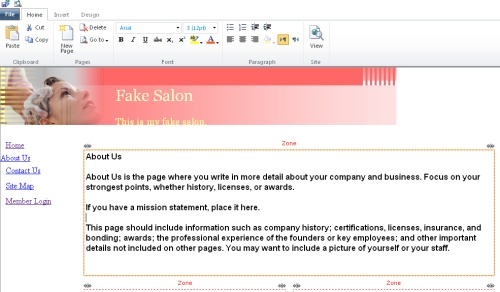 From the admin page, any administrator can launch an editor for the public site. For beginners to design who only require the basics for their Web sites—like contact or pricing information—this is a good offering.

Designing it was very straightforward. Office 365 includes various template “themes” for different kinds of businesses, such as accounting, manufacturing, construction or health and beauty. You can add and delete pages easily and edit one page at a time.

In terms of templates, image and colour choice, it’s quite generic and font choices are very limited, which is frustrating for businesses looking for ways to differentiate their sites from others who use similar templates.

The templates do include helpful tips for what should be placed in each space, which may seem obvious, but are actually if you are completely new to even having a Web site.

Office 365 is priced at $7 per user per month in Canada, a good price for a small businesses considering what they’re getting—but this is in addition to your costs for the desktop Office suite. Microsoft has also said that pay-as-you-go pricing options will be available.

Office 365 is mainly good for small businesses with a very small IT staff or no staff at all. It’s intuitive for users, assuming they’re already using Office on their desktops, so there isn’t much of a learning curve, which will save a lot of time.

The usefulness of having your Office documents and applications in the cloud will vary from business to business. For now, checking out the beta version (or trial period after the beta end is announced), would be a good choice.

Harmeet Singh
Harmeet reports on channel partner programs, new technologies and products and other issues relevant to Canada's channel community. She also contributes as a video journalist, providing content for the site's original streaming video. Harmeet is a graduate of the Carleton University School of Journalism.
Previous article
Five new productivity tools for Google Apps
Next article
Internet phone scam can cost you over $5,000 says Microsoft