Employees taking furtive glances at smartphones during office hours could be checking sports scores, Hollywood gossip or how sales are going on eBay.

Or, they could be doing some foreign exchange trading through a service provided by Toronto’s Oanda Corp.

The company said Tuesday that the latest version of its free fx Trade Mobile app for iOS and Android platforms has been improved to allow technical analysis and advanced charting using specialized mathematical formulas. Traders use these calculations to predict currency values and trends.

Related
How SMBs can cut through the mobile commerce hype 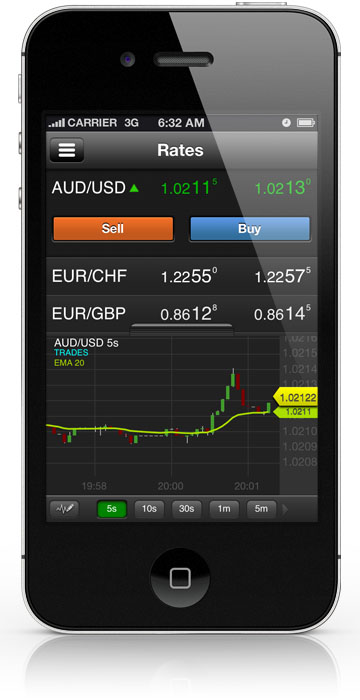 “A year ago when we started seeing demand for this, we were pretty surprised that people wanted to do advanced calculations and charting on small screens.” But after checking customer demand Oanda responded.

The charting features are added to the existing capabilities, which include real time news fees and alerts for limits set on subscriber accounts such as take profit orders and margin notifications.

Oanda offers desktop and mobile trading services to individuals, as opposed to financial trading houses. Most of its customers, Young said, are speculative currency traders. Oanda makes money on the difference in prices (the margin) between sellers and buyers

Founded some 10 years ago by a University of Toronto computer science professor and a Swiss economist, the company started by posting exchange rates banks used when transferring money to other financial institutions. Initially some of the information gleaned was sold to corporations, but eventually Oanda switched to setting up an online platform allow individuals to make currency trades. Most financial houses insist on large volume currency trades, but Oanda lets individuals buy and sell in small units.

In February it add the ability to make commodity, stock index, and fixed income contracts for difference (called CFDs) on its trading platform.

Increasingly its subscribers are going mobile, Young said, in part so they can keep trading while at their full-time jobs. Some 30 per cent of Oanda subscribers use the mobile app, he said, accounting for about 15 per cent of the volume of trades.

The current mobile apps are built on native iOS or Android platforms, Young said, but his company is working on an HTML5 version that can run on any operating system.

The updated mobile app is only for iOS and Android devices. The existing app for BlackBerry 7 wasn’t updated. A version for the new BlackBerry 10 operating system is being evaluated. However, Young said one thing the company is keeping in mind is there has been “steep decline” in usage by BlackBerry subscribers.

Howard Solomon
Currently a freelance writer. Former editor of ITWorldCanada.com and Computing Canada. An IT journalist since 1997, Howard has written for several of ITWC's sister publications, including ITBusiness.ca. Before arriving at ITWC he served as a staff reporter at the Calgary Herald and the Brampton (Ont.) Daily Times.
Previous article3 things you need to know about BlackBerry’s earnings report
Next articleApplications for TechWomen Canada mentorship program due Friday