Sometime last year, a presenter talking about smartphones used to purchase products got a lot of laughs for saying that people still using the Motorola Razr have defintely fallen behind the times.

If the original Razr cut a stunning profile and sold millions of units back in the early 2000s, by contrast the new Razr, at first glace, could be mistaken for a handful of the many touchscreen smartphones in the market today. However, once you take the Motorola unit in your hand you’ll immediately feel the difference.

Despite its dimensions (130.70 mm x 68.90 mm x 7.1 mm), it is incredibly light tipping the scales at a mere 127 grams (by comparison, the iPhone 4S is 9.3 mm thick and weighs 140 grams). It doesn’t feel bulky at all and it slipped right into my shirt pocket. Motorola also used splashguard technology to keep the phone reasonably watertight in case you get caught in the rain or spill a drink on it.

Despite being very light, the Razr has a solid feel to it thanks to its stainless steel chassis and Kevlar fibre back with also gives the phone an attractive and grippy feel to it. The Razr also now sports a sleek looking Corning Gorilla Glass front with a diamond-cut Motorola nameplate.

The Super AMOLED Display and camera

The phone has an 8 megapixel camera and a 1.3 megapixel front facing camera capable of 1080p video capture. The cameras take excellent shots outdoors and even in some low-light conditions indoors. There is almost no shutter lag between shots.

The Razr is also capable of smooth video capture at 1080p resolution.

Many people may find Motorola’s social networking interface MotoBlur quite annoying. While the Razr still retains some MotoBlur widgets, the phone runs on Android 2.3.5. The Razr’s interface allows user to resize widgets. Users can also now scroll through the widget contents.

The Razr come with MotoCast. MotoCast lets you access remote files on your PC without having to upload or sync your files.

MotoCast allows users to access content such as PowerPoint files or iTunes playlists. The Razr has has plenty of capacity (1GB of RAM, 16GB of on-board storage, and a preinstalled 16GB MicroSD card).

Web pages loaded up in a matter of seconds. Some tests found the Razr capable of achieving an average of 1.98 MBps for download speeds and 3.01 MBps for upload speeds.

The Razr is supposed to have a talk time of 10 hours but I was not able to test that out.

Hands-on, I found the Razr to be capable of running through battery life quite quickly. Keeping the social media apps on, occasionally surfing through new sites and making several phone calls throughout the day, I found the phone ate through half the battery life by later afternoon.

Luckily the Razr has Smart Actions, a new app which lets user set reminders to notify you when you should recharge your phone (for example, when you go to bed). If you forget to plug your phone in, you can set a Smart Action called “Nighttime Battery Saver,” which adjusts your phone’s network and screen settings to make your battery last longer the next day.

Smart Actions aren’t just about saving battery life. You can create different profiles (Work, Home, Workout, and so on) and set rules for each scenario. If you don’t want your phone to ring out loud when you’re at work, you can set a rule called Quiet Location so your phone automatically goes into silent mode during work hours. Overall, Smart Actions is an easy-to-use, clever app. 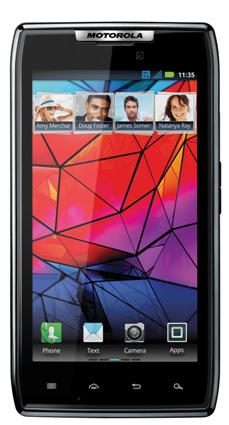 Although the Razr look is not unique it is quite a sleek and sexy phone. iPhone users may find it a bit on the large side but its low profile and lightness makes it a breeze to carry throughout the day. The phone has top notch build quality.

It comes with a terrific set of useful features and a large display that comes out with clear and vivid images.

It has excellent call quality but battery life might be an issue (just as it is with many 4G and LTE phones). As such this makes me worry a bit about the decision to use a non-replaceable battery on the Razr.