Firefox 3.5 makes browsing a delight … and much faster

If you already use Firefox you’ll want to upgrade right away. If you’re not a Firefox user, this version represents a very good opportunity to give the browser a test run.

For many people, the browser wars are all about one thing: speed. There’s no doubt that version 3.5 of Firefox is significantly faster than version 3. Pages load noticeably more quickly for a number of reasons, not least because Mozilla built a new JavaScript engine called TraceMonkey for this version of Firefox.

How much faster is open to debate. Mozilla says it ran the industry-standard SunSpider JavaScript Benchmark, which measures how quickly browsers render JavaScript, on versions 2, 3 and 3.5 of Firefox, and asserts that the newest version is more than twice as fast as Firefox 3 and more than ten times as fast as Firefox 2 on the test. Other testers have reported similar results.

But putting aside any speeds-and-feeds specs, I can tell you that from the user experience, Firefox 3.5 is lightning fast — it seems to me about comparable to the recently-released Safari 4.0 for the Mac.

When you browse the Web using it, nothing about the session is stored — no history, no cookies, no temp files, no forms information, no search information, nothing that can show where you’ve browsed or what you’ve done. To turn the Las Vegas tag line on its ear: What happens in Firefox doesn’t stay in Firefox.

Firefox then closes your existing tabs, and immediately launches a private browsing window. From here, browse the Web as you normally would, and nothing of the session will remain.

To end the Private Browsing session, close Firefox as you would normally, or else select Tools –> Stop Private Browsing, or else press Ctrl-Shift-P. The current session ends, and Firefox launches with all of your previous tabs intact.

There are other nice touches for those who don’t want other people to know what sites they’ve been visiting. You can remove all the traces of a site you’ve visited while you were in a normal browsing session.

This eliminates it not just from the History list, but also kills all traces of the browser on your computer, including cookies and temp files, search history, forms you’ve filled out, and more.

To use this feature, first open your History list by choosing History –> Show All History or by pressing Ctrl-Shift-H. Then right-click the site you want to remove, and from the menu that appears, select Forget about This Site.

You can also remove all of your history and other data related to your browsing session from the last few hours or last day. Select Tools –> Clear Recent History, or press Ctrl-Shift-Del. From the drop-down list on the page that appears, choose either the last hour, the last two hours, the last four hours, today, or everything.

You can also fine-tune what to clear by clicking the Details button; it lets you determine what data to remove — browsing and download history, forms and search history, cookies, cache, logins, etc.

The new version of Firefox has some nice interface tweaks as well. Primary among them is the ability to re-open windows that you’ve previously closed — functionality that was previously available only through add-ons.

Select History and look for two items at the bottom of the menu — Recent Closed Tabs and Recently Closed Windows. From those menu items, select the tab or window you want to re-open. Note that this works only for tabs and windows you’ve closed in your current browsing session. After you end a session, you won’t be able to restore them.

New: the ability to re-open windows that you’ve closed in your session

Firefox 3.5 also supports watching video and listening to music directly in a Web page, without having to launch any plug-ins, by supporting the HTML 5 audio and video elements. The Web page itself plays the video, and includes audio and video controls. You can even download the video or audio by right-clicking and saving it. 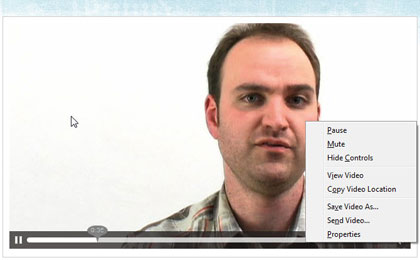 Playing a video directly on a Web page

For all of this to work, though, the elements have to be in the page itself, which means the developer has to code it that way. At the moment, there are very few pages that contain these kinds of video and audio elements; only time will tell whether they become popular.

Firefox 3.5 has taken a page from Chrome, letting you drag a window out of a browsing session and launch it as its own browsing session, or else drag a tab from one browser session into another to combine them. In addition, when you drag a tab to reposition it among other tabs, you see a thumbnail of the tab as you move it.

Firefox now also supports what is called Location Aware Browsing, which tells Web sites your location so that they can deliver geographic-relevant information for online maps or to help when you’re searching for local information and businesses.

It works like this: Firefox finds your IP address, gathers information from any nearby Wi-Fi hot spots, and sends that to Google Location Services (its geolocation service provider), which then tries to determine your location and shares that information with the Web site you’re visiting.

All this happens only if you give Firefox permission; Mozilla claims that it’s done in a way that protects your privacy. 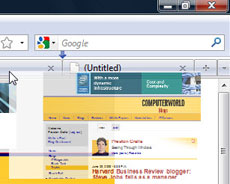 When you reposition a tab, you see its thumbnail as you move it.

Version 3.5 also supports downloadable fonts, and CSS support has been improved. And the “Awesome Bar,” which is Firefox’s name for the Address Bar, has gotten a slight change that power tweakers will appreciate: You can now more easily filter results as you type text into the bar.

If you’re a Firefox user, this upgrade is a no-brainer. Browsing the Web is significantly faster, the ability to re-open previously closed tabs and windows is a major improvement, and as for PrivateBrowsing … I won’t delve into your personal life, but if you’ve got a need to keep some of your browsing a secret, you’ll want this feature.

The video is a nice-to-have, but won’t be particularly useful until sites start using it. The same holds true for Location Based Browsing and some of the other improvements.

Note to current Firefox users: As with previous Firefox updates, some of your add-ons, such as Google Gears, might not work until they are updated to work with version 3.5.

Still, all in all, this is a major improvement over Firefox 3. Even if you’re not currently a Firefox user, you’ll want to give it a try.