The latest report from the Data Catalyst team at the MaRS startup accelerator in Toronto follows the money, analyzing startup data around funding and revenue in the Toronto startup ecosystem. It doesn’t have an all-encompassing, but with 597 companies reporting it is an interesting dataset from which to draw trends. And several interesting ones emerge.

Toronto is an incredibly multicultural city and prides itself on its diversity, yet the data shows when it comes to raising venture capital, white men have a much easier go of it. And for a startup at the early financing stage, access to capital can make a major difference between success and failure, or to the pace of the company’s development.

“For an early-stage company, two key factors are vital to sustainability: the amount of funding that can be raised, and the amount of revenue brought in,” write Adam Jabobs and Sameer Vasta in a blog post. “While the ideal situation is a mix of both, the reality is that the mix of money can be quite different depending on the sector and stage of development.

When the data is examined by founder origin, startups with all Canadian founders were most likely to be funded at the highest level, with 27 per cent securing funding of over $500,000. Startups with a mix of foreign and Canadian founders fared relatively well, but 59 per cent of purely foreign-led startups failed to secure any funding at all, and just 16 per cent were funded at the highest level. 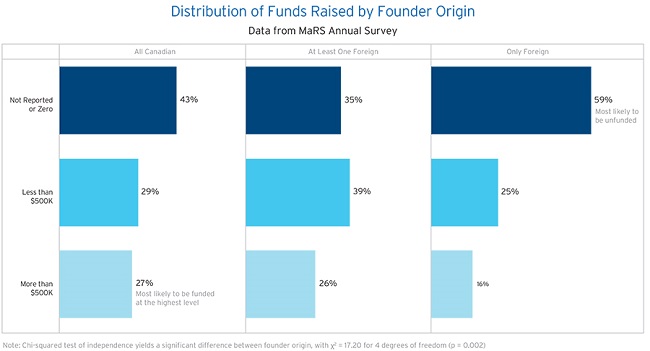 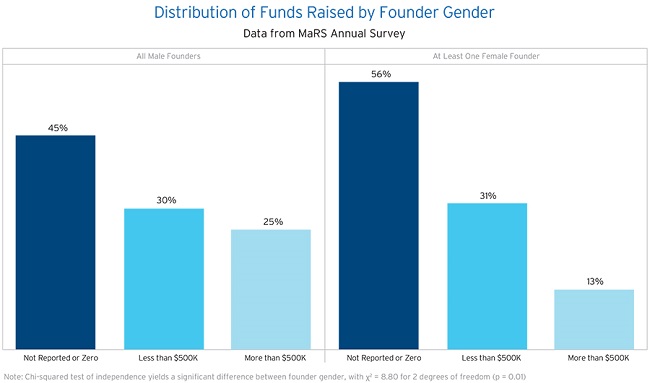 “When it comes to founder origin and gender, these differences raise difficult questions: do we have issues with access to funding in Toronto? Does the demographic makeup of our venture capital community play a role in this discrepancy?” write Jacobs and Vasta.

There are no easy answers, but in light of this report these are questions Toronto’s startup community will need to consider.

Jeff Jedras
Jeff Jedras is a technology journalist with IT World Canada and a member of the IT Business team. He began his career in technology journalism in the late 1990s, covering the Ottawa technology sector for Silicon Valley North and the Ottawa Business Journal. He later covered the technology scene in Vancouver before joining IT World Canada in Toronto in 2005, covering enterprise IT for ComputerWorld Canada and the channel for Computer Dealer News. His writing has also appeared in the Vancouver Sun & the Ottawa Citizen.
Previous articleCyber threats don’t worry women as much as men: Kaspersky
Next articleBehavioural analytics can save you from a bad hire