Deloitte gives itself an ‘A’ for 2015 predictions

And now, with a new year underway and another round of predictions just around the corner, there’s no better time to look back and ask: just how accurate were last year’s predictions, anyway?

Pretty darn accurate, it turns out – by the company’s estimation, more than 80 per cent.

Every year Deloitte evaluates the accuracy of its predictions for the previous year, Duncan Stewart, the Toronto-based director of TMT Research for Deloitte Canada and co-author of the 2015 report, tells ITBusiness.ca.

“We got a lot of things right,” he says.

The precipitous drop in 2014 was the result of one “really bad prediction,” Stewart says, for which he takes full responsibility: he projected a rise in eVisits, where instead of seeing a doctor in person, many patients would electronically submit a form that would then be processed by a computer.

“Our belief was that it was already fairly big in the States, and about to become big [in Canada],” Stewart says. “It turned out that our estimates of how big it was in the States were way too high… and the year-over-year growth was absolutely minimal, so it killed us. We ended up getting something like a one out of 10 for that.”

In all, Deloitte made 13 predictions for technology, media, and telecommunications in 2015, nine of them relevant to ITBusiness.ca readers. (We decided to ignore the three media predictions and the Euro-centric “Click and Collect booms in Europe.”)

The Internet of Things really is things, not people

In its report, Deloitte predicted that in 2015 one billion wireless Internet of Things (IoT) devices would be shipped, an increase of 60 per cent from 2014, for a total base of 2.8 billion devices. These devices’ IoT-specific hardware would be worth $10 billion, the report said, while services enabled by the devices would be worth about $70 billion.

However, despite the best efforts of CES, the report predicted that the vast majority of IoT users would be businesses, not consumers – and, Stewart says, it was right.

Rather than smart appliances, he says, the bestselling IoT devices are the tracking products used by shipping companies, or the vehicle telematics devices used by the insurance industry.

“There are people who are interested in the connected home and the consumer-facing Internet of Things, but when you compare it to global sales of smartphones or TV sets… [it] remains very much a niche phenomenon,” Stewart says. “Most people don’t want to program their dishwasher.”

By contrast, the devices are worth tens of billions to the insurance companies who use them to collect data from millions of customers, or to international conglomerates who can use them to track every one of their assets around the planet, he says.

In its report, Deloitte predicted that in 2015 the active base of non-military drones worth at least $200 each would exceed one million units for the first time, and that total industry revenues would be worth between $200 and $400 million.

“It was quite funny, because of course at the start of the year everybody was very excited about drones,” he says.

However, two challenges to the popularity of drones soon became apparent, he says: one, people often flew them where they weren’t supposed to, spying on neighbours, disrupting commercial, military, and commercial aircraft, and even crashing into people on the ground.

The other problem is that consumers quickly began to learn that their drones had very few practical applications, Stewart says.

“When you fly it one or two times it’s kind of fun, but it doesn’t really do all that much,” he says. “I think for a lot of consumers, drones are the 2015 equivalent of the bread maker… you make bread, you go ‘that’s cool,’ and then you put it in the garage next to 13 other things that you never use again.”

3D printing is a revolution: just not the revolution you think

Rather than leading to a “factory in every home,” Deloitte’s 2015 report predicted that 3D printing would spark a revolution in the enterprise market – and not by producing functional parts, but by giving manufacturers a fast, convenient way to produce prototypes for development and marketing purposes, Stewart says.

There is a wide gap between the popular conception of 3D printing as a factory-lite technology that could be used to manufacture aircraft or automobile parts (even though the FAA has only approved one 3D-printed component for commercial use, Stewart notes), and the reality, in which it’s utilized by industries as diverse as education and healthcare, he says.

One example is medical training: many hospitals now train their surgeons by 3D printing scale models of their human patients, complete with hollow tubes representing the vascular system that can be connected to a “heart” and bleed if the surgeon practicing on them makes a mistake.

“When they actually go in and cut a real kid open, they’ve already done it many, many times in practice,” Stewart says. “It drives me crazy… people get all excited about the fact that they can use a 3D printer to make a Star Wars character with their face on it… meanwhile, there’s real 3D printing that’s actually saving human lives, and nobody pays attention.”

Smartphone batteries: better but no breakthrough

“I hate it when we’re right,” Stewart says, commenting on Deloitte’s prediction that the lithium ion batteries which have long been the smartphone industry standard would increase their power capacity by no more than five per cent between 2014 and 2015.

The problem, Stewart says, is that rather than following Moore’s Law – that is, doubling in power roughly every two years – lithium ion technology is chemical-based and doesn’t scale the same way computing technology does. The easiest way to increase the power of a lithium ion battery is to increase its size – and consumers are demanding devices that are smaller and thinner, not larger.

We’re also using our phones more than ever before, so that when a breakthrough does lead to an extra few minutes of battery life, it pales in comparison to the extra time spent texting, he says.

Though every year seems to bring another Huawei promising increased battery life and faster charging, Stewart says he has yet to see such claims bear substantial fruit.

“We keep seeing stories about how any minute now we’re going to have a phone that charges in five minutes and lasts for five days… and I have looked at a number of phones that claimed to do that, but they don’t,” he says. “I never know people who buy them, I never see how many have sold, I don’t know if they’re phones that I actually want to use. That’s why we wrote the prediction.”

Nanosats take off, but they don’t take over

Deloitte was not the only organization to predict the widespread adoption of nanosats – tiny (relatively speaking) satellites that weigh between 1 kg and 10 kg – but it was the least optimistic, Stewart says, with its 2015 report projecting that by the end of 2015 more than 500 nanosatellites would be in orbit.

Needless to say, that didn’t happen.

“We predicted that there would be a small number of nanosats launched in 2015, but that it wouldn’t be an explosion,” he says. (For comparison, in a 2014 article the Economist predicted that 1000 nanosats would be in orbit by 2019.)

“Nanosats did even more poorly than we thought,” Stewart says. “We were already the most pessimistic in the world, and we were still too high.”

Deloitte “nailed” this one, Stewart says. After roughly a decade of consumer-driven technology – for example, consumers were the first to adopt touchscreen smartphones and tablet computers, then drive further development with demand for increasingly powerful devices – enterprises have once again become the primary driver of technological advancement.

Not only did this prediction come to pass in 2015, Stewart says, it’s formed the foundation for a prediction in 2016: that 80 per cent of the largest 100 enterprise software companies will be including cognitive technology somewhere in their portfolios during the next 12 months, effectively pushing the development of artificial intelligence – machine learning, language processing, voice recognition – in a way that consumers aren’t interested in doing.

“Sometimes the consumer leads,” Stewart says. “But when it comes to things like artificial intelligence… drones, 3D printers, the Internet of Things… the enterprise is the first adopter of these new technologies, while the consumer follows.”

You could be forgiven for thinking Deloitte was overestimating this one – we certainly did – but no, the organization predicted that for the first time, one billion smartphones would be purchased by consumers who already had one in 2015 – and they were right, Stewart says.

Estimating that 1.5 billion phones were sold throughout 2015, Stewart says that around one billion were purchased by users upgrading their phone.

Speculating on the possible reasons, he says that many consumers have eagerly adopted phablets, those hybrid devices that manage to replace both the iPhone and iPad at the same time; that others might be replacing a broken screen; that it’s a status symbol among younger users.

“Nothing lights my kids’ eyes up like getting a new phone for Christmas,” he says.

In the U.S., Stewart says, carriers are increasingly encouraging customers to lease their phones, much like a car, rather than signing contracts in which they’ll eventually own them. After a year of use, the customer is invited to trade in their leased phone in for a newer, more advanced model – free.

And as Deloitte discovered in a 2015 survey of American and Canadian smartphone users, 26 per cent of Canadians and 30 per cent of Americans said they planned to buy a new phone in the next 12 months.

In its 2015 report, Deloitte predicted that by the end of 2015, five per cent of the 600-plus million users with near-field communication (NFC)-equipped phones would be using them at least once a month to make in-store payments, essentially using their phone as a credit card.

“Nope,” Stewart says. “We were wrong… we thought that… not everybody, but 15 or 20 percent of people with the right phones would be paying monthly. The actual number looks like three or four percent.”

It turns out that people, even when they already have the ability to pay for something using their phone, are more reluctant to do so than Deloitte researchers thought, he says.

The connectivity chasms deepen: the growing gap in broadband speeds

Like the lack of improved battery technology, Deloitte correctly, and tragically, predicted this one: that while the global number of broadband-connected homes would grow by about two per cent to 715 million by the end of 2015, and that while average broadband speed would increase by between 15 and 25 percent, those numbers would obscure a significant gap between the digital haves and have-nots.

The implications for service providers, or organizations that rely on the Internet to deliver their product to consumers, are numerous, as they consider the range of broadband speeds households are able to get. Meanwhile, regulators should consider how technology affects the cost per megabit. Households with access only to ADSL broadband don’t just have lower speeds, the report notes – they pay significantly more per megabit as well (see below). 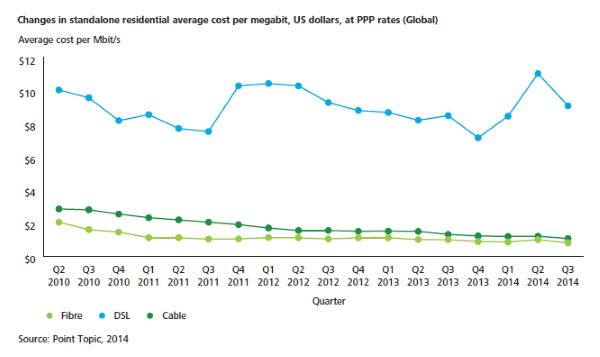 Eric Emin Wood
Former editor of ITBusiness.ca turned consultant with public relations firm Porter Novelli. When not writing for the tech industry enjoys photography, movies, travelling, the Oxford comma, and will talk your ear off about animation if you give him an opening.
Previous article
Microsoft to finally end support for Internet Explorer 8, 9, and 10
Next article
IoT in the city: Backstage interviews at Technicity 2015